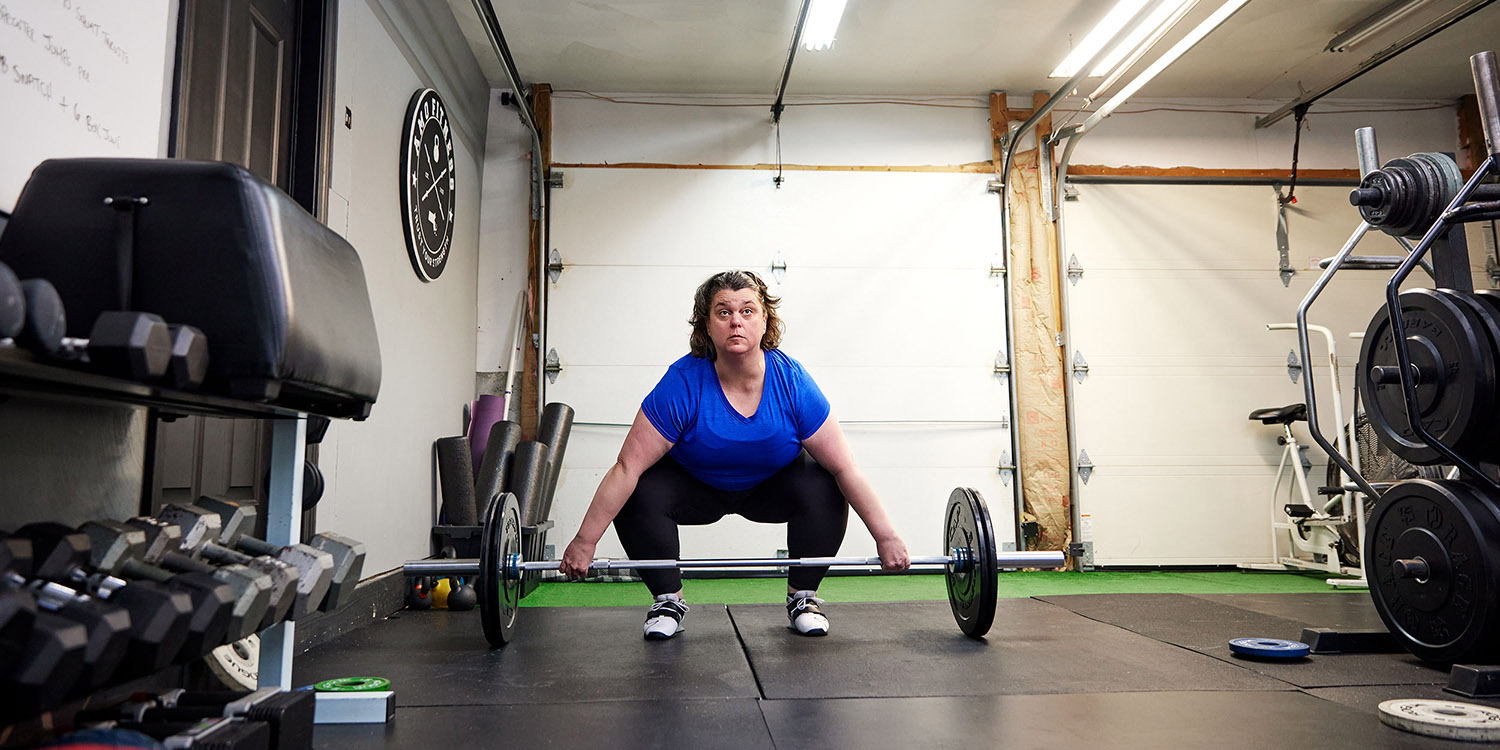 Need another way to use your brain? Try "nerdy lifting"

So it may come as a surprise that for a few months back in 2017, Conaway hit a major athletic milestone that few ever accomplish: she (briefl­y) held a national record.

“What I realized I like doing is lifting heavy weights over my head,” she says.

Conaway’s passion for weightlifting and competing started when she decided to join a gym about 10 years ago and work with a trainer on basic strength exercises. Every once in a while, the trainer would throw Olympic lifts into the lunge and bicep curl routines. The lifts, called the snatch and the clean and jerk, are the kind you see when you watch the Olympics, where the lifter ends up with the bar over their head. (With the snatch, it’s in one quick movement. With the clean and jerk, the bar first comes to the chest and then over the lifter’s head.)

“He told me he thought I could do these because to be a weightlifter, you need to be strong, ­flexible, and fast. He said, ‘You’re two of these things: strong and fl­exible,’” she jokes. “He really felt I could do it. It’s such a great lesson for us educators. Because of his confidence in my ability to do it, I was like, OK, all right. Normally, if I failed at something, especially physical, I’d be like, I’ll just do something else, but instead, even though there are a lot of things that can go wrong from the ­floor to over your head, I said I’d try learning it.”

Conaway says Olympic weightlifting is considered the “nerdy kind” of weightlifting because it can be more technical than powerlifting. (Powerlifting involves squats, bench presses, and deadlifts.) “First of all, who knew there was a ‘nerdy’ kind of weightlifting? And secondly, of course I would gravitate towards the nerdy kind of lifting, even though I had no idea it was considered nerdy at the time.”

Nerdy training turned into serious competing, which now includes working out three to four times a week with her trainer and a team, sometimes at home in her basement, where the low ceiling is a clearance challenge.

“As I mentioned, you have to get the weights over your head so I can’t use the fullsize plates or I’ll hit the rafters,” she says. “I have to use 7,000 tiny plates on the bar.”

And what about the national record Conaway brie­fly held?

“In 2017, all of the weight classes were redone at the international level. In the United States, they decided that rather than try to equate ‘this person had this record so what would it be in the new weight class,’ they just started over,” she says. She qualified for the first national competition. There were no records to beat and she was the only person in her age and weight class. “I did have to qualify and make one of each lift, so it wasn’t a total gimme, but it was pretty close. But still, I held the record for about six or so months.”

One of the things Conaway says she loves about the weightlifting world, or at least the one she’s orbited in, is that there’s room for everyone. “The vibe is so welcoming,” she says, especially from other female lifters she’s met over the years at competitions, like her hero, Sarah Robles, a bronze medal winner at the 2016 Summer Olympics in Rio de Janeiro.

“Yes, you’re competing, but you’re really just competing against yourself. You’re trying to do your personal best,” she says. “Your success doesn’t take away from anyone else. We joke that it’s a bunch of adults involved in parallel play. I once competed against an 85-year-old woman. It was fantastic. That was the first time I didn’t come in last. I beat the 85-year-old. She said I was graceful. She was the first person who ever said that.”

When Conaway’s not lifting, she’s cooking or playing bass. During COVID, she also learned about canning and has kept at it.

Having interests outside of the education world is important, she says. “I don’t do as well at my job if I don’t have other things in my life. I need that downtime. It’s a different way of using my brain and my body. And we all have an obligation to current and future educators to model what we aspire for them, which is a well-rounded life.”