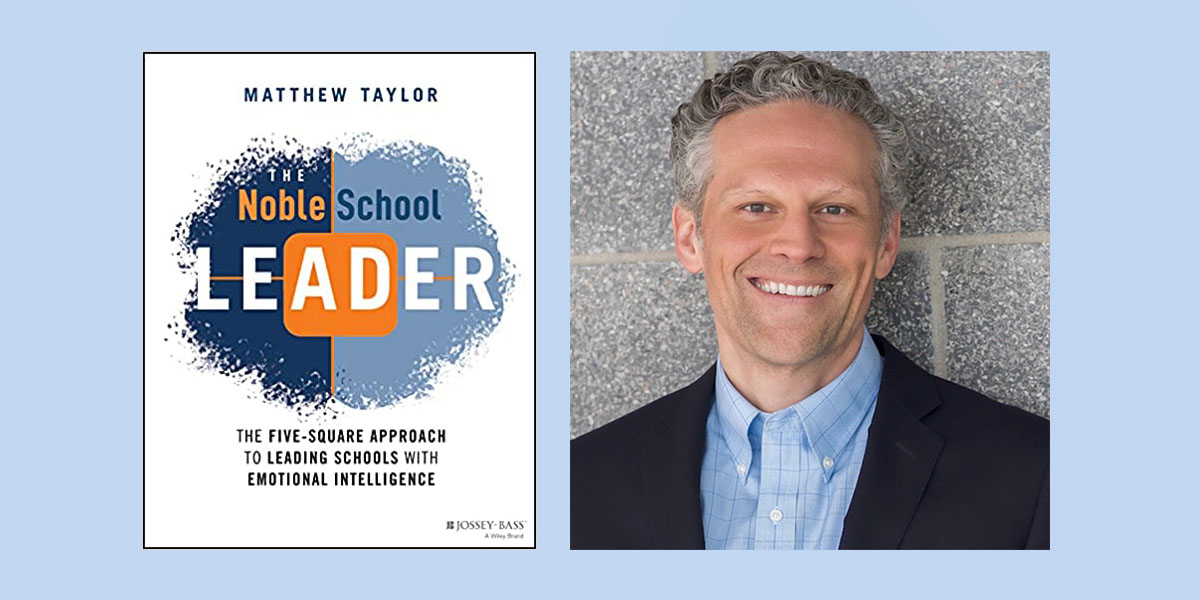 When Matthew Taylor, Ed.M.’98, was the principal of a middle school, he knew he needed to step back from constantly doing other people’s jobs and instead carve out more time for his own work. But knowing and doing are two very different things, and Taylor often found he fell short when it came to delegating. Taylor spoke to Ed. about his new book, The Noble School Leader: The 5-Square Approach to Leading Schools with Emotional Intelligence, and the ways that mindsets can support school leaders, but sometimes — like with his own “doer” mindset — they can also get in the way.

You write that education leaders can work through limiting mindsets on their own, but sometimes they can’t, and instead hit a wall. What do you mean by this?
Every school leader experiences the need for this approach when they have been working hard to grow technical leadership skills and inexplicably hit a brick wall. We double down on skill and knowledge building over time, and still, there’s no movement. As managers we begin to assume that our leaders may not have what it takes, or that there’s some fixed trait that will keep them from getting there: They just have a low bar, or their awareness is too low. As leaders, we just can’t figure out why we don’t do something — like delegate to our teammates or show vulnerability — that we deeply want to do. Or we assume that some competencies are just not our strengths and that we are fixed in certain ways: I will never be good at conflict. That’s just the way I am.

What are the mindsets you write about?
The transactional leader, the unintended enabler, the negative controller, the pacesetter, the doer, the imposter, and the implementer.

Give us some examples of how these mindsets play out.
These mindsets are basically stories we tell ourselves that get in our way from reaching our potential. Unintended enablers tell themselves that they will just never be good at dealing with conflict. Negative controllers assume people who struggle are the problem rather than the conditions for growth that are created for them by leaders or teachers. Implementers sometimes become so reliant on the “playbook” that they sometimes doubt whether they actually have their own vision. These are what I call self-limiting mindsets — our stories that become obstacles to building new habits.

Which were you when you were a principal?
Where to start! I struggled with several of these mindsets at different times in my development. In chapter two of the book, I share my own brick wall challenge as a doer. Even as a third-year principal, I could not consistently hold sacred work time during a school day because I was responding to crises in the building. I was increasingly aware that I was doing work that others should be doing, and that I needed to delegate that work. I had attended some really good delegation training and had, on paper, strong protocols and systems for delegating tasks and managing others to outcomes. I was highly motivated to delegate more, but something was holding me back. I knew that I did not like to ask other people to work harder, but I was unable to figure out why that was getting in my way, given my desire to change and the delegation skills I had in my toolbox.

You write that in order for leaders to change these mindsets, they need to address deeper, personal obstacles. You focus on five areas for reflection. What are they?
I start with reflecting on core values in context — why we care and what drives us — which I refer to as our “standard.” I believe that our values are the source of our power as leaders and human beings. Reflecting on how we are living, in alignment with values, helps us to harness our power to change habits. From there we move to a deeper reflection on what I simply refer to as our “stuff” — what triggers, emotions, and stories lead us to the default habits that hold us back.  This is all self-awareness work.  In a nutshell, I help people answer the question, “What’s my standard and what’s my stuff?” Once we can answer that question more deeply, we can then explore self-management — internal strategies that support us to interrupt the habits of thought and action that hold us back and replace them with new ones.

I call these three reflections “self-work.” From there we shift to the “other work” — reflections on interpersonal engagement. The first focuses on social awareness: what we need to know about others before we take action. The last deep reflection focuses on relationship management, which guides us to choose the most effective engagement strategy in the moment, based on our awareness of others and our awareness of self, to reach our goals.

Imagine you’re a superintendent and you see that one of your principals is struggling as a leader. They seem “stuck” in one of the mindsets. How do you approach that principal without upsetting them or making them defensive?
Great question! This kind of leadership development is deeply personal work. It requires real relational trust between a manager and report. It also requires a working relationship in which the manager developing the report is the norm. If these conditions do not exist, I would direct that manager to step back and re-norm with their report on their working relationship.

You’ve said we shouldn’t see these limiting mindsets as a flaw. What do you mean?
One thing that I would stress is that we are talking about leadership competency and not a character flaw. And I would normalize this kind of learning. Everyone hits a wall at some point when building competencies. As a sector we have lost too many high-potential leaders because they hit their brick wall, their manager doesn’t know how to support their growth, and it is assumed that the leader doesn’t have what it takes. We need this kind of development toolbox to build adaptive leadership competencies and more equitable conditions for learning.