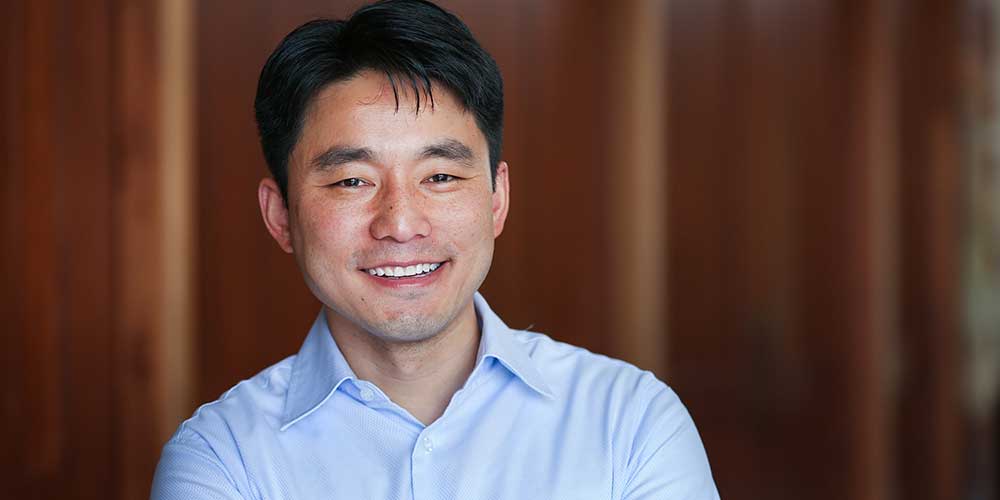 A look at what influenced one faculty member’s career.

An early childhood expert — inspired by Mister Rogers — describes the meaning of "high quality" in early education, the lasting legacy of Fred Rogers, and the power of "deep and simple" interactions between caregiver and child.

People are often influenced by the teachers they had growing up. Junlei Li certainly was, but in the “if I ever teach, I won’t teach that way” kind of way. He did become a teacher, after a circuitous route that started with computer science and ended with him finding Mister Rogers as an adult. Now at the Ed School, Li talked to Ed. about working at the Fred Rogers Center for Early Learning and Children’s Media, Les Mis, and staying simple.

Where were you born?
I was born in Shanghai, China. It was during the tumultuous final years of the Cultural Revolution. My parents, like millions of young college students, were in government-mandated exile in distant farmlands. I grew up in different places and different households largely separated from one or both of my parents. I came to the United States when I was 16.

What’s a childhood memory that had a lasting impact on you later as an adult?
As my living situation fluctuated as a young child, the one continuity that stayed in my life was listening to nightly radio broadcasts of Western classics over dinner. Few people had TVs back then in China, and there were only a few radio stations (like the early days of radio broadcasting in America). This was how I got to know David Copperfield and Les Misérables. I identified with the experience of the displaced orphan who relied on the kindness of neighbors, teachers, and distant kin. So it was natural that my wife and I decided to adopt two children, and I spent a lot of my professional life working and learning in orphanages.

What’s a childhood memory that had a lasting impact on you as a researcher and educator?
I have the vivid memory of sitting in class in fourth grade as a teacher stood on the raised teaching platform haranguing the entire class for misbehavior or incompetence. I remember thinking at that exact moment that someday I hope to teach, and when I do, I would be the opposite of whatever I was experiencing. Later, I realized that I don’t quite have the stamina to be a full-time K–12 teacher. However, I love teaching and working with grown-ups.

What did you want to be “when you grew up?”
It was either a physicist (both my parents are, so all the dinner stories they told me were about Madame Curie, Albert Einstein, Richard Feynman) or a teacher (both my parents also taught during their exile and after their return).

Why major in computer science?
As a stereotypical Asian immigrant child, I was expected to major in something like computer science. But I loved the humanities. My parents thought that humanities were not for immigrants like me with a limited grasp of language and culture. Their proof was that I got a B freshman year in psychology 101, which tarnished my otherwise all A/A- transcript. But the real reason is probably related to my childhood desire to teach. One thing I learned from computer science is how to debug a complex system that is not working. That’s part of what I do now with child-serving social systems.

You first discovered Mister Rogers’ Neighborhood as an adult?
When one grows up in a country of more than one billion people, and one is taught by family and society that the only way to distinguish yourself from the other billion is to be exceptional, there isn’t much room to accept “being themselves.” That, of course, was Mr. Rogers’ message. He would say that no one can truly learn and grow without being accepted and welcomed for exactly who they are. It was a shock to my system to hear that message, but it certainly has made a huge difference in the kind of parent I strive to be.

He became your role model.
Fred Rogers was one of the greatest communicators on behalf of children and families. He could talk about any thorny issue with almost any audience and help people to see and feel what children and families need. He was my role model to find and communicate what is “deep and simple” in work and life in a world that noisily screams “shallow and complex.”

You kept the name of the program, Simple Interactions, simple.
Yes. We don’t want people to think they have to be experts in order to interact with children well. Also, while we aim for relationships, the only thing we really have control over is how we interact in every moment. And the plural form of “interaction” means that we all develop based not on one Hollywood-style moment, but the patient, incremental accumulation of positive, humanizing interactions.

Finish this sentence: I love what I do because…
… my hope for the world is renewed each time I get to see, film, show, and talk about what helpers do for children and families through simple, everyday human interactions.