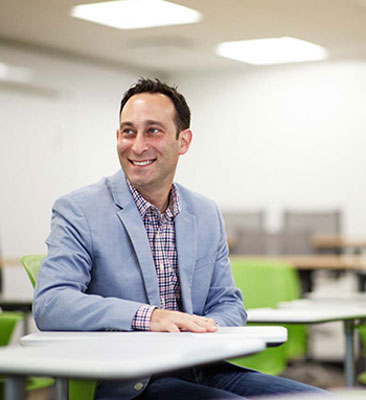 It wasn’t until he was getting his doctorate at the Ed School — after West Point, the Army, classroom teaching, years overseeing technology in schools, and two master’s degrees — that Adam Seldow, Ed.M.’03, Ed.M.’08, Ed.D.’10, realized he really wasn’t engaged in learning unless something totally grabbed his attention.

He wondered, “What’s wrong with me?” But of course, the answer was nothing. As Seldow eventually realized, he just learns in a different way.

“I find something that really piques my interest, and I dig deep.” Looking back, he says, “That was my first foray into personalized learning.”

His latest foray is an initiative to bring personalized learning to the masses as head of education partnerships at Facebook. For the past few years, Facebook has partnered with California-based Summit Public Schools on an online personalized learning platform called plp. Initially, Summit developed its own digital tool to customize instruction at each of its 10 charter schools. During a visit to a school with Summit ceo Diane Tavenner, Facebook founder Mark Zuckerberg was impressed and asked to meet the engineering team behind the customized tool. Tavenner’s response was, I’ll introduce you to him. Zuckerberg was shocked that the team consisted of one person and said he wanted to help. And one way to do that was to provide Summit with something Facebook already had: good engineers.

The revamped PLP tool, which was created with much input from teachers, was initially piloted just in Summit schools. Last year it was offered to 19 other public schools around the country as part of something called Summit Basecamp. This past summer, for the first time, the tool was made available to any teacher who wanted to use it, free of charge. Geared toward middle school and high school students, plp lets students customize and take more ownership of their learning while teachers act as instructional coaches and mentors.

What’s unique, Seldow says, is that the tool first asks students to create an individual plan and set personal goals. A short-term goal might be to read for 60 minutes each day. A long-term goal could be to attend a certain college.

“It’s designed to show students, even as young as middle school, that your actions now are going to impact your future,” Seldow says. “It’s very much about backwards planning.”

As students continue to use the tool throughout the year, they can track how their work, all project- based, is contributing to their goals. Based on that feedback, they can tweak and fine-tune what they’re learning and progress at their own pace. In some ways, Seldow says, it’s a complete change in culture: Teachers don’t lecture in front of the classroom, test students, and then move on to new material. Instead, they work individually with students.

“The tool is built for the pioneering teacher who has ideas but hasn’t found a path forward,” Seldow says.

Using student performance data that is generated by the tool, teachers can view how each student in a class is progressing and then provide targeted one-on-one feedback. At the beginning of a project, a teacher can even see what a student has planned and then give out-of-the-gate input, rather than just waiting for a finished project to be submitted. Asked how Facebook will know if the PLP initiative is successful, Seldow says they’ll know if the culture in a school changes.

“We’ll know if the students are able to learn the way they want to,” he says. “And I think we’ll find it successful when we are able to bring personalized learning to any school that wants to do it.”

Listen to an EdCast with Seldow talking more about personalized learning.