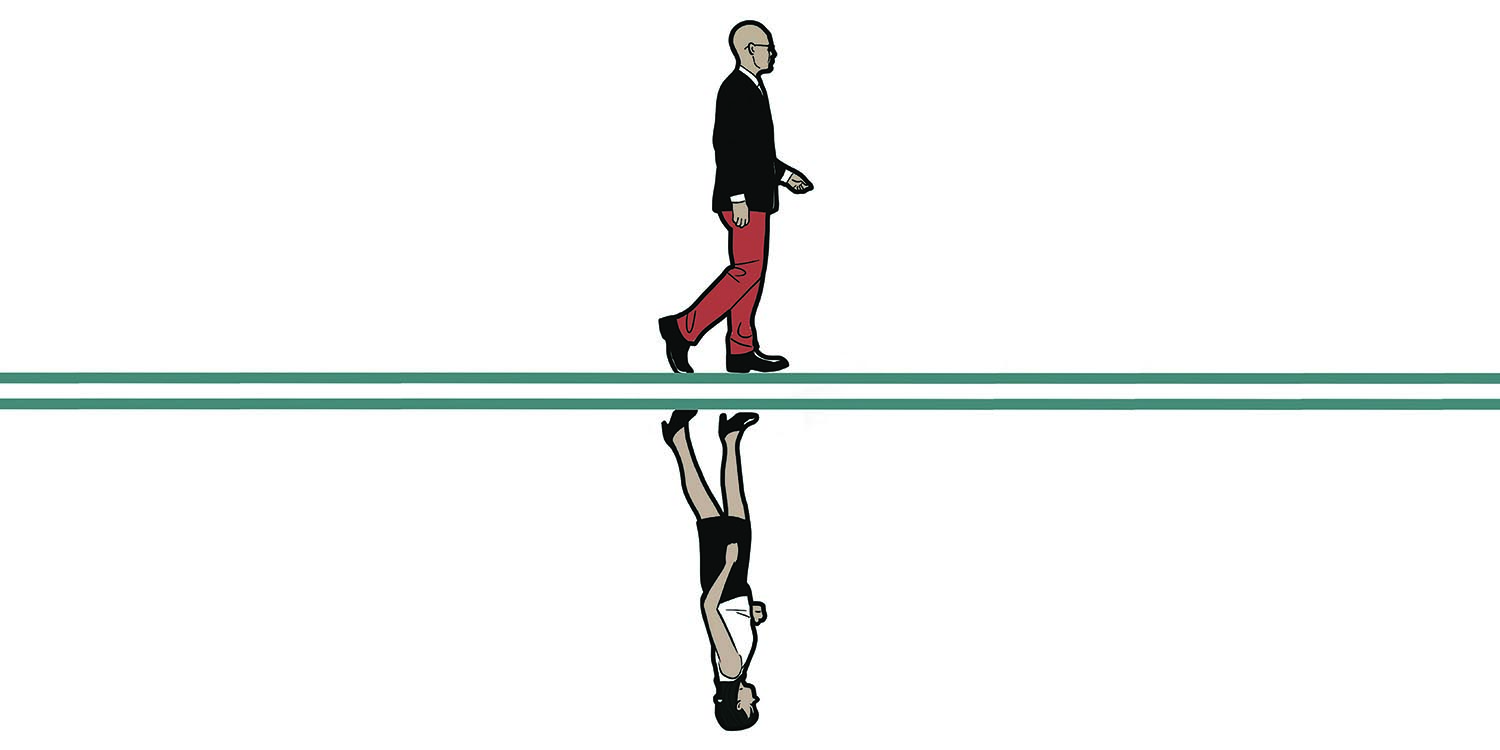 Last summer — that giddy time when vaccines were new and we thought the pandemic might be all over soon — I stood in my kitchen, phone in hand, and shouted so loud it scared some of the dinner guests gathered in the backyard. “It’s Jason Wingard!” I called to my husband. “He’s going to be president of Temple University!”

As vegetables sizzled on the stove, my mind flew back to another sunny afternoon. Harvard Square, 1996, the day before fall classes started. 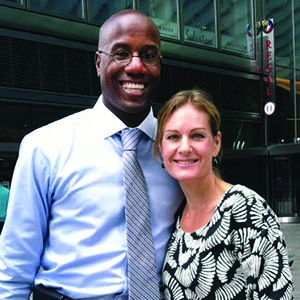 Peruvian buskers playing bamboo flutes, drums, a charango. Punks, professors, and political activists milling around — or steering clear of — The Pit. Students gathering at the Square’s institutions: bagels at Bruegger’s, gin and tonics at Grendel’s, falafel and folk music at Club Passim. And then there was me, an overawed 22-year-old, speed-walking toward the Ed School’s Office of Career Services.

I slipped into the fluorescent-lit room to find that another student — a tall, skinny, serious-looking guy about my age with ovalshaped glasses and an oversized rugby shirt — had beaten me to the notebooks of internship listings. I rested my fingers on one he’d discarded while eyeing the one he hadn’t yet touched. “Getting a head start, too?”

He looked up, face stern but not unfriendly. “It’s something I learned from John Chaney.” He misread my surprise for confusion. “Temple’s basketball coach. He taught camps and clinics for local kids. I went every year.”

“Yeah, I know who John Chaney is — ” I began cautiously.

“Chaney preached preparation,” he said fiercely. “He taught us discipline and ethics. He modeled professionalism and excellence. You prepare today, with dedicated focus, so you’re positioned to win tomorrow.”

Wow, I thought. Very serious. Somewhat mischievously, but with a straight face, I said, “Sorry about ’88.” That was the year Duke and my own childhood idol, Greg Koubek, had knocked Temple out of the final four.

The young man stood up — and up and up, all 6'4" of him, was my guess, based on the guys I’d rowed with at Cornell — and gave me an unexpected grin, its size rivaled only by its warmth. “I’m Jason,” he said. “Coffee?”

As we walked down Mt. Auburn, Jason Wingard from Philadelphia and I compared notes with increasing delight. All the coincidences! He had also been a D1 athlete: Stanford for football and track. Our upbringings rhymed, too, with parents who worked in education and human resources. So maybe it’s no wonder we both ended up with an inclination to serve and a determination to create an egalitarian educational landscape — me through developing children’s edutainment and Jason by using educational technology to close the digital divide.

I left him that first afternoon sensing we were both sincere, compassionate idealists who wanted equality. But while I was still working out the details, he had already identified specific methods like access, affordability, and leveling the playing field.

I would soon understand how rare a talent Jason was, because, without planning it, we shared most of our classes and ended up doing most of our projects together. I quickly found he was a visionary thinker and pragmatic leader with more focus and determination than I’d ever encountered. Our unconventional ideas made us stand out from our older, more experienced cohort. Once we designed a potential talk show for teen girls — Sassy magazine-meets-The Oprah Winfrey Show-meets-Boys Town — that supported authentic dialogue and, ultimately, empowerment. Man, did we get pushback: Too edgy. Too feminist. Too altruistic. Way too uneconomical.

But we didn’t mind. Challenging the status quo built our confidence, and we always had each other’s backs.

Outside of school, Jason and I rarely saw each other. I worked three jobs at The Greenhouse, Gutman Library, and John Harvard’s Brewery. Jason was busy producing short urban documentaries about issues like racism and poverty. He was also trading tips with a pair of equally bold up-andcoming talents: Matt Damon and Ben Affleck, who were in Cambridge filming Good Will Hunting.

By the following spring, soon after the infamous April Fool’s Day blizzard dumped three feet of snow in 48 hours, the ground had thawed and so had some of our wide-eyed naivety. Jason and I shared day-old muffins at 1369 Coffee House and talked next steps. I’d decided against the Peace Corps, and I would be joining Price Waterhouse’s entertainment, media, and communications consulting practice in New York. They had a few educational media clients; I had a ton of student loans. Jason had hit pause on his doctoral plans and was headed to California to manage Silicon Graphics’ global education. The way his brown eyes brightened at the edges, his assured tone — I could tell how confident he felt in the decision. It would take me much longer to have that kind of unshakeable belief in myself.

Skip ahead to 2014, when I visited New York for the first time since 9-11. I caught up with now Dr. Wingard (Ph.D. from University of Pennsylvania) over lunch near the World Trade Center Memorial. His glasses were smaller, and his rugby shirt had been replaced by a fancy suit, but he still looked as serious as ever and his warmhearted smile hadn’t changed. The ease with which we fell right back into vulnerable conversation … it felt like being wrapped in a hug.

We quizzed each other as old friends do. After a career at several startups and nonprofits, plus Wharton and Stanford, Jason was now Goldman Sachs’ chief learning officer. And he lit up when he told me how he’d reconnected with his old Temple basketball mentor at Walnut Lane Golf Club, where Coach Chaney used to “hold court,” telling stories and offering him advice.

Strangely, our lives had remained somewhat in parallel over those 17 years: we had both taught college, written books, and run leadership companies with our spouses. His father and my mother had pursued doctorates at Temple before completing their degrees elsewhere. We had nine children between us.

Six years later, in March 2020, we met again at the Fitler Club in Philadelphia. We’d both been drawn back to our Harvard ideals. I was writing children’s books and, nearing the end of his tenure as dean of Columbia University’s School of Professional Studies, Jason was starting a venture capital edtech fund for companies disrupting the educational industry.

And only a year later, I got The Text and was shouting with joy from my kitchen. Temple University had meant so much to Jason over the years. Who could have guessed that childhood connection would one day come to this astonishing fruition in such a historic fashion?

When I met him, Jason was a daring visionary who got things done, and that hasn’t changed. To open the doors of his school — his school! — to anyone who wants higher education, he’s adopting a holistic admissions evaluation, working to make tuition affordable and planning a bold fundraising campaign that will benefit a more diverse group of prospective students. To ensure Temple graduates are prepared for good jobs, he’s pushing the curriculum toward skills like data science, logistics management, and digital arts. And he’s investing in research and grant opportunities that will allow the university and its faculty to advance fields of inquiry across disciplines. To amplify Temple’s engagement with Philadelphia, he’s deepening ties with North Philly’s impoverished residential population as well as the city’s corporate communities, civic leaders, and athletics fans, plus half a million alumni and donors worldwide.

Given Temple’s size (almost 38,000 students), and its mission of access and inclusion, Jason believes the university can become a pioneer in higher ed — the leader in preparing the workforce of the future. The presidential role is an ambitious undertaking, but he’s prepared. Coach Chaney was right: “You prepare today, with dedicated focus, so you’re positioned to win tomorrow.”

Jean Ramsden, Ed.M.’97, has more than 25 years of experience as a communication specialist, project manager, and producer in the entertainment and education industries