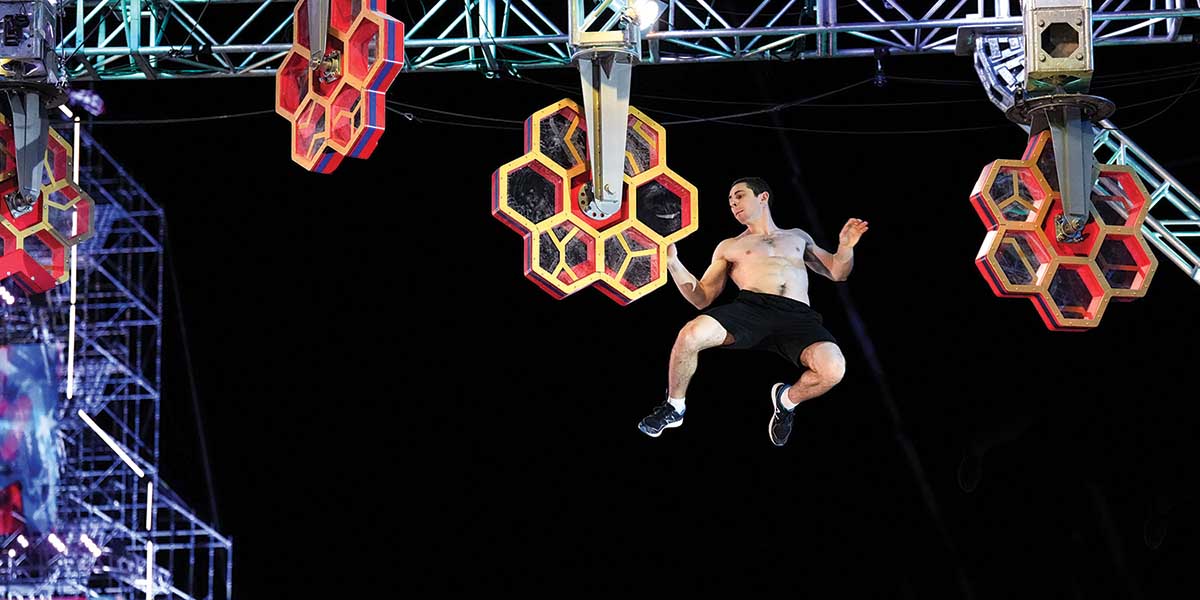 As a kid, growing up in Sunnyvale, California, Josh Levin, Ed.M.'22, couldn’t stop climbing — on everything.

“I was climbing trees, door frames, tables, lampposts — you name it,” he says. “Fortunately, my family decided to try to find a constructive outlet for this energy and signed me up for climbing classes at a local climbing gym in California.”

Interestingly, his education played a part in turning this outlet into his passion.

“My mom homeschooled my brother and me through middle school, which put a huge emphasis on agency over my own education,” he says. “Being homeschooled also allowed an enormous amount of flexibility with the schedule for training and traveling for climbing.”

Little did his family know, though, that this passion would lead Levin to competing in national bouldering challenges, at World Cup competitions around the world, and — while a student here at the Ed School — on American Ninja Warrior, the hit NBC obstacle course show where this past year, he became one of only nine competitors during the show’s 14 seasons to make it to stage four.

And while Levin wasn’t the “last ninja standing” in season 14, he went further than he had in his three previous attempts on the show: He made it to the finals all four times, but this was the first time he advanced to that fourth stage.

“That’s what Ninja Warrior is really about,” he said in a recent interview with his hometown paper. “It’s not about beating somebody else, you know, trying to be the best. It’s about achieving mastery. And what I mean by that is making sure you’re doing your absolute best. You’re competing for the best intentions, you’re competing alongside others, cheering each other on.”

This idea of competing alongside, not against others is partly what got him interested as a teenager in trying out for the NBC show.

“I saw videos of Sasuke, the original Japanese show, which American Ninja Warrior is based off, on YouTube when I was about 15,” he says. “The obstacles looked incredible; it seemed to be the perfect athletic intersection of climbing, parkour, and gymnastics. I was also inspired by the competition format, in which it was explicitly the competitors versus the course, not each other. When they launched the American version of the show later the same year, I was super excited to try it out until I found out you needed, at the time, to be 21 to apply. I ended up having a pretty bad shoulder injury and surgery when I was 21, waited until I was 22, then applied and competed on American Ninja Warrior for the first time in 2016.”

This past year, the show dropped the age requirement to 15 and Levin, by then in his late 20s, found himself training with (and eventually competing against) teenagers. The age change helped him shake up how he got ready for the competition, he says.

“I traveled to Connecticut and Colorado to train with some of the current prodigies of the sport,” he says, “as well as some older competitors who have had success in more recent seasons.”

He also shook things up this this season when he decided he had to take more risks and not always play it safe if he was going to get further along in the competition — something that he feels held him back in his previous three attempts.

“It’s not about beating somebody else, you know, trying to be the best. It’s about achieving mastery. And what I mean by that is making sure you’re doing your absolute best.”

“I’m generally a risk-averse competitor, and this year I decided to take some big risks in the hopes that it would pay off in the final rounds in Las Vegas,” he says.

“My goal is to complete the most difficult climbs I can in two different climbing disciplines: bouldering and lead climbing,” he says, meaning the kind of climbing that involves short distance and the type that involves long distance, both using safety equipment. “The main objective for me is to climb V15 and 5.15” — two grades of difficulty, both strenuous and only for expert climbers — “which for me feel within the realm of possibility.”

As for his non-climbing career, Levin is back in the classroom, teaching engineering at the Synapse School in Menlo Park, California. Prior to Harvard, he worked at Synapse as a STEAM consultant and as an athlete mentor for a nonprofit called Classroom Champions. It’s these experiences, he says, that made him want to come to the Ed School.

“I wanted to expand my understanding of education,” he says. “Before HGSE, I’d had many informal experiences teaching at a variety of levels, but never had formal training in how to structure my approach to teaching and learning. hgse is the preeminent institution for education, and the new LDIT Program fit my interests and passions perfectly.”

The program also allowed him to fit in the strenuous training he needed to be doing during this season of American Ninja Warrior.

“I ended up having a pretty light spring semester,” he says, having loaded up on classes over the summer and during the fall and J-terms, “which allowed me a ton of extra time to train for the show. There are also a couple MIT undergrads, Guang Cui and Daniel Sun, who have competed on the show the past couple years, and I decided to reach out to them to see if they were interested in training together. They ended up being incredible training partners and we helped push each other to have our best seasons yet.”

His Ed School classmates and professors were also supportive.

“A bunch of them had a virtual sideline watch party for my qualifying episode in March,” he says. “Then a separate group of Harvard climbing friends actually made the trip out to Vegas to cheer me on in person right before graduation in May.”

Asked what kind of advice he has for his students that he can take from his recent experience competing on American Ninja Warrior, Levin circles back to the advice he gave himself about taking risks.

“Sometimes in life, you need to step outside your comfort zone and take risks if you want to break through barriers,” he says. And most of all? “Go for it!”