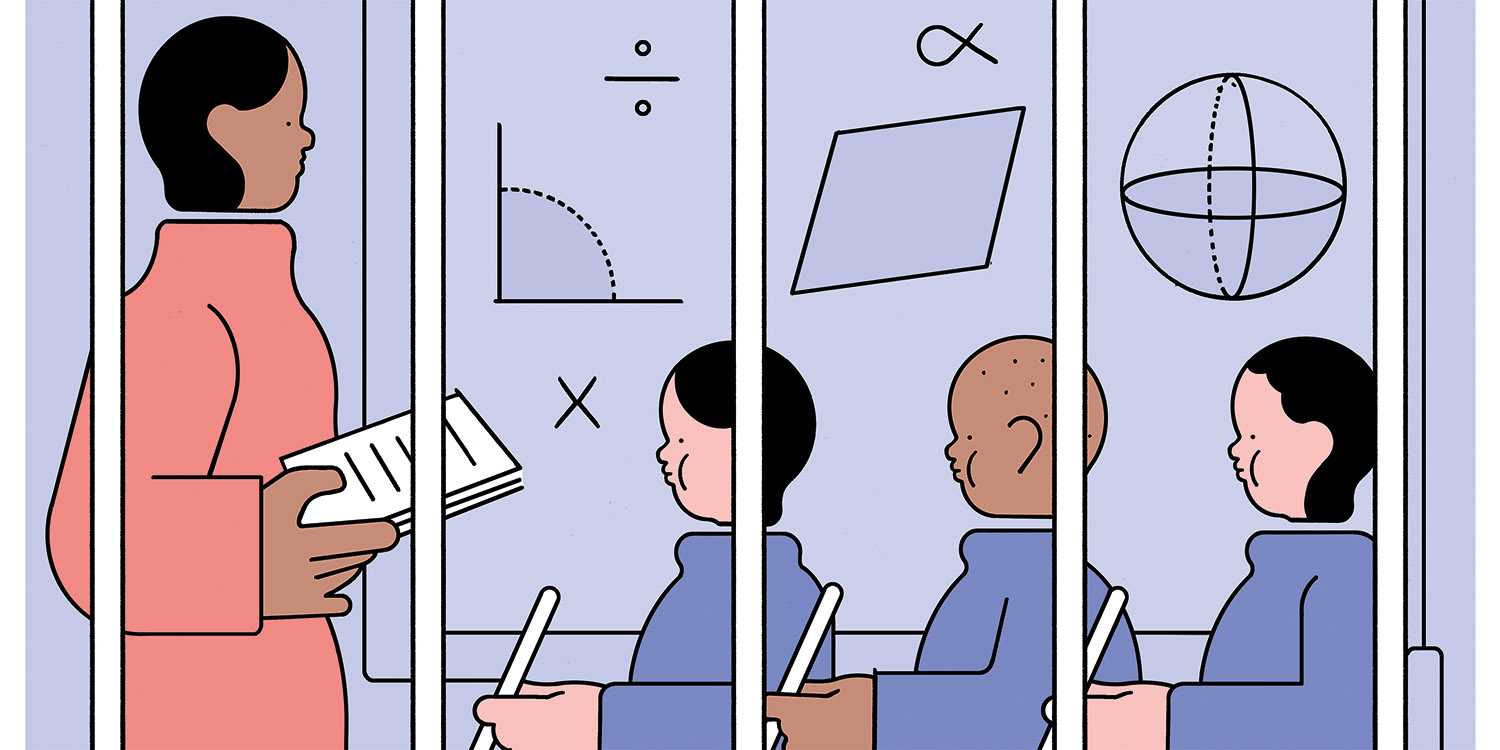 Forty-five years after receiving my Ed.M. from the Ed School, I became a volunteer teaching assistant.

Okay, that’s a little misleading. When I signed on as a teaching assistant with the Emerson Prison Initiative in the fall of 2018, I had 48 years of teaching experience. I’d taught high school English for a couple of years before coming to HGSE. I’d worked with elementary school children through the Education Collaborative. I’d worked with veterans coming back to school at night at a couple of junior colleges. I was on the faculty at Curry College from the late ’70s until just a few years before I began working with incarcerated men as a teaching assistant. But when I walked through the series of locked doors and mechanical gates to get to the education building at the Massachusetts Correctional Institution at Concord for the first time, I felt like a rookie.

The Emerson Prison Initiative provides a small number of incarcerated men with the opportunity to pursue a bachelor’s degree. My role was to help run study halls that would support the classes in which the men were enrolled. In my first semester at Concord, those men were taking a public speaking class. They practiced their speeches and their classmates and I offered suggestions. One of the first men to present his speech had spent eight years in a maximum-security prison before being transferred to Concord, which is a medium-security facility. His topic had to do with nutrition and the food in the prison. He argued that the dinners would be more pleasant if there was chocolate for dessert. When he’d concluded his thoroughly convincing speech, he gave each of his classmates a piece of chocolate. Then he gave me two pieces.

The incarcerated guy’s version of an apple for the teacher.

Teachers learn from their students. I learned right away that my students all had a sense of humor. While they were practicing their speeches and commenting on each others’ efforts, I learned that they were exceptionally supportive of one another. There was a lot of kidding in their comments. There was no cruelty.

I learned that the men with whom I was working could take seriously not only classes on economics, history, and literature, but also classes on acting and the impact of popular culture as represented on TV and in films. During one study hall, we watched an episode of Friday Night Lights, after which we discussed a Marxist interpretation of what we’d seen. They had no trouble understanding the “false consciousness” apparent in a small town where high school football was king.

How do you do participate energetically in that sort of discussion while your preoccupations include anticipation of a meeting with your attorney or sweating out the verdict after a parole hearing? How do you share your views on a TV show while you’re worrying about whether your family will lose their apartment or how soon the most recent pandemic related restrictions will end so your children will be allowed to visit you?

I also learned about some of the things my students were doing to fill the days.

They were training dogs to be companions for people suffering from PTSD, which made sense, since some of them were themselves suff­ering from PTSD. They were speaking to groups of young students, urging them to avoid the mistakes my students had made when they were younger. They were meeting with other incarcerated men to discuss not only the circumstances that had led to the fatally bad decisions they’d made, but also strategies for prison reform. They were embracing personal responsibility and learning about the various manifestations of restorative justice, then practicing what they’d learned in meetings with people who’d been victims of various crimes.

Teachers working with incarcerated men and women are likely to face various challenges and negotiations with regard to language and lots of other matters. For me, the most basic conflict is one I rarely talk about with my students. On the best days at Concord, what I’m doing helps somebody become a stronger, more confident writer. But does providing these men with classes and the opportunity to earn a degree serve to make the fact of incarceration more tolerable? And if it does, is that desirable?

People teaching in a prison learn that their students are just people. This may seem self-evident, but perhaps not. Incarceration separates the incarcerated from everybody else. That’s the point of the system. It’s not difficult for those who’ve never been inside a prison or known somebody who is incarcerated to ignore the people behind the walls, or to assume they must belong where they are, since a prosecutor, a judge, and a jury have decided that’s the case, though many of this nation’s incarcerated citizens have never had a trial. They are incarcerated as a result of desperate plea bargains, or they are locked up while awaiting disposition of their cases because they can’t afford bail. Some of the students with whom I work have committed crimes as serious as crimes can be. Many were first arrested before they reached adulthood and have spent most of their lives incarcerated; 15 or 20 or 25 years later, none of them are the same people they were at 18 or 19 or 20. The system doesn’t acknowledge that.

People driving home from their afternoons volunteering in the prison cannot avoid the painful realization that for their students, “home” is a cramped cell. They may not be able to avoid wondering if they are making a brutal and unresponsive system seem more acceptable by helping a small number of the people imprisoned earn a credential while learning something about history or political science. They are perhaps bound to wonder if they are providing those who would defend the enormous prison complex with cover: “Hey, it’s not so bad. Some of those guys are getting a free college education.”

That’s not an attitude I’ve found among the incarcerated men with whom I’ve worked. When I wondered in class one day if I’d be helping my students more if I was marching around with a sign reading “Tear It Down,” one of them said, “Nah, we know you’re one of us.”

Of course, I’m not. I’m only a witness, and a witness whose experience has been limited to a small number of men in a single prison. But I heard that student, and it helped.

Three years into my experience as perhaps the nation’s oldest teaching assistant in a state prison, I make no pretense to expertise. I’ve worked with the same group of a dozen students since 2018. In order to qualify for admission to the Emerson Prison Initiative, these men had to demonstrate they were more deserving of inclusion than more than 100 other incarcerated men who applied for that opportunity. Are the students with whom I’ve worked representative of the population at MCI-Concord, let alone the more than 2 million men incarcerated across the country? I can’t say. I can say that I’ve come to feel that locking young men up for decades is unusually cruel and counterproductive. I say that as a witness.

On an as-yet-to-be-determined summer day in 2022, the men with whom I’ve been working will be awarded their bachelor’s degrees. I assume there will be a ceremony. I look forward to that day. I hope I will be allowed to attend.

Bill Littlefield, Ed.M.'73, is the former host of NPR’s It’s Only a Game