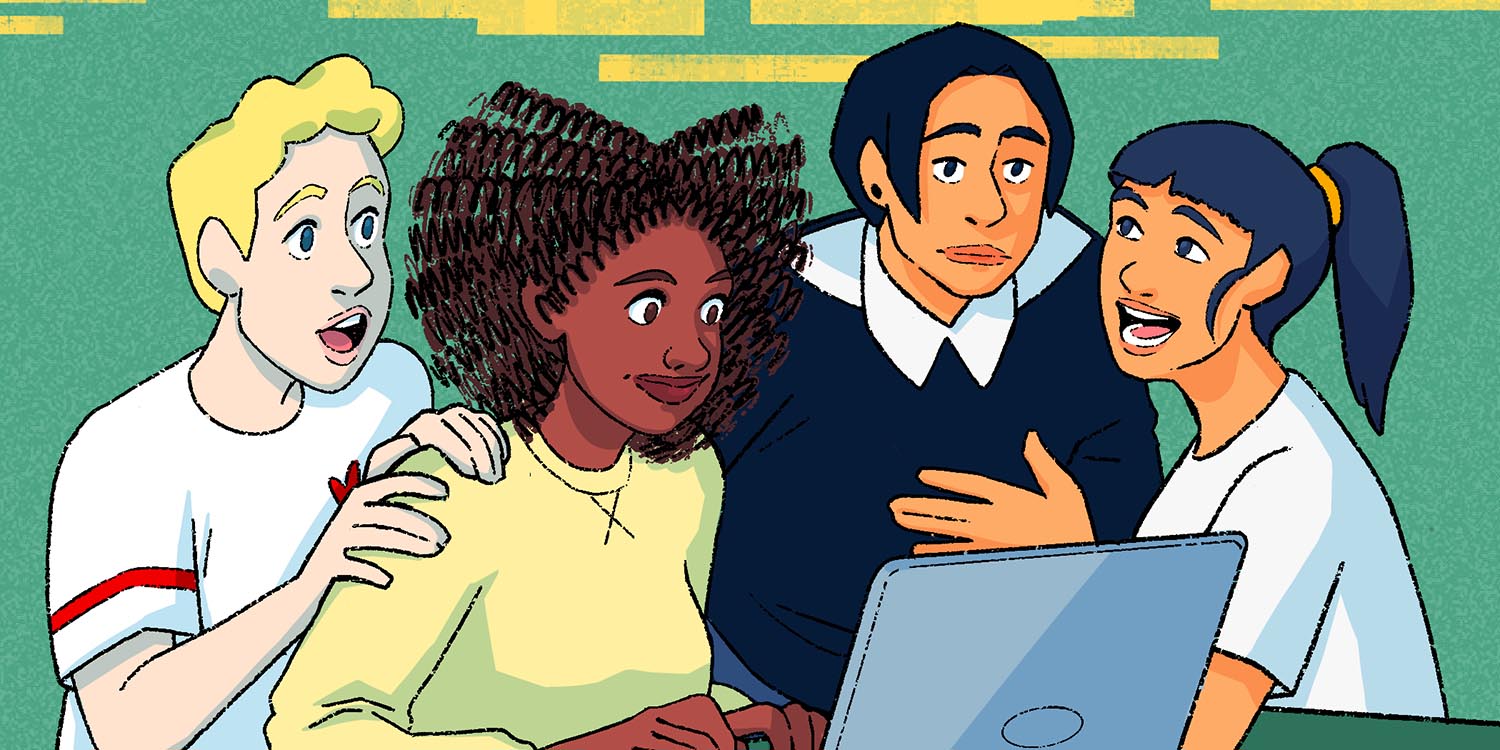 For more than two decades, Jane Margolis, Ed.D.’09, has worked to eradicate the glaring gender and racial inequity in computer science education. Now, after producing two books based on her research, she has taken a dramatic turn by writing a graphic novel aimed directly at underrepresented teenagers.

Power On!, written with UCLA researcher and lead author Jean Ryoo, tells the story of how systematic bias affects the lives of four high school friends from diverse backgrounds. While socializing at a local diner, one friend gasps at a news bulletin on his phone: a white police officer in their town has shot and killed an unarmed black man who was misidentified by face recognition software.

The friends frantically search their phones to learn how such a thing could happen. Within minutes they are sharing articles about algorithm bias, artificial intelligence, and how face recognition software doesn’t always work with people of color. They are shocked to learn that even in 2022, the workforce in the computer professions is just 25 percent women, 3 percent Black women, and 2 percent Latinx women.

“This lies at the heart of what our work is now,” says Margolis, a senior researcher at the UCLA School of Education and Information Studies. “We want to make computer education culturally relevant by connecting it to what’s happening in the world. Computers lie at the heart of the most pressing issues of our day — misinformation, polarization, algorithm bias. This needs to be a part of high school computer science education.”
Margolis says it was Ryoo who insisted that their new book be a graphic novel.

“This is a form of literature that really engages youth,” says Ryoo, who is director of research for UCLA’s Computer Science Equity Project. “It’s fun to read and can introduce them to how tech governs their lives and who is creating that technology.”

But Power On! is not just a kids’ book. It sits on the foundation of 20 years of research combined with hundreds of interviews with high school students in Los Angeles and the Mississippi Delta.

Two Decades in the Making

After earning her master’s degree in 1990, Margolis moved to Pittsburgh, where she was hired by the dean of the computer science department at Carnegie Mellon University to find out why only 7 percent of the students in the department were women.

This led to the publication of her first book, Unlocking the Clubhouse in 2002, and helped Carnegie Mellon increase the percentage of women studying computer science from 7 percent to 42 percent in five years.

In the years that followed, Margolis moved to Los Angeles where she obtained a grant from the National Science Foundation to explore why so few Blacks, Hispanics, and women were enrolled in high school computer classes. Her four-year study led to the publication of her second book, Stuck in the Shallow End in 2008.

Taken together, the two books explore how cultural bias and education policy combine to steer underrepresented groups away from computer science.

“In Unlocking the Clubhouse, we devote an entire chapter to geek mythology,” says Margolis. “Teachers think of people like Bill Gates and Steve Jobs and believe there are certain kids who are born to do this. This attitude is rampant in computer science.”

In contrast, Margolis’ research revealed that the supposed “innate talent” of geeky white boys is largely the product of “preparatory privilege” — they come from affluent families with supportive parents who sent them to computer camp and kept the family computer in the son’s, rather than the daughter’s, room.

“Society has seen the computer as a male-identified object,” says Margolis. “Teachers view computer prodigies as the kind of boys who stay up all night obsessing on their computers. Girls and students of color are repeatedly told that they don’t belong because they don’t dream in code.”

Margolis said that this geek culture also resulted in computer science classes that emphasized hacking for hacking’s sake. This left out students who would be more likely to engage if the focus were on how computer science can influence real-world issues like climate change, mental health, and societal bias.

In addition to the impact of cultural bias, structural issues also prevented many students from excelling in computer science. Some were steered away from the subject by culturally bias tracking, she says, while a huge swath of the population never had a chance to explore the subject because funding for computer science classes has been largely confined to better-funded schools.

“Computer science education provides a window into how inequality is perpetuated,” says Ryoo. “I don’t think programmers set out to create biased algorithms, but these inequalities are reproduced because white and Asian men aren’t asking the right questions. There isn’t enough collaboration with people who think differently and have different cultural values.”

Margolis hopes that discussions prompted by Power On! won’t be limited to computer science departments.

“My dream is to have students write their own chapters for sequels to this book,” she says. “It would make an amazing assignment in an English class.”

The goal of Power On! is to:

— Bill Ibelle is a freelance writer who has worked as a newspaper reporter and executive editor of Northeastern Magazine.