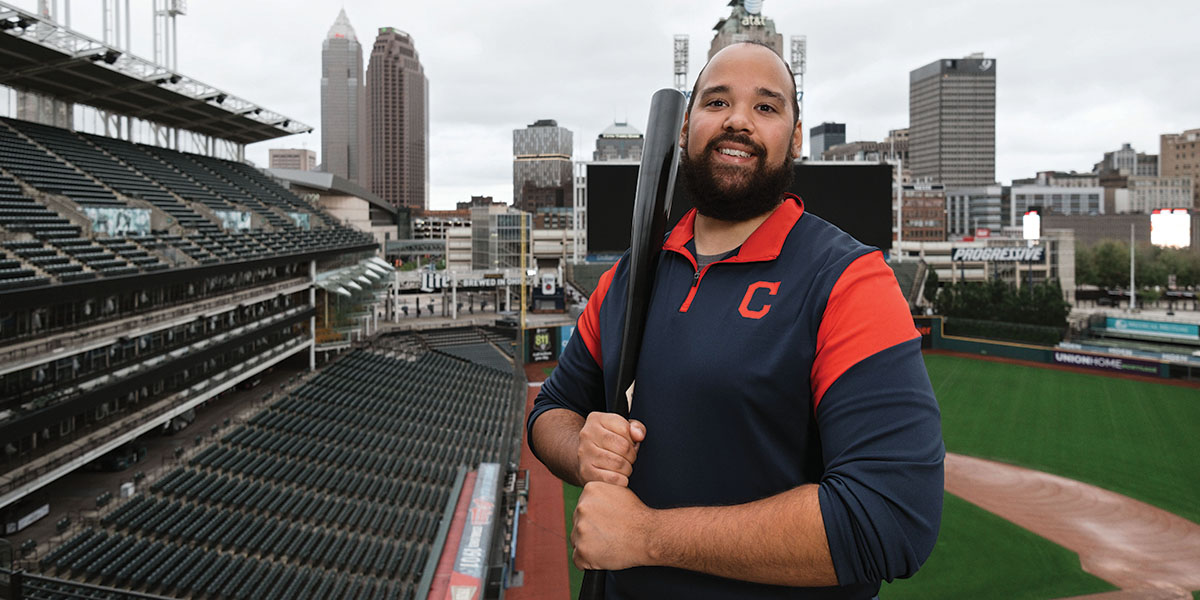 A Swing and a Hit

Matthew Grimes, Ed.M.’21, doesn’t remember a time when he wasn’t playing baseball or watching it on TV. Growing up with a field close to his apartment, and with a dad and brother who loved the game, baseball was just a fact of life. So it’s no surprise that after graduation from the Ed School this past May, Grimes ended up with a job overseeing diversity, equity, and inclusion (DEI) for a Major League team.

And not for just any team — for his longtime favorite team: the Cleveland Indians (recently renamed the Cleveland Guardians). Which is a surprise, given that Grimes is from Troy, New York.

“This is a dream job for me. Growing up, I would pretend to be the players I saw on TV. When I was finally able to play t-ball, in 1997, it happened to be the same year that the best team in the major leagues was the Cleveland Indians,” he says. “They went to the World Series against the Florida Marlins.” His family watched all of the games. “One day, my older brother said he was going to be a Marlins fan, so I said I was going to be an Indians fan.”

Now an Indians employee, Grimes is figuring out how best to help the organization in a role that is not only new to him and to Cleveland, but also to the Major League.

“DEI is a new thing for professional sports, and for baseball, in particular,” he says. “A lot of sports clubs have had to make a decision: Do we want to use our platform for good?” His hope is that in this new role, he can serve as a model.

“Every role I’ve had had been an inaugural role so I’m used to laying down the foundation and seeing where my role goes,” he says. With Cleveland, this includes connecting the business side of the team with the baseball side. “I’m the first employee to work in both sides,” he says. “There’s a huge disconnect between business and baseball.” He’s also involved in ongoing work to increase the number of women in the organization, around the team’s name change, and to expand the team’s traditional fan base.

“We don’t have a Latinx following, yet the west side of Cleveland is predominantly Latinx, so shame on us,” he says. “Baseball, historically, has been a game for white fans. How can we go out with boots on the ground and re-engage?”

Grimes credits the Ed School for helping him get to where he is.

“The Ed School opened my eye to possibility,” he says. “It also gave me the confidence to say about this job, ‘If not me, who?’”