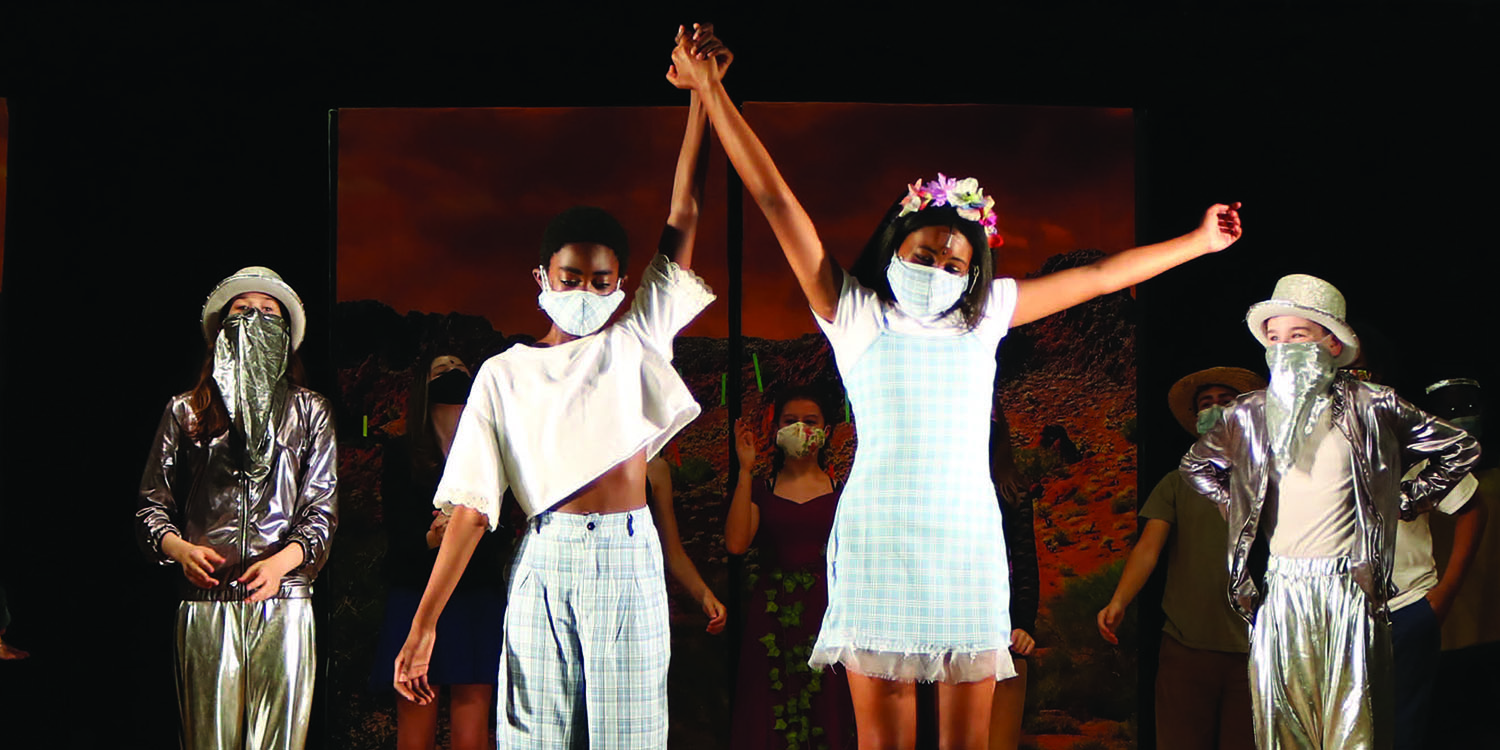 Atlas’ Afrofuturistic production of "The Wiz"

Despite COVID, two alums knew the play was the thing

When the pandemic shuttered schools around the country last spring and moved learning online, extracurriculars like band and drama were usually canceled or put on hold. For Atlas Middle School in New Haven, Connecticut, that wasn’t an option. As a theater-based school, Atlas had to figure out how the show — literally — could go on.

As luck would have it, being nearly brand new (the school had opened just six months earlier) had its advantages.

“We were lucky to still be in design mode,” says co-founder Maria Giarrizzo-Bartz, Ed.M.'14. “We were able to look at the situation and respond quickly.”

For example, they had just finished the first week of work on a production of A Midsummer Night’s Dream. Students had been cast in their roles, and everyone was working in their design departments, coming up with ideas for props and costumes. Like the rest of the world, they didn’t know how long remote would last, but, says Giarrizzo-Bartz, since the school’s approach is to use the theatrical process as the “engine” for learning other subjects, they had to keep looking forward. That meant moving rehearsals online, with student stage managers iMessaging castmates when it was time to rehearse a scene. As the pandemic progressed, they embraced the idea that the show would need to be fully filmed on Zoom, rather than performed on the stage of their partner, Long Wharf Theatre, as planned. The students, she says, rose to the challenge.

“The set design team created digital backgrounds. The costume team ordered things to be delivered to people’s houses, or dropped them off in plastic bags on porches,” she says. “The props team made or ordered multiples of the same prop for filming in multiple houses.” They had students hang green screens on walls in their homes, and mounted their devices on homemade pvc pipe tripods. Once filming started, actors had unique challenges, like figuring out how to “face” one another on screen or create the appearance of handing props back and forth.

Beyond rethinking ways to put on a show, the pandemic also allowed the new school the unique opportunity to step back and discuss what else needed reinventing.

“When you create a school, you have a vision of the type of community you’d like to create. Along the way, your stakeholders can push you to make compromises to your vision,” says co-founder Caroline Golschneider, Ed.M.'14. “Sometimes these compromises are needed and welcome — we want to be responsive to our community! However, some of these compromises resulted in accommodating a more traditional educational model than what we had envisioned. The pandemic, and the Black Lives Matter protests that occurred in the summer of 2020, allowed us to step back and say ‘Hey! Let’s recommit to our vision of what school can be.’” That meant human-centered, flexible learning that de-emphasized traditional testing.

The pandemic also reaffirmed what they already knew: that social-emotional learning is core and relationships matter in schools. “Being online with students in their homes brought more fully into focus the complex human identities and experiences of our company,” Golschneider says. “We were all literally in one another’s homes, with cats on screens and kids in laps, and siblings crying in the background, experiencing a global trauma together, and processing that together. This made us recognize a need to slow down, to prioritize relationships over any punitive systems, and respond to the kids who were struggling with even more specific and tailored supports such as delivering paper packets of work to their houses when they struggled to stay engaged online or adjusting the school day to start later in the morning.”

These are all things, they agreed, that should continue at the school beyond the pandemic. “These are all values that make our school better no matter the circumstances,” Golschneider says.

They also worked on equity issues, starting with Wi-Fi access and accessibility, and encouraging students to ask deeper questions about the shows they were doing.

“This was true for The Wiz during COVID,” says Giarrizzo-Bartz, referring to the musical they performed live in the spring of 2021 fully masked (masks designed by students) and the audience seated outside. “All of our anti-bias, anti-racist work was tested. There were questions about how we were approaching The Wiz, questions around appropriation versus appreciation, and how can we honor the history of The Wiz as white directors?”

Golschneider says students had collegelevel conversations about these questions.

“They talked about their identities, about playing a certain character as a white person,” she says. “We talked about anti-racism and how it directly applied to our production. We didn’t always agree, but to hear one another’s viewpoint was important.”

This is exactly what the two were hoping for when they were Ed School students living together after meeting on a roommate housing board and commuting every weekend back and forth to New Haven, where their husbands both worked.

“During the car rides that fall, we dove into our philosophy about education, our experience as teachers, what we wanted to do,” says Giarrizzo-Bartz, who previously ran the drama program at the East Harlem School and came to Harvard to figure out if she could start her own children’s theater company. Golschneider had been a music teacher in the Windsor Locks, Connecticut, school district.

“I really wanted to stay in the public school realm, but there’s not always a lot of room for experimentation,” says Golschneider. “I knew that in order to do what we wanted to do, we needed to start a school.”

Linda Nathan’s Designing a Democratic School class at the Ed School made a huge difference, allowing them to dive into different aspects of building a school, from governance to philosophy to planning.

“That’s where I got all of the feedback and we came out with a prospectus,” Giarrizzo-Bartz says. Luckily, an established nonprofit in New Haven, the Neighborhood Music School, once a settlement house for immigrants, was looking for a way to utilize their facility during the day before their own afterschool and evening activities started. When Giarrizzo-Bartz heard this, she says, “I leapt out of my seat.”

This fall, the school opened fully and in person, with remote learning available to students in quarantine. They are remaining intentionally small, both for their philosophy (“The small size cements the community and that’s important,” says Golschneider) and for ease during the continuing pandemic, with six to 10 students in each grade, plus two students back for a “fellowship year” to repeat some eighth-grade work and start a ninthgrade curriculum.

And then there’s the theater.

“For the fall show, we are doing the companion piece to our inaugural production of The Giver. It’s called Gathering Blue by Lois Lowry and explores the role of creativity and art in the preservation of culture and history,” says Giarrizzo-Bartz. “We’ll revisit many of the same themes from the curriculum we devised to accompany the The Giver, like neuroscience of memory, cultural memory, and global studies, and additional tie-ins to ableism, genetics, and biomedical engineering. As of now, the plan is a live, masked performance for families in our large performance space. Fingers crossed!”