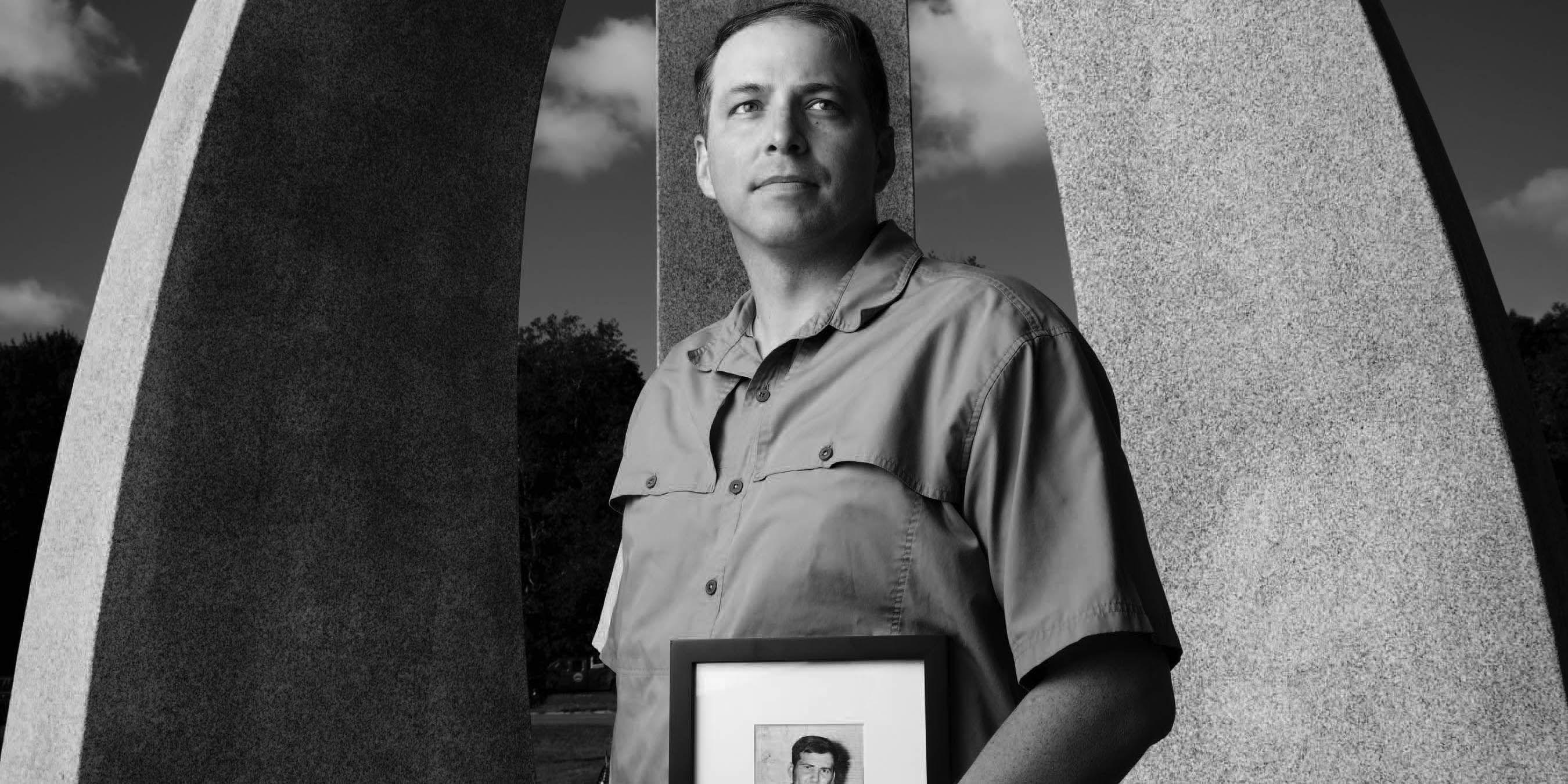 Matt Tallon with a photo of his dad, at the Dorchester Vietnam Veterans Memorial

What I learned writing a book with my father

Growing up, Matt Tallon, Ed.M.’09, administrative director of faculty support services at the Ed School, had seen the burn scars and the skin grafts covering his father’s body. He remembers the times his dad’s back acted up. What he didn’t fully understand was that the wounds — the ones he saw and the ones his dad carried inside — were from the night in 1972 when his dad’s Mohawk plane was shot down at the tail end of the Vietnam War. His father survived, but his copilot didn’t, and he rarely talked about those days. So Tallon was surprised when his dad came to him in 2009 with a stack of yellow notepads filled with his handwritten memories — memories that the two of them turned into a new memoir called 100 Days in Vietnam. Here’s what he learned.

My father, Lt. Col. Joseph Tallon, didn’t share these stories. It was better for him to put it away, not talk about it much. I got bits and pieces here and there so I knew something had happened to him, but I didn’t know the details. I had to probe. Then my dad came to me with the yellow legal pads and I had to interview him. We typed up the notes.

He was motivated to start sharing by his former high school students in South Carolina. My father was one of those social studies teachers that wove into his lessons so many personal stories and narratives that the students told him he must spend time telling his life stories in retirement.

My father flew a spy plane, a surveillance plane. It took pictures. Now they use drones. He was a military intelligence officer.

His plane was shot down around 1 in the morning. They were at a low speed and a low altitude, so it was already dangerous. Both were ejected from the crash. They hit the ground pretty hard. The man sitting next to him, whose job was to run the surveillance equipment, didn’t survive.

My dad only knew this guy, specialist Daniel Richards, for three hours. He had been stationed on another base in Thailand, but they happened to be flying a mission together that night. It was their first flight together. My dad was 25. The other soldier was 23.

In regard to the accident itself, I learned the depths of the survivor’s guilt that he still feels to this day. I knew he was emotional about losing his observer, but it took the detailed work we did recounting that accident from all angles for the book to get a sense of his true guilt that he wasn’t able to get the aircraft safely back on the runway even with the disabled engine.

He thought it was his turn to serve. He was trying to make something matter. You want to think your service matters. One of the themes of this book is, how do you make sacrifice matter?

Basically all that was left in Vietnam in 1972 were guys like my dad. The Americans were scaling back their presence. Nixon was running for reelection and following his 1968 pledge to end the war if elected, he’s desperately trying to find a way out.

It was a really terrible time to be there. There was never a good time, of course.

When we first started working together, I didn’t know if the book would be in his voice or my voice. It ended up being in both. The guts of the book, parts one and two, really center on my dad’s time in Vietnam, and we put current events in there, but another thread, what makes the book unique, is my dad was newly married when he went to Vietnam. This was a year later. You can see in reading the letters, he’s clearly missing my mother. He wrote to her nearly every day. It’s truly a love story.

I learned that my mom had the letters buried in the attic. She brought them out halfway into the writing process. After that, we totally rewrote the book. It allowed us to create the narrative like a journal. As a reader, you’re experiencing this as he was experiencing it, as a 25-year-old instead of as a 74-year-old. It’s not just looking back, as many memoirs are written.

Because we found cassette recordings and handwritten letters, my father couldn’t hide from his 25-year-old self during this project. For me, it was a revelation. I too had been an Army lieutenant at age 25 and also newly married and serving overseas some 30 years after my father’s experiences in Vietnam.

When we first started the writing, I started taking classes at Harvard Extension School on memoir and creative nonfiction, at night, after work. I really pushed myself in drafting this memoir. You also see how having two history teachers for parents had an influence in how we structure the book.

There were certainly myriad challenges with this project over the 12 years it took to get to this final published product, and many times I wondered if it would ever get finished in the high-quality manner we so desired it to be. I often joke that this book was written and rewritten between 11 p.m. and 3 a.m. many times over, and sadly that’s probably true.

What I really learned writing a book with my dad is that I’m a lot like him and I’m very different from him all at the same time.