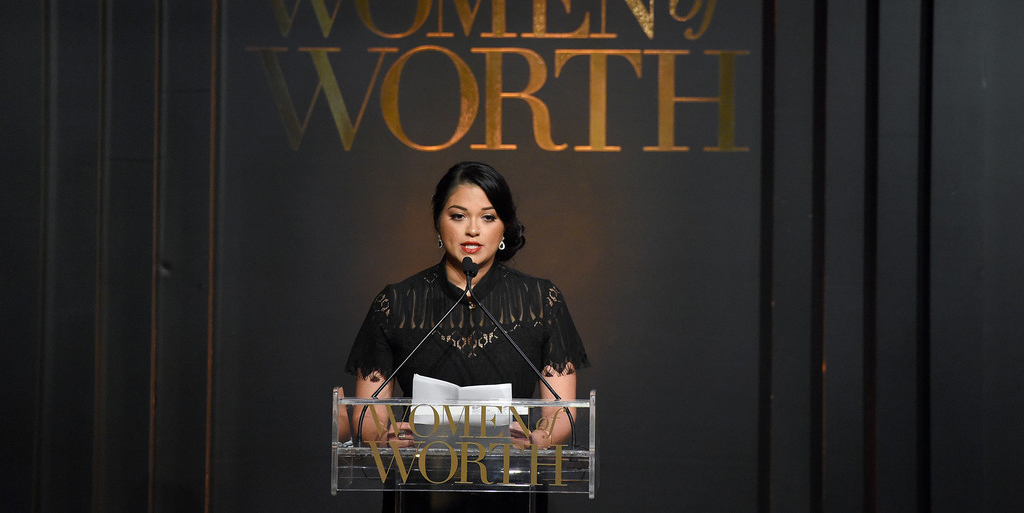 Last December, Hetal Jani, Ed.M.’12, was standing on a stage in New York City, ready to receive a “Women of Worth” award from L’Oreal. It was a surreal moment for her. Not only was she being honored, but the person about to hand her the award was a famous Oscar-winning actress: Helen Mirren.

It was also a telling moment. Just as Jani was discussing the work she was doing to support immigrant girls through SPEAK Mentorship, the nonprofit she started in 2015, she herself was feeling supported by Mirren and L’Oreal’s president, who spoke at length with her at the event.

“Helen made me feel seen, and she really listened to what I do at SPEAK,” Jani says. The three of them “had a long conversation about what needs to be done to make sure the potential of girls doesn’t get stopped short.” That kind of support, she says, is important. “Sometimes the difference between a successful entrepreneur and one that gives up is the people who believe in them and have the power to just share their journey and spread awareness of their mission.”

Jani’s mission started when she was in high school tutoring other students, including Laura (name changed), a high academic achiever at the top of her class. When Laura was 12, she got her first 80 on a test and her father wasn’t at all happy.

“Because of his disappointment, he threatened to send Laura to Guyana to get married,” Jani says. The next day, Laura and her mother visited Jani. The mother, upset, felt she had not been a strong role model for her daughter; Laura worried about being perfect. The mother thought that Jani, with her East Indian roots, would understand. “It stayed with me that if the mothers couldn’t be strong role models for their daughters, maybe other women could,” Jani says, “and maybe it was true that I could understand and guide Laura and her family simply because our cultures were similar and I had overcome similar situational barriers.”

The idea for SPEAK Mentorship was formed. Working with schools with large immigrant populations in three cities, the nonprofit now pairs high school girls (and more recently, boys) with three adult mentors each, including one who is culturally similar. Mentors offer support around college and career goals, as well as culture.

“Girls like Laura and others have so much incredible potential that never gets met because they’re constantly facing these conflicts as a result of straddling two cultures and questioning their own worth,” Jani says. “What are we losing as a society when the little girl who wants to be a CEO, a doctor, or an artist doesn’t get encouraged to pur-sue a career because the cultures that their families come from still have extremely gendered expectations for their daughters? I want them to take the dreams and goals they have and have the people in their lives help them figure out how to get there while still acknowledging their own unique perspectives being from diverse cultural backgrounds.”

Most of SPEAK’s mentoring is done virtually at school, and now at home while school’s are closed (27 sessions in total), allowing for more flexibility and buy-in from parents.

“Parents put a lot of trust in the schools, especially parents from certain communities,” Jani says. “If the school is providing the program and the girls don’t have to incur any additional cost of money or time, we found the sessions are more likely to occur.”

Jani says she didn’t have these kinds of opportunities growing up but wished she had.

“Having one woman who could understand my bicultural experiences, my career interests, and my strengths would definitely have set me up for success much earlier in life,” she says. “I had to make a lot of mistakes and U-turns and prove myself, even to myself, because I didn’t really know what I wanted, let alone how to pursue it. I’ve realized how important social capital is to get ahead in life, and a lot of what I’ve accomplished has been because of who I know and how they’ve helped me along the way.”