The Story of the Unlikely Children's Book Author 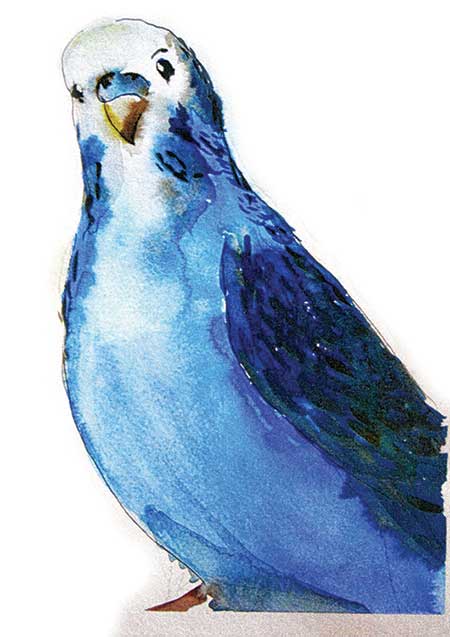 Once upon a time there was a professor. His name was Fernando Reimers. Professor Reimers lived in Cambridge, Massachusetts. He taught at the Harvard Graduate School of Education. He spent his days working with students and writing many books for adults.

But at home, Professor Reimers had an idea. He wanted to write a book for children. He decided the book would be about a very special friend of his named Filomena.

Reimers, Ed.M.’84, Ed.D.’88, has spent a career focused on innovative global education policies and programs as a professor at the Ed School and director of the International Education Policy Program. He’s also a prolific writer and editor, producing more than 20 books, plus scores of journal articles, on the importance of developing 21st-century skills in students.

So it came as a surprise when Reimers’ latest writing wasn’t on global education, or for adults, but a personal story about his 12-year-old parakeet.

“I can’t explain why I did it,” Reimers says on what drove him to write a picture book. “I remember sitting at my kitchen table with 60 papers to grade early in January and wondering how the bird saw the world. I began to write this story from the bird’s point of view. This simple act made me very happy.”

From that initial question emerged The Story of Filomena. It’s the first in a trilogy featuring an observant blue parakeet that joined the Reimers household as a pet for his two young sons.

In the book, as in real life, the boys have grown up and left the figurative nest, leaving Filomena behind with Reimers and his wife, Eleonora Villegas-Reimers, Ed.M.’84, Ed.D.’88.

The simple story includes several surprisingly high concepts for a children’s book. Reimers speaks to Filomena in both English and Spanish, something he says he did to show readers a bilingual home.

The main themes of the first book are observation, empathy, and perspective. As Reimers writes through Filomena’s voice, “You can learn a lot about the world if you observe and listen. Observing is not just looking or seeing, and listening is not just hearing. To observe you have to think about what you see and hear. You have to ask questions.”

Reimers says some of what he’s learned in his career has found its way into the story, including the focus on early literacy and intergenerational observation that came from a book he published last year.

“Language development and literacy are so important to participate in society in inclusive ways,” he says. While those topics might be appropriate for graduate students, it could be a bit heady for young readers. But Reimers has had the best test market, sharing Filomena with faculty colleagues who in turn have shared the book with their children and grandchildren.

“One of the wonderful things when you have a community of colleagues is people step up and give you ideas,” Reimers says. One of the fans of Filomena is Professor Catherine Snow’s 7-year-old granddaughter, Juliet Baum-Snow, “a very critical reader,” he says. “She gives me wonderful feedback.”

Former students have also responded positively. One visited recently from Mexico, bringing Filomena drawings from their children. “You’ve made it when your former students’ children make art like that,” Reimers says.

Other fans have shared the book, which has been translated into 10 languages, in classrooms and other educational settings. There are also 10 schools in six countries in which older students read the books to younger students. The second book in the series, Filomena’s Friends, came out last summer; the third in December. Reimers laughs that his family members are his biggest fans but are also quick to remind him that he lacks children’s lit credentials. That’s exactly what makes writing Filomena such a joy, he says.

“Like any creative process, we’re only partially aware of the forces that get us to do what we do. I want to do something I’ve never done and learn everything about it,” he says. “It makes me feel like a child.”

Andrew Bauld, Ed.M.'16, is a frequent contributor to Ed.