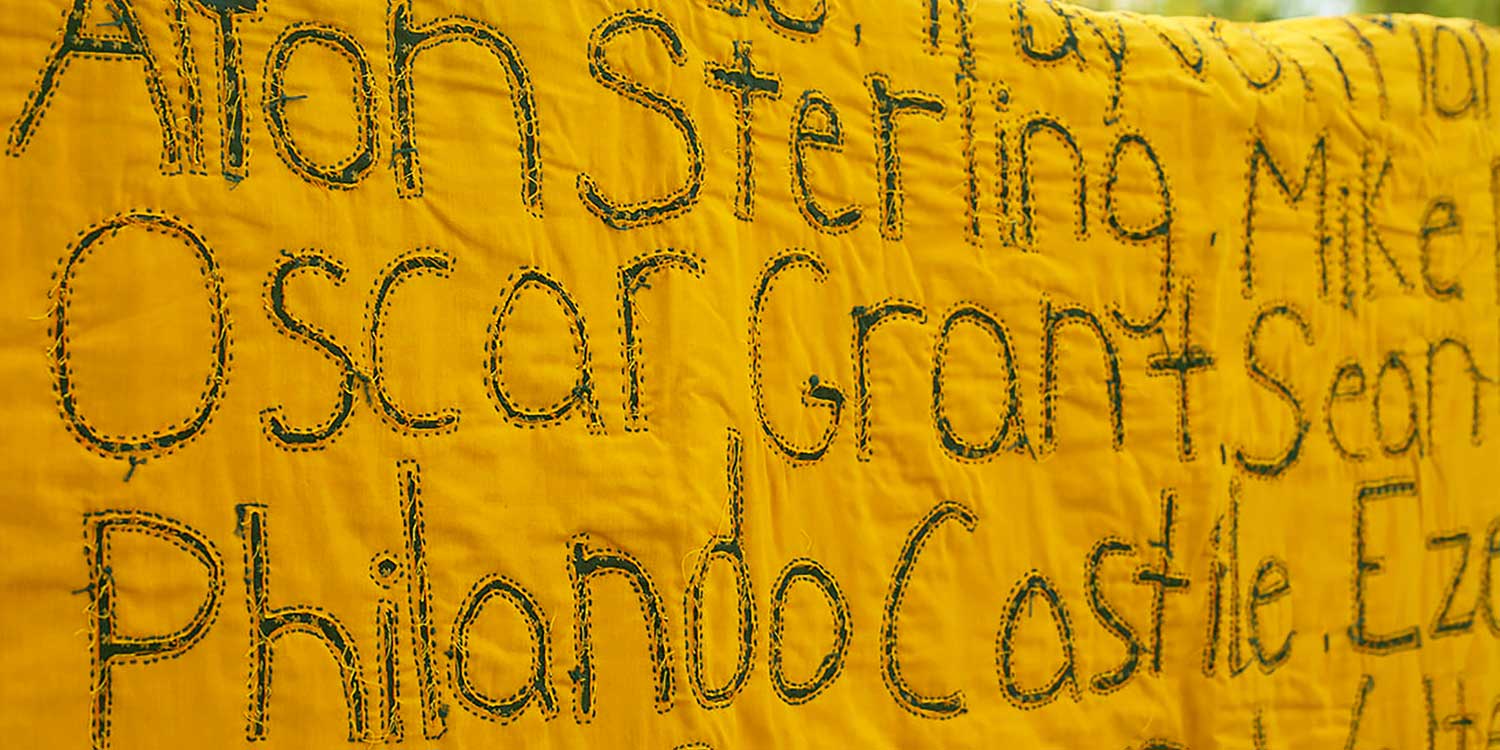 Activism, One Stitch at a Time

When social justice and sewing come together.

Sara Trail, Ed.M.’17, learned to sew from her mother and grandmother when she was just four. She was so good at it that by the time she was 11, she was teaching classes of 20 to 30 other kids on Sundays at her church through the Grace Temple Sewing Studio, which she started. It was fun and a way to make simple things like pillows and tote bags. Two years later, she wrote a book called Sew with Sara, produced a related video, and even had her own collection of designs for Simplicity patterns. Eventually, parents asked her to lead sewing activities at birthday parties.

But then when she was 17, in 2012, sewing took on a new meaning. Trayvon Martin, an unarmed 17-year-old boy, was murdered in Florida. Trail wanted to go to a local protest but wasn’t allowed so instead she turned to what she knew: needles, thread, and fabric. The result was the Rest in Peace Trayvon quilt, the first time she mixed her passion for sewing with social justice art. Trail gave the quilt to Martin’s mother at a Black Lives Matter event.

Art and activism would further come together when, in 2016, while an undergraduate at Berkeley, she founded the Social Justice Sewing Academy (SJSA). That first summer, 15 students learned not only how to sew quilts focused on a social justice theme that intersted them, but also about writers like James Baldwin and Maya Angelou, and about issues like immigration amd LGBTQ rights.

“It is all about youth empowerment and agency,” Trail says. “At first glance, SJSA is an organization that seeks to empower youth to create social justice art, but beyond the art it is really about empowering youth to think about how they can create change that is bigger than themselves. Youth create the art that communicates powerful messages, and SJSA strives to spread their art to amplify their voices.”

In shorter workshops, offered at libraries, jails, and other locations (like the Ed School, where she held two sessions last year), participants design a quilt square using fabric and glue. The blocks are mailed to embroidery volunteers across the country who sew each one. The blocks are mailed out again, this time to a quilter, who sews the blocks together to create a quilt. Finished quilts are displayed at schools, quilt shows, and community spaces.

“SJSA quilts are pretty popular right now because they are so not the normal standard of quilting,” Trail says. “Politics, equity, and social justice themes are not typically found in traditional or even modern quilt techniques. I really think a key component of yes, it is sewing; yes, it’s community; but it’s also much bigger because the art travels so much.”

In 2020, an Obama portrait quilt, currently being worked on by students at two high schools, will be displayed at the Barack Obama Presidential Center when it opens in Chicago. More recently, the project added an ambassador’s program for motivated students, says Claudia Cassandra Tapia, Ed.M.'18, SJSA’s organizational development director.

“The program started out of youth expressing their interest in being involved beyond just participating in a workshop,” she says. Ambassadors oversee workshops in their communities. Trail is humbled by it all.

“I feel honored to be able to help young people find their voices collectively on issues that they are passionate about,” she says. “So many mentors and teachers helped me find my voice. Now I’m able to mentor others to discover their passion through art activism.”