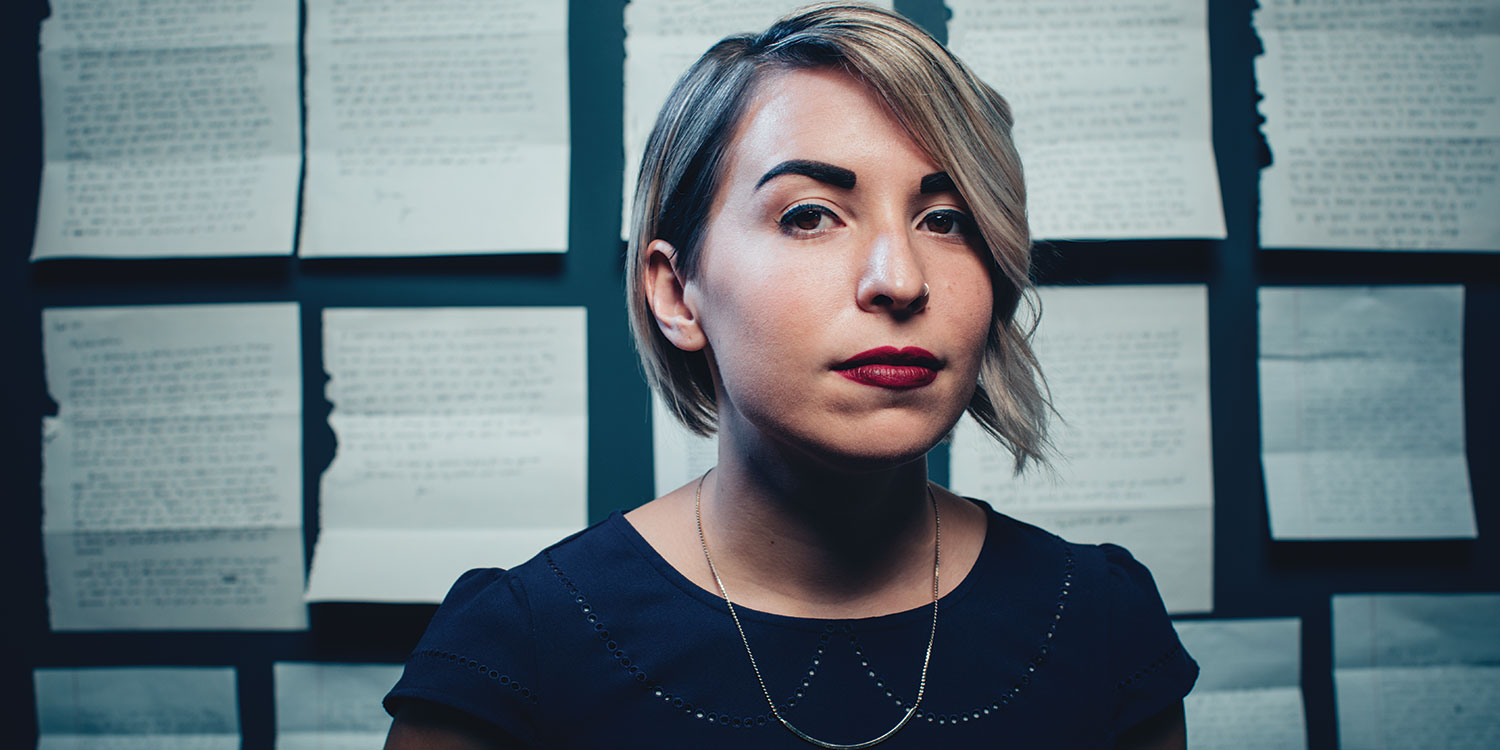 The letters, nine in all, are displayed on a table in Gutman Library. It’s the end of the fall semester and the 55 students enrolled in Education in Armed Conflict are presenting their final projects, each centered on an individual directly affected by conflict. A few of the projects are traditional papers, but most are more creative: photo essays, children’s books, short videos, and a podcast presentation.

And then there are the letters, all handwritten except for the final letter, which is typed. Created by Jessica Bergman, Ed.M.’18, the letters tell the story of John, a Sudanese refugee who fled to Uganda during one of Sudan’s civil wars. Spanning from when John was a young boy until the present day, where he is the executive director of his own NGO in Uganda, letters were written by Bergmann based on interviews with John, highlighting key moments in his life as a refugee.

“There was one letter that was written to a childhood friend once his family moved from their original village to the capital of Khartoum, where he discusses some of the differences in culture and educational experiences,” Bergmann says. Many letters are written to his father, a rebel fighter. After his father was killed, he wrote letters to his mother, who eventually fled to Kenya. The final letter is a call to action addressed to the people of South Sudan, asking them to find ways to contribute to lasting peace in the country.

It’s this type of insight into a refugee’s life that Associate Professor Sarah Dryden-Peterson, Ed.D.’09, who teaches the class, hoped students would take away from the semester-long project.

“We designed the narrative project as a way to keep the experiences of young people and families at the center of our thinking about education in settings of armed conflict,” she says. “As our students sit in positions of power and make hard decisions about policies and allocating scarce re-sources, we want them to think about how these decisions influence the lives of people."

Bergmann says that early on, she knew she was going to use letters to tell John’s story.

“There was one line during my interview with him that stayed on my mind for days: ‘I was born in the war. I grew up in the war.’ It was this idea that inspired this series of letters,” she says. “Having lived in conflict his entire life, it was important to me to find a way to encompass his full educational experience from primary to university, rather than only focus on one level of his schooling. A letter format allowed me to capture the personal nature of one individual’s experience while also being able to consider the people and moments that shaped his journey."

Having the letters look like they were written by John at each stage of his life was also important for Bergmann.

“There’s something about me that has always admired the tactile experience that letters allow for,” she says. “I thought about what materials he may have had access to.” For the first letter, written from John’s 10-year-old self, she used parchment paper and pencil. “Google was a great tool for reminding myself of what a young child’s handwriting may look like.” As John grew up, she varied the handwriting and writing utensils. The final letter was typed.

By the time the project was over, Bergmann says she moved way beyond her initial reason for taking the class, which was to better understand how conflict affects education broadly.

“This project added a layer of complexity in helping me to understand not just how educational infrastructure is affected, but how one’s individual educational experience is affected by conflict,” she says. “The gravity of the refugee crisis makes it seemingly simple to focus on the individuals who have been displaced, but what is not simple is understanding the unique challenges and experiences that each of these individuals have had.”