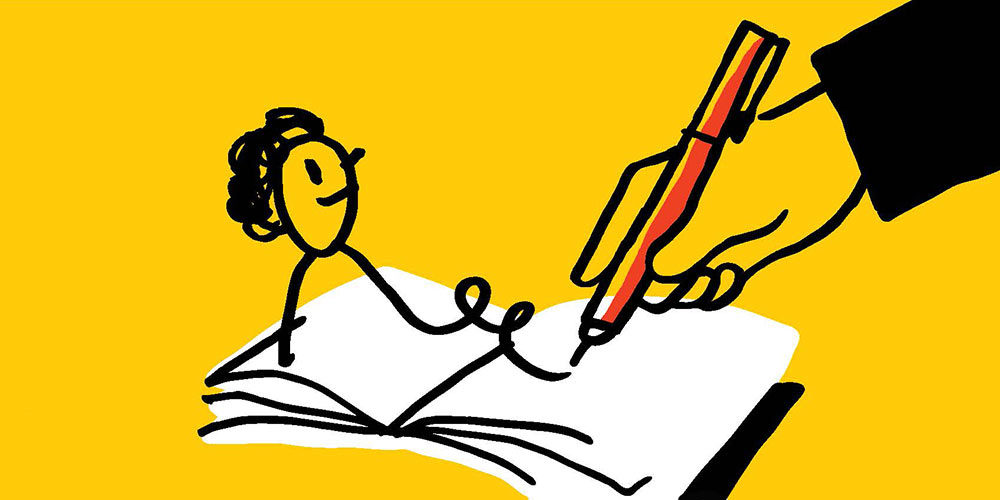 Cynae Punch Brown, Ed.M.’08, wrote her first young adult book, Pineapple Sugar, in part to encourage others to listen to that nagging voice in their head telling them to do something — start a business, take a class, or, like her, write the book. Brown, an instructor in the Urban Education Program at the University of Houston, talked to Ed. about motivation, grief, and how she reclaimed her creativity.

LIKE THE MAIN CHARACTER, YOUR MOTHER ALSO PASSED AWAY.
After my mother died, I remember returning to school, and one of the hardest parts of the day for me was dismissal and pick-up time. Usually, it was everyone’s mom who picked them up from school. I remember feeling so alone because the norm for me was having a mom. When mine died, I immediately became abnormal. As an avid reader back then, every story that was written had a mom, so every time I opened a book, I was reminded of how abnormal I was. Add to that the fact that the private school I attended had little to no diversity. I was one of two students of color in my entire grade. Trying to find someone to relate to an African American girl whose mom died wasn’t a reality for me. That’s what stuck with me. That’s what made me want to write a book about loss with a main character who is a person of color.

IS THIS STORY YOUR STORY?
Pineapple Sugar is not my diary at all. Pineapple Sugar, I would say, probably would be my ideal approach to grief. The main character knew what was happening. She was allowed the opportunity to prepare and ready herself. Pending grief and the idea of absolute death was not hidden from her, even at a young age. That’s what makes this book special to me. Although the book is written with the middle-grade student in mind, teachers, counselors, and parents are reading it and learning a healthy way to discuss death with young people who have loved ones with terminal illnesses. So often we try to protect kids and we don’t include them in processes that are vital to their understanding of death.

WERE YOU SHIELDED?
When my mom died, I was given very little information. Looking back, the signs of her being really ill were all there. But I was in elementary school, so I didn’t see it coming. All I knew is that she went in the hospital on Thanksgiving Day and never came back. It wasn’t until years later in talk-ing to my grandmother that I started getting bits and pieces about her battle with Lupus.

YOU WROTE A LETTER TO AN AUTHOR WHEN YOU WERE A KID AND SHE CALLED YOU?
I have always been analytical, even as a child. If something didn’t make sense to me, I wanted answers. That’s pretty much what our conversation was when she called me while in grade school. Now fast forward about 30 years, and Eleanora E. Tate is still impacting my writing. I 2018sent her my first draft, which she lovingly marked up and sent me back to the drawing board. Along the way, she has pointed me to resources and has given me lots of helpful information to help make me better. I’m far from being on her level. Still, I’m so thankful for her commitment to her readers. You just don’t find that in today’s literary world.

HOW DID HGSE MOTIVATE YOU?
HGSE gave me the opportunity to run, jump off that academic cliff, spread my wings, and soar. One particular memory that I have is [former professor and Ed School alum] Thomas Payzant’s story of how he had never been a principal before becoming the superintendent of Boston Public Schools, a position he held for 11 years. Every time I get ready to shirk a personal or professional opportunity, each time that voice in the back of my head says, “You don’t have enough experience to be successful at XYZ,” I honestly think of him. And then I go for it.