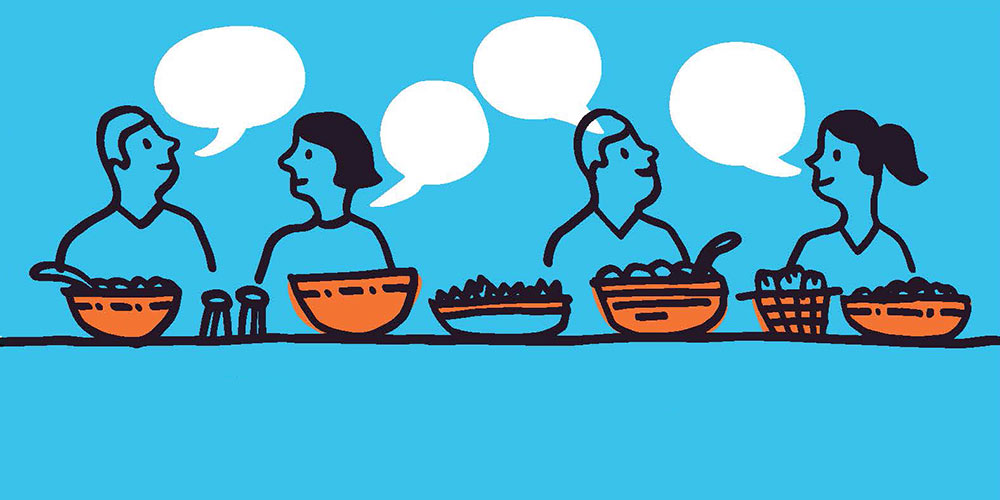 Family therapist Anne Fishel half-jokes that people in her profession could be out of business if more families just had regular family dinners together.

Fishel is basing this on more than just two decades of research showing the positive effect of eating together as a family. She has also seen it in person as cofounder of Project Zero’s Family Dinner Project, along with Shelly London, a retired corporate executive who came up with the idea in 2009 when she was a fellow in Harvard’s Advanced Leadership Initiative.

Studies show that regular family dinners can be linked to lower rates of substance abuse and depression, as well as improved physical health. But making this happen can be hard for families, says Lynn Barendsen, the project’s executive director.

“Families want to make dinners happen but don’t always know how to do it,” she says. “We’re there to support them.” Online, the project offers free resources such as recipes and dinner games.

WilsonThere’s also a four-week program to get families started, which includes helping them overcome obstacles to eating together such as too many activities, not feeling comfortable in the kitchen, or a single parent working two jobs. Still, Barendsen says that across economic sectors, families have found ways to eat together in a meaningful way. For example, she tells the story of a 16-year-old girl living on a farm whose family often had to eat while working.

“Sometimes dinner would be in the fields. They’d pause and eat together on the tractor,” Barendsen says. “This family didn’t think about not making it happen.”

Barendsen stresses that parents need to forget the image of the perfect (unrealistic) family dinner they see in the media.

“I say don’t let the perfect be the enemy of the good. It’s really about bringing family together and taking a moment to pause over food,” she says. “It could be spreading out a blanket at the kids’ baseball game or sharing dessert. It doesn’t have to be a four-course meal. That’s a nonstarter right there.”

Recently, the project began working with the Blue Star Families nonprofit to organize community dinners and meal swaps for military families. They’ve also partnered with Common Sense Media on a dinner project that addresses the challenges of technology at the table.

“We’re not the tech police,” Barendsen says, “but technology is one of many distractions, and every family needs to figure out what works for them.”

And when they do, and the family dinners happen, it’s beyond gratifying, London says.

“Families share stories about cooking together instead of eating separately, about laughing instead of fighting at the table — over and over, people tell us the difference that the Family Dinner Project makes in their lives,” she says. “It’s pretty cool to know that we had an idea and then got to see the impact happen. While I loved my career as a senior corporate executive, social impact is incredibly rewarding.”