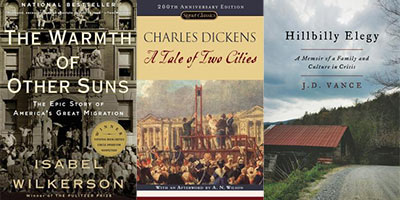 THE THING THAT DREW YOU TO IT: Two reasons. Like many Americans, the most recent election results were cataclysmic for me. As the campaign ensued, I realized that there was a large segment of Americans and American culture about which I knew very little. In fact, I’d come to know of people in South Africa more than I knew of white people in the rural South. The second is that my faculty colleague Mary Grassa O’Neill and I teach a course called Race, Equity, and Leadership (REAL), and in order to better understand how we’ve gotten to this post-election America, I knew I needed to better understand the other side of the racial narrative. This book is part of that learning as I “seek first to understand then be understood.”

FAVORITE BOOK FROM CHILDHOOD AND WHY YOU LOVED IT: A Tale of Two Cities. It was part of a summer reading assignment in 1965 and the “best and worst of times” in 18th-century France seemed to parallel the ’60s civil rights struggles, especially the 1963 killing of four little girls, who were about my age, in the Birmingham, Alabama, church bombing. I resonated with the feelings of poor people so aptly depicted in the novel and seemed to share and understand their rage as I witnessed injustices and brutality during the marches and protests shown nightly on the evening news. I hoped that I’d someday do something brave like Sydney Carton. While it hasn’t cost me my life, I believe being an educator takes courage, along with wisdom and compassion. It’s why my K–8 teaching license is the credential I most prize and it’s the tool I’ve used to try to make the world better.

LAST BOOK YOU READ THAT SURPRISED YOU: Although I read it a while back, I loved The Warmth of Other Suns by Isabel Wilkerson. In 2000, I reconnected with my dad, whom I hadn’t seen since I was four. He died the following year, and there was much I didn’t know about him or, quite honestly, forgive. Reading about the great migration from the South, in his case from Georgia, opened my mind and heart to the great pain and challenges he and others experienced both in Atlanta and later in New York. It also reminded me of the privileges I’ve enjoyed that he never experienced.

FAVORITE SPOT TO CURL UP WITH A BOOK: In Richmond, I sit in [my late husband] Cornelius’ recliner with our dog, Nyro, at my feet. In Cambridge, I stretch out on the couch, usually with Nyro next to me. Sometimes he peeks at what I’m reading; I laughingly think he’s smart enough to be reading too.

NEXT UP: I’ll be working on my own book, Demography Isn’t Destiny: A Leadership Quest for Excellence and Equity this summer. Hopefully it’ll be on everyone else’s reading list next summer. Answering the Question: Why the Ed.L.D.?