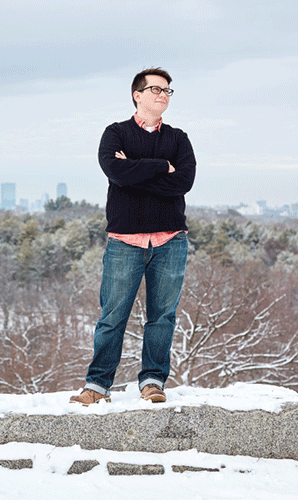 The first time Ethan Smith went with a friend to a poetry group at Berklee School of Music, he wasn’t sure he was going to like it. The sax was his thing and had been since the eighth grade. “I was in love with the sax,” he says. “It was everything I did in high school.” But listening to other students at the poetry group, he found the experience incredibly inspiring.

“It was amazing how honest everything was.” Smith changed course and ended up minoring in spoken word. “It became what I devoted most of my time to.”

Some of this time included helping Boston teenagers perform spoken word poetry through the 826 Writers’ Room, a nonprofit youth writing and publishing organization. Smith was also working on his own writing, mostly personal pieces connected to his transitioning, including “A Letter to the Girl I Used to Be,” a powerful piece he performed this past fall at the Ed School’s storytelling event, Double Take. “I was trying to figure myself out,” he says, “something I encourage my students to do, too.”

Now finishing his year in the Arts in Education Program, Smith says we all have unique stories to share, but we often don’t think about how sharing these stories can help not just ourselves, but also people we haven’t met.

“It’s an extremely powerful experience to be able to share some piece of our individual truth through poetry,” he says. “Equally as powerful is when someone reaches out and says that they connected with the piece in some way. It takes bravery on the part of the poet to say their piece, but what comes from that is a representation of survival that many people may share but didn’t necessarily have the language to articulate. Through sharing our art in this way we can start to build a community and connect deeply with one another.”

When he first started sharing his own story about transitioning, he says he didn’t give his hometown community just outside Seattle enough credit for being able to understand.

“It’s impossible to be compassionate about something that you’ve never been exposed to,” he says. “But after I came out, I was really surprised how supported I was. I’ve had former teachers reach out to me on Facebook. And my family has been supportive.” His dad even signed up for creative nonfiction writing classes to help him figure things out.

“It’s been inspiring to me in my process,” Smith says. “He shows me drafts. It’s cool to see how he’s processing this.”