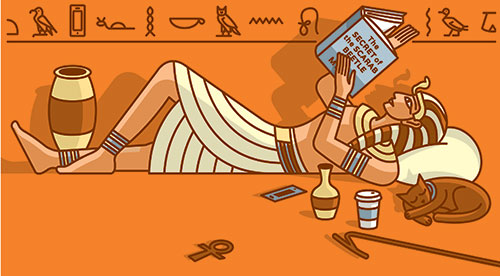 When your grandfather comes to your school in the first grade, after a trip to Egypt, and shows your class the dried-up face of an unwrapped mummy, it’s not surprising that an interest in all-things Tut and tomb would develop.

For Bill Meyer, Ed.M.’04, this meant leading his third-grade class two years later in a demo mummification of dolls. After college, he started teaching high school history, including sections on Ancient Egypt. More recently, Meyer started writing about that time period with Horace j. Edwards and the Time Keepers, his middle school adventure series set partially along the Nile. This April, the second book in the series comes out.

He remembers the first time he shared the idea for the book series with his wife. They were in a New York City taxicab.

“I told her that I had this idea for a kid who time travels through a tree in the backyard of his grandparents’ farm and goes back and meets King Tut,” Meyer says, describing what would become the plot of his first book in the series, The Secret of the Scarab Beetle. “When we got out of the cab, she turned to me and said, ‘Don’t tell anyone else about this idea. It’s good.’ It was really funny because she was worried that the cab driver was going to steal the idea as well.”

At the time, Meyer was getting his Ph.D. at New York University and teaching, so he had no extra time to take a writing class or find other writers to workshop his manuscript. Instead, he had to dig in, rely on friends to give feedback, and lean heavily on his strength: knowing the history of that time and place.

“So much of the inspiration for this story is based on historical facts. The characters, the places, the names, and even many of the objects are real,” he says. “There’s nothing by chance.” The names in particular have meaning. Horace, the series’ main character, for ex-ample, was named, in part, after a stuffed animal that Meyer lugged around as a kid.

“When I started working on the story, I asked my mom about it. She said yes, it was Horace the Hippo. Horace is also an Egyptian god and one of the most famous residents in Niles, Michigan,” the real-life town where the book is set. That famous resident, Horace Dodge, was married to Anna Dodge, the name Meyer used for the protagonist’s best friend. Mr. Petrie, the teacher in the book, is based on the famous Egyptologist Flinders Petrie.

This fall, Meyer continued with the book tour for the first book, which included classroom visits where he read chapters to students and offered related book content that he created, like a glossary and in-depth curriculum guide, to teachers. He also wrapped up the writing on his second book in the series — something that consumed far fewer hours this time around.

“The first book took five years to write, the second, five months,” he says. With round one, “I had to learn how to write. I gave it to people to read. I thought I was going to have to self-publish, then an agent saw it and said, “Don’t self publish.” Then it took a year to get it picked up and 18 months of back and forth and reworking,” he says. “It was exciting, but it was definitely baptism by fire.”