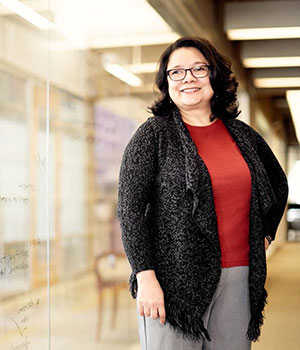 Growing up, Gladys Aguilar spoke in two worlds: Spanish at home with her parents, who had moved to the United States from Mexico when she was a toddler, and English at school in Los Angeles. The two worlds rarely mixed.

So when Aguilar’s homeroom teacher asked her to give the sixth-grade graduation speech, the 11-year-old wrote it the way she had every other school assignment: in English.

“My teacher read the speech and said, ‘Great. Now write it in Spanish.’ I was so surprised and reminded her that I speak English. She said something beautiful, something that changed who I was: ‘Of course I know, but I want your parents and the other parents who speak Spanish to hear your speech.’ This valorized who I was and still inspires me daily.”

It even inspired her to leave the classroom after 17 years as a bilingual elementary school teacher in Los Angeles County to start the Ph.D. Program at the Ed School. Based on what she was experiencing at home with her two bilingual sons, and at school with her mostly Latino students, she says she realized that one area sorely lacking in research — and in usable knowledge for teachers — is how best to serve the academic and socioemotional needs of students whose home language is not English. Part of the problem, she acknowledges, is that there is no one type of bilingual student.

“Some bilingual students are exposed to two languages at home and speak both. Others speak one language exclusively at school, one at home,” she says, like she did. Others, like her two sons, increasingly resist speaking both languages at home as they grow older or when they start to sense that some home languages (like French) are considered “high status” while others are less respected. Older students may react differently to instruction than younger students.

“For these reasons, it’s a complex issue and one that is a hard area to research and develop curriculum for,” she says. Yet, as the percentage of non-English-speaking U.S. households has increased more than 140 percent since 1980 and is projected to grow even more, Aguilar says research into what students require and how teachers can help them succeed is needed now more than ever. “We have an increasing number of children who are bilingual,” she says, “and we’re seeing more school leaders who are aware of the educational landscape and are wondering what they are going to do to help their teachers.”