Two recent graduates return home to Haiti and Nigeria to focus on a key piece of education reform: helping teachers become better at what they do 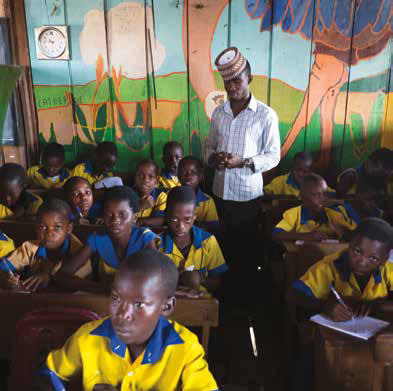 One organization is based in Haiti, the other more than 5,000 miles away in Nigeria. But both were started by Ed School alums and both focus on something desperately needed in their countries: better teacher training.

In Haiti, Nedgine Paul, Ed.M.'12, started Anseye Pou Ayiti because she says her native country lacks a datadriven, culturally relevant system for recruiting and training highcaliber teachers where they are most needed — in rural and underserved areas where about 70 percent of Haitians live but fewer than 30 percent of children from low-income households will complete even primary school. It is estimated that only about 20 percent of Haitian primary school teachers are formally trained. That's hugely problematic because, as Paul points out, "teachers are leaders who can change the trajectory of students' lives and the future of an entire community."

The first cohort of 30 teachers started last year, training for one month during the summer, plus monthly workshops during the school year, lasting for two years total. Teachers learn new skills like how to better communicate and mobilize the community. The teachers, who are already working full-time in rural or underserved schools, also receive individualized coaching in their classrooms every two weeks. Within five years, Anseye Pou Ayiti hopes to train 250 teachers.

What's unique, says Paul, who was recently named one of the top 30 under 30 social entrepreneurs by Forbes magazine, is that the training is rooted in the Haitian culture and community.

"We believe that we can look inward to push forward," she says. "One example is prioritizing our local Haitian Creole in training and classroom instruction, which is often sidelined for teaching in French only. We also want students to value and be proud of where they come from, so we seek to integrate Haitian proverbs and folklore in how teachers are preparing lessons for any subject."

In Nigeria, Nneamaka Enechi, Ed.M.'11, created EdVigor to help teachers develop their skills in literacy and math by offering week-long professional development workshops with master teachers from around the world. This summer, the first cohort of 37 teachers will be trained, leaving with a deeper understanding of how to design hands-on activities for students and how to embed character education in classroom lessons. The goal is to train about 100 teachers each year.

This wasn't initially the direction Enechi planned on going after graduating from Harvard. She thought about starting a new school in Nigeria, but then realized she would have more of an impact focusing on the education system as a whole, beginning with new teachers training under and learning from more experienced teachers — a model that was successful at the public school where she was working in Boston. Enechi says, "Teacher training is critical in Nigeria because education reform only happens when teachers are change agents leading the change movement in their classrooms."

Although there are the usual challenges for any new startup, particularly around funding, Enechi says she isn't fazed, thanks in part to her time at the Ed School. "I learned how to have the confidence," she says, "to take on challenges that lead to impactful change."