A New Definition of Quiet, One Podcast at a Time 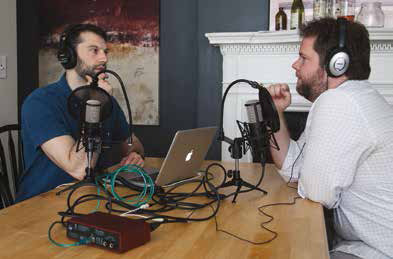 I think both of us knew we had something special we wanted to capture from the very first day we arrived at the Ed School. Sitting in our Arts in Education (aie) cohort's orientation, we heard amazing stories from our classmates. Someone had been teaching piano in Tanzania. There were actors and musicians, writers and dancers, museum educators and arts advocates, all with extraordinary stories. And we decided we wanted to find a way to share them with the world beyond just our cohort.

Mike Lipset, Ed.M.'16, and I had lunch in the sunken garden along Appian Way during the first week of school. We discovered a shared interest: Both of us wanted to make a podcast. But what would it be about?

There aren't too many podcasts out there that cover the arts and education. But there we were, in a cohort called Arts in Education. Our theme was picked for us. Mike was a hip-hop artist who came to Cambridge with all the equipment and skill we would need to record and edit. I had a journalism and writing background, and figured that I'd listened to enough npr to do a fairly good impersonation of a host.

We quickly accrued pages of notes for episodes and story ideas. We shared our idea with the cohort and enlisted classmates to help, from designing a logo to recording music. Eventually our team grew to include fellow aie members Jasmine Chin and Jamie Ayelet Laytner, both Ed.M.'16. Originally the idea was to capture and share our cohort's stories. Then it grew. It became our final project for Assistant Professor Karen Brennan's Designing T550 course. We built a website. We worked on social media and crowdfunding campaigns. We named the podcast The Palette.

From the start, The Palette grew roots beyond the confines of Appian Way. Our first episode covered the use of arts and education in healing. We interviewed the first writer in residence at Massachusetts General Hospital, Suzanne Koven, who is using literature to train doctors in empathy. We sat in a crowded hallway at Berklee College of Music to talk with the head of the Longwood Symphony Orchestra, made up of medical professionals from around Boston.

Our second episode covered crowdfunding in the arts. We Skyped with a Harvard Business School professor who studied the differences between expertfunded and crowdfunded arts projects. In January, we visited local area education nonprofits that are using interdisciplinary education and the arts to reach young people in novel ways, including an organization that works with special education students to build small rowboats.

It's been an incredible process of tinkering. We learned a new definition of quiet after recording in a seemingly silent room only to discover the distracting creaks of the heating system and refrigerator. We learned that it isn't always a good idea to jump into an interview without first warming up our guest. We learned that people will completely surprise you when put in front of a live microphone.

We have a lot more learning to do. We're still working on growing an audience. We're looking for sustained funding. And, perhaps most important of all, we realized that this project might just turn into a lifelong pursuit.