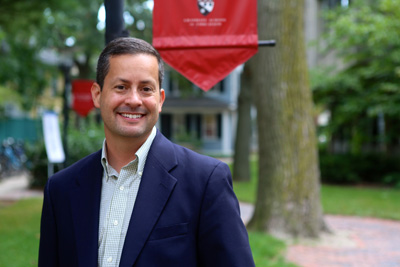 After nearly a year at the Ed School teaching higher ed classes, Senior Lecturer James Antony says his experience has definitely been a 10. "Great students who are super inquisitive," he says, "and fantastic faculty colleagues who are collaborative and willing to share ideas for class assignments and cases." Antony is so smitten that this Dodgers and Mariners fan is even ready to don a Red Sox hat. "The one thing these two teams have in common with the Sox is that they are rivals of the Yankees. No offense to the Yankees, but I would gladly wear a Sox hat in solidarity with my Boston sisters and brothers."

1969 I was born in Los Angeles. We lived in Glendale, California, until I was 6 years old. Neither of my parents went to college, but they were both fierce proponents of education and pushed their children to do well in school.

1975 My family moved to Thousand Oaks. Our house, a fixer-upper, immediately became a construction zone as my father, a gifted carpenter, spent the next few years remodeling it to accommodate our growing family. Watching our dad work all day at his job, then come home and work long hours on the house made a lasting impression on my two brothers and me; it taught us the meaning of dedication and purpose. Unfortunately, despite our father's best efforts to teach us carpentry skills, none of the Antony boys ever became terribly handy.

1979 In fourth grade, I was introduced to music. At first, I played the clarinet in the school band. Eventually, I became an oboe player. Being a musician opened a world of opportunity to me. Because of music, I got to travel and meet interesting and diverse people. I was also exposed to different colleges and universities where I might one day study. Music was a driving force in the socialization of my two younger brothers, as each of them also played instruments.

1987 I took my first airplane ride as part of a music trip. I loved it and vowed to travel as much as I could in life. I also took part in a music competition at UCLA and, after I graduated from Thousand Oaks High School, began my years as a UCLA undergraduate.

1988 My college years were a blur of activity, mostly shaped by my involvement in college music groups. I also found time to be on the UCLA crew team (through which I learned, for the first time in my life, about the Ivy League universities), to be a resident assistant in the residence halls, to be an orientation adviser, and to work in the admissions office as a tour guide. All of these experiences helped shape my ambition to work in a college or university.

1990 I took the most important class of my college career, called Education 180 (The Social Psychology of Higher Education), as a UCLA undergraduate. I learned about the theories of college student development, the structure and governance of higher education, and the challenges of higher education. I fell in love with the content of the course and began to imagine conducting my own research on higher education topics.

1992 I began my Ph.D. studies at UCLA. As a graduate student, I met some of the most amazing colleagues, many of whom now serve on the faculties of universities around the nation and with whom I continue to interact regularly.

2006 I spent one year as an American Council on Education fellow at Yale University. This fellowship allows individuals to work closely with leaders at another institution, from whom they learn about higher education leadership in a different context. This was my first experience with an Ivy League institution, and I learned a great deal about the importance of institutional culture and the differences between the public and private sectors of higher education. I also learned that bulldogs, though very cute, drool a great deal.

2007 I returned to the University of Washington where, in addition to serving on the faculty, I held several leadership roles over the years, including special assistant to the executive vice provost, associate dean of the college of education, and associate vice provost and associate dean of the graduate school. This time back at Washington helped me to focus on the things that mattered most to me: writing things that I felt made a difference, working even harder to become a better teacher, learning how to collaborate with a very diverse array of other faculty leaders, and finding ways to create college experiences for students that were as rich and varied as the one I enjoyed so many years before.

2012 Even though Washington was an amazing university, I departed to go back to Yale where I served as an associate provost.

2015 I started my faculty role at the Ed School. I love it here. The community feels inclusive to me. It feels like a natural fit. My teaching is the strongest it has ever been because I have a host of previous experiences upon which to draw and because I am at a stage in my career where I can look back and fully appreciate what everything has meant so far. And although, even to this day, I continue to have no ability to use tools to work on projects around my new home, I know that I can work with my amazing Ed School colleagues and students to build upon the amazing successes of the higher education program that I am so honored to join.