Why one staff member broke back into prison to teach 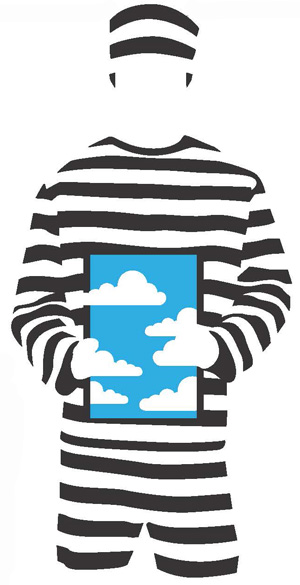 Whatever he's doing time for at MCI–Norfolk, a medium-security "warehouse" for nearly 1,500 convicted felons in Massachusetts, what matters now is that he is standing in front of my English class on a Wednesday evening in his t-shirt, sweats, and sneakers. He may have dropped out of high school because there was easy money to be made dealing drugs on the streets of Springfield. He may have thrived under the toughlove treatment at a parochial school in Lowell but somehow got sidetracked. Learned financial entrepreneurship — in the underground economy in Chelsea or New Bedford. Now he's a college student, making up for botched time.

It's the same prison where Malcolm X first hit the books, and since the founding of the Boston University Prison Education Program in the 1970s, many men here have worked hard toward earning bachelor's degrees. Every year, several file to the front of the visiting room in cap and gown to pick up their degrees. In due time, many proceed to the streets, their chances of recidivism greatly reduced by their educational experiences.

Whatever his history, he is the reason that back in 2002, after 15 years away, I returned to prison to teach English. I'd started teaching at UMass–Boston's now-defunct program, but then got work at the Ed School and stopped teaching for years. Then, the director of the BU program heard me introduce an Askwith Forum by Jean Trounstine, author of Shakespeare Behind Bars — an account of producing Shakespeare with women at MCI–Framingham — and invited me to break into prison once again.

Back in class, maybe the assignment was to write a narrative demonstrating membership in a community, and the guy at the head of the class has elicited chuckles with his account of life as an underachieving painter on a construction crew. Maybe it was a "before-and-after" comparison-contrast assignment, and he has sobered his classmates up with a description of holiday festivities at his home the year before and after a cousin was killed. This semester, I'm at MCI–Framingham, the sole women's prison in Massachusetts, in a building where Clara Barton once presided as superintendent. It's Wednesday evening, and the young woman at the front of the class has read her description of Winslow Homer's painting The New Novel or her analysis of Virginia Woolf's own use of comparison-contrast in Shakespeare's Sister. Perhaps, in response to my "slanguage" assignment, she has written about code-switching from Caribbean Spanish to black vernacular English to social media lingo. Or it's her analysis of metaphor in Martin Luther King's "I Have a Dream" speech, complete with the grammatically graceful incorporation of quotations that I endorse and adore. Whoever she is, she is also the reason I continue to teach.

Whether at Framingham or Norfolk, proud of their enrollment in the program, the students have painted the classroom walls the cheerful red and white BU school colors. The stenciled image of the ever-ferocious BU terrier mascot, more threatening than the warm and respectful students in the class, watches over to make sure something at least remotely resembling higher education is happening.

Soon we'll discuss essays from the textbook, study evidence of "showing" rather than "telling," do exercises in paragraph coherence. There will be talk of thesis statements and topic sentences, extended examples versus multiple examples, effective ways of introducing and concluding essays — with, most likely, some jocularity involved. But first it's show-and-tell time, and the student at the front of the class, in t-shirt, sweats, and sneakers, has read aloud this week's assignment and is happy to take questions and comments.

Scott Ruescher is the program administrator for the Arts in Education Program. His new chapbook of poems, Perfect Memory, includes at least one poem related to prison education.