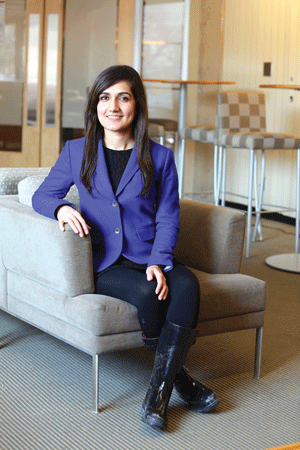 Growing up during civil war in Kabul, there are things that Zohal Atif doesn't want to remember, but she does. Like autumn 1992. She was six years old, in first grade. One morning, a group of militia attacked her school, setting it on fire.

"I didn't know what was going on," she says. "It was chaos." Two older siblings — a brother in third grade, a sister in second — grabbed her and ran home. She never knew who survived and who didn't. Now a student in the International Education Policy Program, Atif talks about leaving Afghanistan and helping a new generation back home.

There was a ceasefire. We had to evacuate. My uncle showed up on his bicycle and said, "Let's go." My mom, dad, and uncle walked. Us four kids were settled on two bicycles. We took the back roads to avoid check posts set up by different militia groups. We only took essentials and locked the rest. Eventually it got so bad we had to leave the country, to Pakistan.

My parents knew that if we had stayed in Afghanistan and later the Taliban took over, there would be no education. That's why we moved around. No excuses. We had to keep learning.

The United Nations High Commissioner for Refugees was running a program to settle Afghan refugees. There was no hope for us in Pakistan as refugees because they have their own challenges of educating their population. On August 30, 2001, my family, along with 12 other families, flew out of Islamabad. Six of those families, including my own, continued on to Boston.

Last summer, I went back to Afghanistan with my mom and dad for the first time since fleeing. We walked through our old neighborhood. I was happy to see the school was rebuilt, but I was disappointed to see the quality of education. The curriculum is focused on memorization and imparting blind obedience; there is no focus on critical thinking. I knew then that I wanted to work in education. People are so motivated to learn, and each day children and youth, despite many challenges, head to schools and colleges. There's hope.

Education through books is important, but there are other ways to improve literacy. Technology is improving in Afghanistan rapidly and we can use that to improve literacy. I want to develop ways that the school can go to its students. For example, if a girl can't leave home because of security issues, if you have the school come to her, that will help. Also, education should empower communities to develop solutions that make sense for them. That will not happen overnight, but as we say in Afghanistan, drop by drop a river is formed.