Soldiers of the Soil 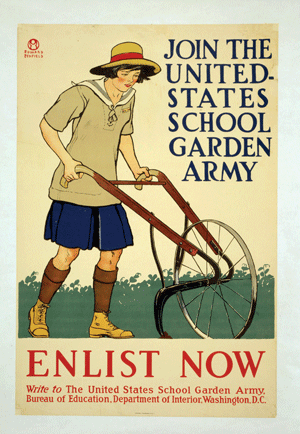 The year was 1918. Philander Claxton, the commissioner of education in the United States, reached out to students across the country — not about standardized tests or preschool for all, but about something he called "joyous" and "useful": school gardens.

Earlier in the year, Claxton had written a letter to Franklin Lane, secretary of the interior, and President Woodrow Wilson, to ask that young people, starting around age 9, be recruited to grow food so that more farm-grown products could be sent oversees to soldiers fighting in World War I, as well as to hungry allies in Western Europe. Based on the war garden movement started by Charles Lathrop Pack the year before, this new United States School Garden Army would recruit child "soil soldiers." These soldiers would learn about horticulture and find space to grow crops anywhere they could — side yards, vacant lots, and school grounds. Students were given "obligation cards" to record daily gardening observations, which they would give to teachers, who were trained as supervisors.

Wilson jumped on board the project, appropriating $250,000 from the National Security and Defense Fund. In a letter to Lane, available in an original 1918 publication in Gutman Library's Special Collections, Wilson wrote, "Every boy and girl who really sees what the home garden may mean, will, I am sure, enter into the purposes with high spirits, because I am sure they would all like to feel that they are in fact fighting in France by joining the home garden army." This effort, Wilson said, "is just as real and patriotic an effort as the building of ships or the firing of cannon."

Within months, an estimated 20,000 acres were converted into productive land, with public places like the Boston Common serving as "demonstration gardens" where students and teachers could learn techniques and garden design. Civics groups like the Rotary and Kiwanis clubs provided funding and support. And the children responded: A million and a half students enlisted. As a 1919 government document stated, the garden army gave young students something to do — "something that helped to carry the burden of their country in the struggle for freedom, something that helped them to build character, and something that appealed to and developed their patriotism."