The Making of a Professor 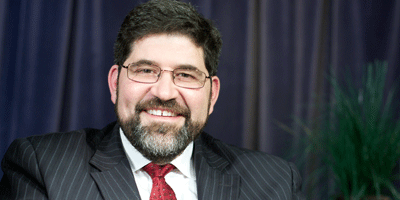 I was born in the small town of Jovellanos in Cuba on June 14. Both my parents had connections to education. My father and his best friend founded a night school that taught business to local students and merchants; my mother was a teacher at a local school before she married.

An early signature of the Cuban Revolution was a campaign to end illiteracy. Local youth mobilized to go to the countryside to teach those older to read and write. The campaign was an early memory and an influence on my conception of how community and schools can function together in ways that were previously thought impossible.

Entered formal schooling across the street from my house, and met some of the friends who are still among those closest to me today, thousands of miles and decades away from that first classroom.

Emigrated to the United States, spoke no English. Settled in a Cuban enclave community in Union City, New Jersey along with my parents and siblings. My mother's large family had left Cuba between 1961 and 1969. We were the last to leave, and they were all waiting. So it was not only loss, it meant reunion. I attended Thomas Jefferson Junior High School and Union Hill High School, where I met a new set of friends and mentors who became significant supports in my education. I have spoken often about how Union City schools provided for me a stream of high expectations during a time of transition from adolescent to young man, from a single, national, ethnic, and language identity to one far more complex and inclusive of those who now enlarged my experience in extraordinary and new ways.

Started at Columbia University. The most salient thing I remember was the ambivalence of my parents and community. On one hand, their deep pride in their high-achieving son; on the other, fear that leaving the community would change him, socially, emotionally, and politically. Columbia and New York City were a feast!

Next was Harvard Law School. It was a step in line with the immigrant arc of achievement. I interned in law firms in Miami and New York during summers. It was during my Miami internship, which overlapped with the aftermath of the Mariel boatlift of Cuban refugees in 1980, that I first sensed that practicing law might not be my eventual destiny. I was interested in the refugees' lives and the dynamics of the communities welcoming them far more than the legal aspects of what was happening.

After graduating from law school, and practicing law, I decided that I had to change direction. I could never really explain why, other than a sense of missing what mattered to me. I have never regretted the decision. I traveled and then started teaching at a Center School for classified emotionally disturbed adolescents in Newark, New Jersey, as a short-time project. I stayed in teaching for the next 12 years.

I had taken legal custody of one of my students earlier in the decade and became frustrated with the options available for him in Newark. I began to think about changing the system in which I was working and the way it served students, parents, and teachers. I went back to Harvard to become an urban superintendent at the Ed School's Urban Superintendents Program.

Moved to New York City to become chief of staff and then deputy chancellor for teaching and learning during Mayor Michael Bloomberg and Chancellor Joel Klein's Children First reforms of New York City public schools. In New York City I learned about a new pace of change, about the challenges of scale, and about the dilemmas of trying to change how schools worked across an enormous span of interests, understandings, and needs.

Thirsty to put the new learning to practice on my own, I left New York City to become CEO of the public school system in Baltimore. I thought the challenges of Baltimore reminded me of what I had experienced as a teacher in Newark. Baltimore quickly became home. I built a great team and with them helped create a sense of urgency on behalf of students, families, and schools.

I came back to Harvard to teach others, hoping that some will become instruments of change and improvement in the public schools I have tried to improve. It's been great to be able to look back, with a little detachment from the fray, and share my experiences with very passionate students.

Today, almost two years later, I feel very optimistic about the future of American education, despite the constant drumbeat of conflict and criticism that dominates the public discourse about U.S. schools. There is a centrality in the national conversation, a sense of opening in the educational world, and an explosion of new forms of learning for teachers and students that I think create possibilities that were not there before.