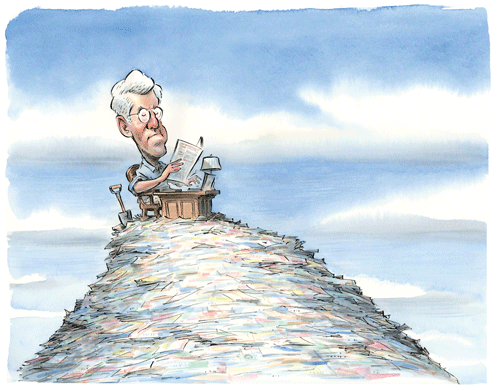 For years, working as the principal at the Mather Elementary School in Boston, Kim Marshall, Ed.M.'81, tried to stay on top of the latest education news and research. He subscribed to publications like Education Week and The Reading Teacher, but hectic days would get the better of his time.

"It was difficult to keep up," he says. "I'd catch up over a vacation, but even then wasn't entirely successful." He thought if only someone — a designated reader — was reading all of the relevant publications and writing short summaries.

Little did he know that after leaving Mather a handful of years later, that designated reader would be him.

"I finally had the time to read," Marshall says, especially when he started traveling back and forth to New York, where he was recruiting and coaching urban principals for the nonprofit New Leaders for New Schools. His idea was to create an online newsletter with short summaries of about 10 articles that he would distribute once a week to busy teachers, principals, and other education leaders.

Starting in August 2003, with about 100 people on his distribution list, Marshall launched the first edition of the Marshall Memo. Initially he was pulling from about 20 publications, but over time, that number jumped to more than 200 after getting suggestions from readers and browsing the periodical stacks at Gutman Library.

He says his readers, now in the thousands, have come to rely on three things: his judgment to find the right pieces, his ability to write user-friendly summaries that can be read in about 20 minutes, and his diligence to getting it to them on the same day every week — Tuesdays, with the exception of a two-week period during the summer when he goes on vacation. (His weekly routine never strays: He spends about eight hours on Sundays reading, almost all hard copy, then writes the text on Mondays. "Monday is hell," he says. His wife helps with proofreading.)

Over the years, he's included summaries on just about every topic in education, from expected education publications like the Chronicle of Higher Education and Education Next to the less obvious like Harvard Business Review and the London Daily Telegraph.

"One of my biggest takeaways from doing this is that the good stuff is widely spread, and so I've cast my net as widely as possible," he says of his varied reading list.

What hasn't varied much is his newsletter format: a pretty simple email with a Word attachment — no art, no fancy formatting, other than bolding the headlines and including hyperlinks to original sources and helpful research mentioned in the summaries. Subscribers can read it on a tablet or smartphone in HTML format and also listen to a podcast recording of the memo. Marshall encourages readers to copy and share individual pieces they read with coworkers and friends.

Now, more than 550 issues later, is the Marshall Memo what Marshall was looking for when he was a busy elementary school principal?

Without a doubt, he says. "I would have picked it up in a heartbeat."