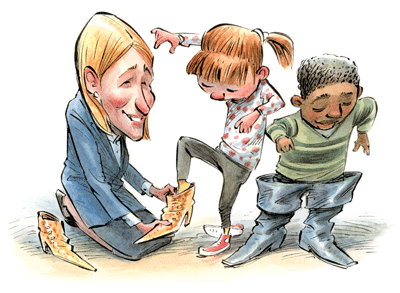 Has it gone by in a flash? The question is posed to Margot Stern Strom, C.A.S.’77, as she transitions — after nearly four decades — from president and CEO of Facing History and Ourselves to president emerita and senior scholar.

Stern Strom hesitates, thinking it over.

“I guess it hasn’t,” she says. Instead, Facing History, the education organization she founded when she was a young teacher, is more like a living library. “It continues. It advances.”

And it changes. What started in 1976 as one course on the Holocaust for K–8 students in one town has grown to reach 3 million students a year in more than 200 countries, with hundreds of staff members.

But the growth is clearly more than just rising numbers. As Stern Strom explains, after so many years, “we’ve been able to demonstrate what we said we were doing, in a full way,” in part because there’s a much better understanding of the complex issues Facing History explores with students and teachers — issues like racism, prejudice, hatred, difference, and anti-Semitism.

Still, for all of its growth, Facing History remains rooted in its original mission — to engage students in conversations about these issues in an effort to develop a more humane and informed citizenry. From the beginning, it has done that by helping students “walk in each other’s shoes,” Stern Strom says, and then helping them make that critical connection between what’s happened in history and moral choices they have to make in their own lives.

For example, during a unit on genocide in Darfur, teachers assign students in groups to learn more about six individuals who tried to help people in Darfur. Students are asked to think about and examine a time in their own lives when they cared about something so much that it motivated them to act above and beyond what they would normally do.

“It’s scary to walk in someone else’s shoes,” she says. “But you can imagine it if you’re taught about it. There’s a need for truth telling and widening perspectives.” As she said in a 2004 Compass magazine story, when asked if it was dangerous to raise volatile issues like genocide or lynchings with high schoolers, “The questions are complex; they’re not dangerous. It’s when you don’t raise them that the danger arises. The kids can handle the ambiguity.” We shouldn’t wait until young people are in college, she says, to raise these issues.

Stern Strom’s own exposure to these issues, particularly racism, started when she was young. Growing up in Memphis, Tennessee, in the 1950s, she walked past “colored only” water fountains, which she imagined flowed with jewel-colored water. Thursday was “colored day” at the local zoo. She was questioned one day for riding in a car with a black man, an employee at her parents’ furniture store.

“Racism was public,” she says. “What was hidden were the stories.” And not just the “bad” stories, but also the “good” ones about people trying to make change, like feminist and journalist Ida B. Wells, who moved to Memphis in the late 1880s and refused to give up her seat on a train — more than 70 years before Rosa Parks.

Guided by parents who taught her the meaning of social justice and to care for others, Stern Strom realized there was a “powerful silence” about race and racism. She started asking herself questions: Why weren’t teachers speaking out? Did anyone resist? Did anyone try to alter the biased school curriculum?

Now, as an adult, she says she’ll never know the answers to those questions, but does know that her teachers didn’t trust them with the complexities of history. “The dogmas were more secure, more comfortable,” she writes. “My classmates and I were betrayed by that silence. We should have been trusted to examine real history and its legacies of prejudice and discrimination and of resilience and courage.”

When she became a teacher in 1964, Stern Strom didn’t even trust herself to talk about the Holocaust, something she never learned about while getting her graduate degree in history.

“When I started teaching this, because I was both teaching it and learning about it at the same time, I sent the kids home with a film about the Warsaw Ghetto,” she says. “A mom asked me why I was sending home a film. ‘Don’t you trust yourself to teach?’ she asked. She told me I didn’t need to use the film.”

Over time, she gained her teaching voice and realized that young people — especially young people — need space to do what philosopher Hannah Arendt calls “thinking about thinking.” They need to be able to think alone, to have a dialogue with themselves in order to form their moral principles. But in order to really examine those principles and thoughts, they also need to talk about them with others.

“That discourse is what we create when we bring history and ethics together with teachers and students,” Stern Strom says. “The wrestling process produces something new in you. And it’s not just knowledge, but an understanding.”

These days, as Stern Strom moves forward in a different role at the organization she started, she’ll have more time to think about her own thinking. And she’ll continue to push so that more students are exposed to the kind of work being done at Facing History.

“My dream is that there will someday be so much support for this kind of education,” she says, “or else bigotry and hatred will continue.” Getting back to the initial question — has this all gone by too fast? — she adds to her original answer. “My son and daughter, both are my teachers,” she says, referring to Adam, who works at Facing History, and Rachel, a First Amendment lawyer. “I see this work being inherited by a new generation, so no, it hasn’t gone by too fast.”