All the News That's Fit to Read 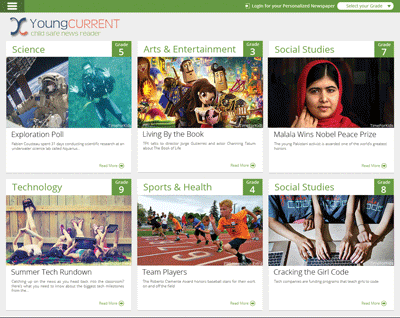 For Mydhili Bayyapunedi, Ed.M.’11, it didn’t make sense. While working at an afterschool program in Bangalore, India, she noticed that the students in higher grades weren’t very curious. “They didn’t ask as many questions as they should have,” she says. In contrast, a 10-year-old neighbor visited her every Friday night when the children’s edition of the local newspaper arrived, and the girl would ask lots of questions as they read it together.

“I could see that she was developing a great sense of curiosity and learning to ask the right questions,” Bayyapunedi says. The Technology, Innovation, and Education graduate decided to go online to see what other news sources for children she could find. Unfortunately, finding suitable content wasn’t easy — there wasn’t one site where stories appropriate for upper elementary to high school students were collected.

Inspired by her neighbor, Bayyapunedi decided to create an online project called YoungCurrent (@Young_Current) that aggregates news from around the web that is appropriate for children ages 8–16, customized to their interests and child-safe. This past fall, the project’s website launched, thanks in part to funding she received from Start-Up Chile. Start-Up Chile is a program created by the Chilean government that helps entrepreneurs from all over the world who have new, scalable business ideas but need a little help.

“They believe in you,” Bayyapunedi says of Start-Up, which provided her with mentors, some funding, and other resources in Santiago, Chile, where entrepreneurs live and work on their projects for six months. “They believe that you’ll be able to make a change.”

The goal is to eventually launch an app version of the project, based on the behavior patterns of the website users. Tailoring the experience to users is, in fact, a key feature of the project, Bayyapunedi says. This is not just a bunch of articles thrown together. Instead, Bayyapunedi and her editorial team hand-pick stories in several categories, such as science, social studies, and health, based on the user’s reading level (not just age) and reading patterns. This was critical, she says, when she tested an early version of the project with students and their parents. Initially she suspected parents would be apprehensive about letting their children read news online if it wasn’t appropriate — and they were — but parents also really wanted content that matched reading abilities.

“A child will read an article and notice highlighted words that he or she might not know,” she says. “He or she can tap the word to get a quick definition, building vocabulary and understanding. Research shows that this helps information stick better.” Eventually, students will also be able to tap key historical references in an article.

Over time, Bayyapunedi says, the system “gets smarter” and more tailored. For example, a student user may be given 15 articles to read with 25 highlighted words. The site will track which words the student stopped to read and how much time was spent on each article. It will note which articles were popular and how often the student clicked on repeated vocabulary words highlighted in other articles.

“We really want to understand how the child is learning,” she says. Free summary reports are provided to parents and teachers. Special reports, available for a fee, include tips on how to expand the learning for a particular student.

While she is in Chile, Bayyapunedi is not only fine-tuning the current version of the site, but also starting a Spanish version.