A large majority of youth appear to prioritize aspects of success — achievement and happiness — above caring for others.

This is one highlight of a report released in June by the Ed School’s Making Caring Common Project (@MCCHarvardEd). The report is based chiefly on a survey of nearly 10,000 diverse middle and high school students that the project conducted in 2013. The report also points to a troubling gap between what adults say and what students perceive about the importance of caring, kindness, and respect: Adults claim to prioritize caring, but that’s not the message that teens are hearing. 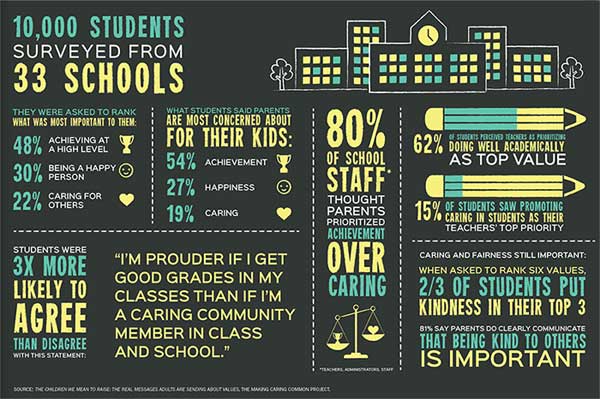 According to the report, a majority of teens view their parents as more concerned about their children’s achievements than about their being caring people. A majority also report valuing, and perceive their parents and peers as valuing, aspects of their effort such as “working hard” over moral characteristics such as fairness. Similarly, while teachers report that developing students’ capacity for care is more important than their achievements, youth are much more likely to view their teachers as valuing their achievement over their caring. The report also notes important race, class, and culture differences in the findings.

“Our founding fathers envisioned a society that balanced success and happiness with the common good,” says Rick Weissbourd, Ed.D.’87, codirector of the project and a senior lecturer at the Ed School. “We now seem to have lost that balance. And the irony is that the intense focus on happiness doesn’t appear to be making children happier.”

Weissbourd said the good news is that the survey clearly shows that caring is still valued by the students they surveyed.

“Our challenge is to help parents and educators show that they prioritize caring and goodness and give our youth an opportunity to build their moral muscles,” Weissbourd says. “We’ve drawn on our knowledge of moral development and social emotional learning to develop clear strategies designed to do just that.”

Some of the strategies the report suggests include conducting a survey of the school climate, cultivating student leadership to address troubling aspects of the school’s climate, building student’s capacity for empathy and self-regulation and their commitment to the common good, and ensuring that all students have a positive relationship with an adult mentor.  — Mark Russell is the project’s media and programming director.