Give Math a Shot

Over the course of the past few years, mobile game apps have become extremely popular among smartphone users. 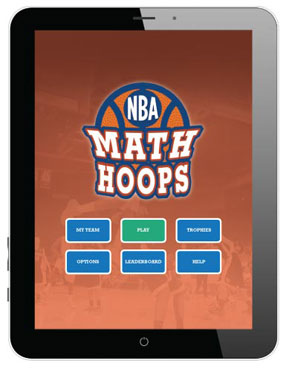 They are often free to download, fun to play, and addictive. But what if they could be educational as well? That is the idea behind NBA Math Hoops, inspired by a board game developed in 1997 and recently launched as an app by the nonprofit Learn Fresh, where Nick Monzi, Ed.M.’13, is the director of programs.

Created in 2013, NBA Math Hoops allows users to build a team of NBA and WNBA players, says Monzi, and then use these players to compete in a math-driven basketball game. Students start with very basic addition problems and advance through 10 levels. If students answer questions correctly, their players can take shots.

“The app is best described as a more straightforward and simplified version of the board game, with the main intention being to divert students from Angry Birds and Candy Crush during their out-of-school time,” Monzi says.