When doctoral student Maung Nyeu, Ed.M.’13, was in the first grade, living in the remote Chittagong Hill Tracts region of Bangladesh, he dropped out of school. He says he couldn’t understand anything the teachers were saying — they taught in Bengla, the official language of the country since 1971. His family spoke Marma, one of eight different indigenous languages used by Hill Tract tribes. As a result, Nyeu was constantly being punished — hands out, palms up, a teacher with a wooden stick. He begged his parents to let him stay home. Eventually they agreed, but with one condition: He still had to study. 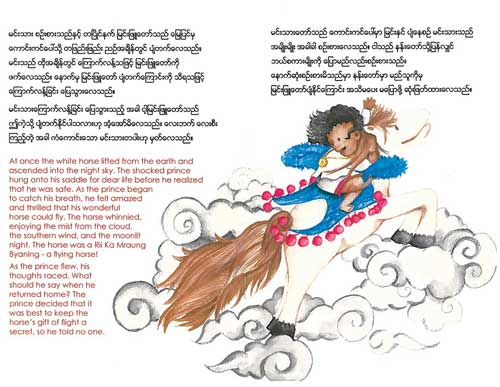 “My mother realized I was struggling with the language, so while she cooked, I would stand next to her and she taught me Bengla,” Nyeu says. Four years later, he was fluent and went back to school.

Unfortunately, even today, Nyeu’s struggles are all too common for other Hill Tract students, who continue to drop out because of the language gap. By second grade, 35 percent will drop out; that number jumps to 65 percent by the fifth grade. Only about 1.5 percent of children in the Hill Tracts go beyond the 10th grade.

“Bengla works for the majority of the Bangladesh people, but it’s a huge struggle for children in the Chittagong Hill Tracts,” Nyeu says. And it’s not only the language that creates a barrier to learning. “When children pick up their textbooks, there’s no local context. The pictures and stories are from communities far away.

What they see and read is not what they know from their lives. Children end up with rote learning. They lose confidence and quit.”

Nyeu decided to do something about it: He would collect local stories and have them printed, in books, in the local languages.

“When our grandparents were younger, there wasn’t one official language. Teachers taught in our language, so earlier generations could speak the native languages, but also read and write them,” he says. “The same books — I cannot read them. The current generation — they cannot read them. These books are on the brink of extinction.”

He started the Oral History Project by asking the students at the primary school he started a few years ago on the grounds of a Buddhist temple to interview their grandparents and village elders when they went home on breaks.

“We said, ask them to tell you about the games they played when they were little or what their village was like,” Nyeu says. Many ended up telling traditional tales that had been passed down hundreds of years. Back at school, the children shared the stories in front of their classmates, in three of the local languages: Mro, Marma, and Chakma. The sharing was videotaped and the tapes mailed to Nyeu in Cambridge to transcribe. With the help of a few Ed School writer and artist friends, as well as a graduate student at Cambridge University who created brand new digital fonts for the local languages, Nyeu started turning the stories into children’s books. Of the 70 stories collected, four books have been published in English as well as the local languages. Nyeu plans on publishing about six more before the year is over.

“When the children see their stories in a book, they are so excited,” Nyeu says. “When a child sees himself or herself as a cocreator of knowledge, it affects their perception of school. The books also show them that what they bring from their villages, from their families, is valuable to their education.”

How You Can Help