When one of Fawn Qiu’s favorite mobile games was discontinued earlier this year, she did the only logical thing for a 2012 graduate of the Technology, Innovation, and Education Program: She recreated it, in a cardboard container.

The motorized, real-life paper game, called Flappy Box, comes with two controls that let the user move the red bird up and down to avoid green pipes. If the bird hits the paper pipes, the lid of the box closes. This past spring, Qiu promoted the game through a DIY Kickstarter kit with an added bonus: For every $5,000 she raised, she would put together a free programming and engineering workshop for underserved, female high school students in New York City, where she is based. Qui, Ed.M.’12, spoke to Ed. about the project. 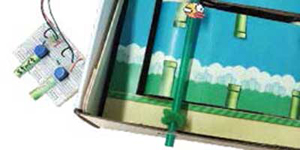 To make electronics projects more relevant and exciting, especially to girls and minorities.

Number of pieces in a Flappy Box kit: 20

# days it took you to create the original kit: 3

Longest anyone has been able to play Flappy Box without the lid closing: 25 minutes

Project MakeAnything
I started Project MakeAnything when I was at HGSE. I noticed many minorities and girls were less interested in traditional robotics classes. I wanted to design a new approach for people of all technology background to engage with STEM topics. My hope is to empower students in STEM topics through creative kits and workshops. Several HGSE students and I taught classes using our kits in a middle school.