The App Age and Creativity 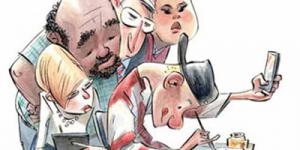 For adolescents growing up in the digital age, there is good news and bad news.

The good news? Researchers who analyzed hundreds of pieces of art by high schoolers found exceptional examples of creative output that exceeded those found in works produced by teenagers 20 years prior.

The bad news? In the same time span, creativity in writing by high school students has all but disappeared, with fantasy-based tales replaced by formulaic essays filled with informal language.

For doctoral candidate Emily Weinstein, Ed.M.’14 — the lead writer of “A Decline in Creativity? It Depends on the Domain,” published in January’s Creativity Research Journal — the vast difference between the stories produced by high school students between 1990 and 1995 and between 2006 and 2011 was remarkable.

“This was not even a questionable finding,” she says. More of the stories written in the first time period they studied stayed with the reader. For example, she says one piece was about a psychiatrist who is a crab. “Compare that to today’s more narrative, totally realistic essays, and it is even more striking. … There is a lot of realistic and self-centered writing that pervades adolescent daily life now. Also, as we teach kids to write well on standardized tests, there is a formulaic way to score well. … We wonder if there is a lot of time in class helping kids to write well for a particular structure.”

Weinstein, along with University of Washington Assistant Professor Katie Davis, Ed.M.’02, Ed.M.’09, Ed.D.’11; Zachary Clark, Ed.M.’12; and Donna DiBartolomeo, Ed.M.’12, reviewed more than 350 pieces of artwork from a monthly magazine for teens and 50 fiction writing samples produced by high school students from a similar publication. In both genres studied, the researchers were able to sample works compiled by the same writing teacher and the same art journal editors, for the time periods reviewed.

The research, which is also documented in a chapter in The App Generation: How Today’s Youth Navigate Identity, Intimacy, and Imagination in a Digital World by Davis and Professor Howard Gardner, was part of Project Zero’s Developing Minds and Digital Media Project.

According to Davis, “We wanted to explore how young people today are different from 20 years ago and what changes we could relate to digital media.”

Although creativity in writing had lessened, the results for visual arts were more promising, with observed works demonstrating “more complexity” in design and subject matter, Davis says. In this area, digital media could be having a positive effect on creativity. “The Internet exposes us all to more visual media than ever before, and you don’t have to go to the Louvre in Paris or other places around the world to see this art.”

Overall, she and Weinstein both say that more research is needed to draw specific conclusions about the impact of digital media — and standardized testing — on creativity and the willingness by students to take risks and break away from the standard mold.

“I would hope policymakers and schools administrators would see this work and ask whether how we construct the school day supports 21st-century skills and risk taking,” Davis says. “I think the answer, to a large extent, is no.” Is It Better to Ask Questions or Listen Carefully?