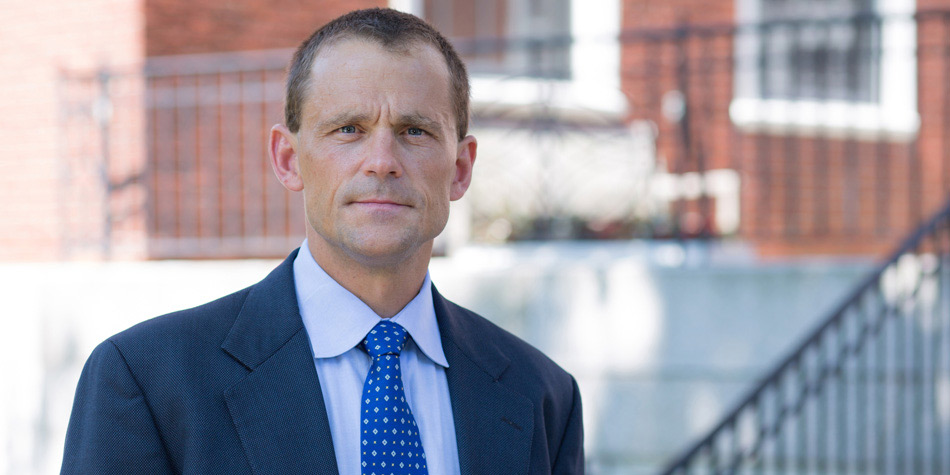 The first 100 days. Coined in 1933 by President Franklin D. Roosevelt, it's a term usually reserved for a newly elected president, a way to look at the first few months of the commander in chief's administration. What about our new commander in chief, James Ryan? Last September, Ryan officially started as dean at the Ed School after teaching law for 15 years at the University of Virginia. As he approached his first 100 days in Longfellow's corner office, Ryan spoke with Ed. about what he has been learning, what has surprised him about the school, and, perhaps most importantly, how this New Jersey native is dealing with being a Yankees fan in Red Sox Nation.

What has impressed you the most about what's happening at the school? The strong sense of mission that faculty, students, and staff all share. It really is palpable. Everyone here is committed to improving education, whether through research or practice. That has been not only impressive, but also inspiring.

What's the most surprising thing you've learned so far? I have been surprised by how many individuals and institutions are interested in partnering with the Ed School. Nearly every day, I get emails or phone calls suggesting some kind of joint venture, a number of which are genuinely intriguing and promising. In some ways, the offers to partner are symbolic of the general challenge facing the Ed School. It is not coming up with good ideas; those abound. It's figuring which of the host of good ideas makes the most sense for us, an institution that is committed to having a genuine and significant impact on the field.

How can the school really increase the connection between research, policy, and practice? I think there are a number of ways, many of which are already being pursued. I will just cite three examples. One is through partnerships with schools and school systems. Another is through greater efforts to disseminate the amazing research being conducted here, so that it gets into the hands of those in the field and in a manner that is most useful to them. The third has to do with the way we train students and ensure that students who are going into practice or into policymaking positions understand the importance of research and the real value of basing decisions and policy on solid evidence.

What is the biggest difference between working at a law school and an education school? There are actually more similarities than I would have thought, as both law schools and education schools — like all professional schools within a research university — strive to hit the right balance between a connection to the arts and sciences and a connection to the field. That is a constant discussion, and it ought to be. The biggest difference is the sense of mission I described earlier. Even though education schools are as interdisciplinary as law schools, if not more so, there is more of a shared sense of mission working at an ed school.

Do you miss teaching? Very much so. Luckily, I've had the opportunity to guest lecture in some classes here and in a class at the law school. I plan to continue that this year and hopefully get back to teaching a full class next year.

Does it feel odd to be called "dean?" It did feel odd, until I started insisting that my kids also call me dean, so now it feels pretty normal. I am kidding. It is definitely a bit strange, which is one of the reasons why I have been insisting, except to my kids, that people call me Jim.

As a Yankees fan living here now, what was it like watching the Red Sox win the World Series? I was happy for Red Sox fans, including my wife, Katie, who is a lifelong Sox fan. As I've told many people, and this is the truth, the Red Sox are my second favorite team, so given that the Yankees were not in the series, I was happy to root for the Red Sox. I will say that one heartening discovery I have had is how many Yankees fans there are at the Ed School! After I sent an email encouraging everyone at the school to wear their Red Sox gear going into the last game of the World Series, I got a dozen emails from people saying, "I'm so glad to hear you're a Yankees fan, too!"