The leading sociologist, champion for equity, and longtime HGSE faculty member passed away on January 11.
By Jill Anderson
January 14, 2022 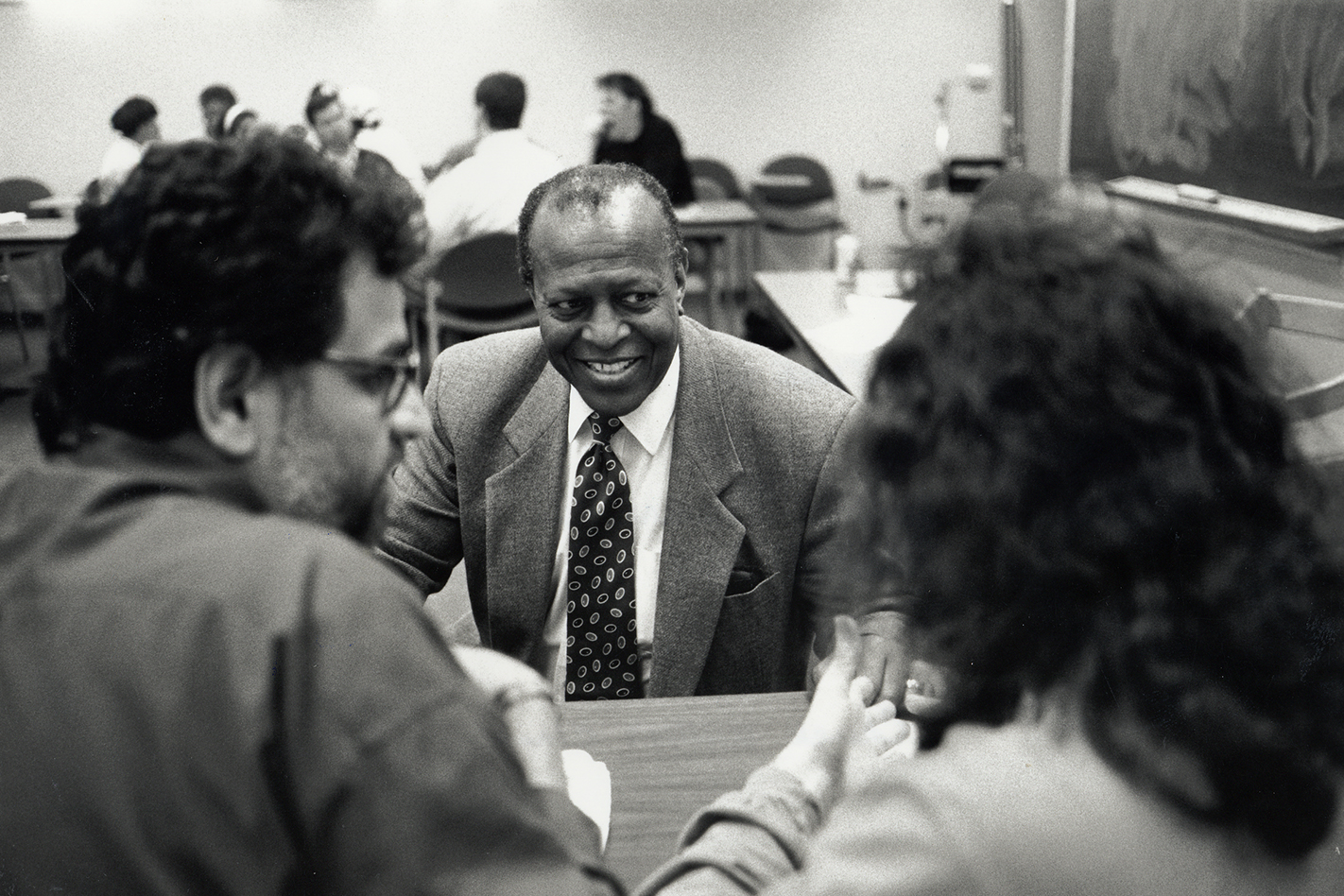 Harvard Graduate School of Education is celebrating the life and work of renowned faculty member Charles “Chuck” Willie, who died on Tuesday at the age of 94. A leading sociologist and well-known activist, he leaves a remarkable trail from academia to the real world working to end segregation and advance opportunity for students, families, and communities.

Willie became a mentor to the many he crossed paths with during his four decades at HGSE, where he’s remembered for his engaging courses, kindness, and a lifelong commitment to equity and inclusion.

"I had so much admiration for Chuck, and as a young faculty member, I benefited greatly from his support and encouragement," said HGSE Dean Bridget Long. "He truly was a bright and shining light for all he encountered — a trailblazing scholar adept at using his research for the benefit of countless schoolchildren, and a deeply kind person who helped to develop generations of students after him."

Prior to joining HGSE in 1974, as a full professor with tenure, Willie was already one of the foremost sociologists of his generation and a path-breaking educator, academic leader, and activist. He became the first African American professor at Syracuse University, where he taught for 24 years, eventually becoming chairman of the Department of Sociology and vice president of student affairs at the university.

He was a graduate of Morehouse College, where he was elected class president and where he also befriended classmate Martin Luther King Jr. They would go on to become leaders and support one another during the Civil Rights era.

Willie also forged his own path as an advocate for equity and inclusion. Just a year after joining HGSE, he served with former Dean Francis Keppel as a court-appointed master to read proposals in Boston’s contentious school busing case and then make recommendations for a final plan to desegregate the city’s schools. “What we were trying to do is bring justice back into the situation, despite the raw nerves that people had during that time,” Willie told the Harvard EdCast in 2011. “And I think that it worked well because it was fair to everyone. Not many people knew it, but that plan, which we prepared for Boston, that plan stayed in effect for about 10 years.”

With a growing reputation for his work in school desegregation — including the Controlled Choice plan that was implemented in Boston and Cambridge — he later served as a consultant and expert witness in major school desegregation cases in cities such as Denver, Houston, Kansas City, Little Rock, and St. Louis.

“You can look around the country at institutions and districts that have successfully navigated the desegregation era, and so many attribute that to the work of Chuck Willie,” said Morgan State University President David Wilson, Ed.M.'84, Ed.D.'87, noting the unique impact that Willie had as a scholar who was truly able to reach practitioners.

Willie identified as an applied sociologist who was concerned with solving social problems. Thus, his work often focused on issues pertaining to race, gender, socioeconomic status, mental health, religion, education, urban communities, and families. That work led to appointments by President John F. Kennedy to focus on juvenile delinquency and youth crime, and later by President Jimmy Carter to the President's Commission on Mental Health. Well-respected by colleagues across his field, Willie was a member of the Board of Directors of the Social Science Research Council, and also served as vice president of the American Sociological Association and president of the Eastern Sociological Society.

But it was Willie’s work as a faculty member — one who committed deeply to his students and took great care and concern in their scholarship and their lives — that lives on powerfully today.

“Dr. Willie was a proud Morehouse graduate who brought the tradition of Black academic excellence to his scholarship and teaching,” said Senior Lecturer Karen Mapp, Ed.M.’93, Ed.D.’99. “Dr. Willie expected the absolute best from all of his ‘scholars.’ I was fortunate to have had Dr. Willie as my faculty adviser and chair of my dissertation committee. He guided my scholarship journey with a critical eye, an open mind, and generous heart.”

David Wilson arrived as a doctoral student at HGSE in 1982. He noted that at the time, it was quite rare to find a full-tenured Black professor at Harvard who had also gone to a Black college. “He adopted all of us,” Wilson said, “to the point that he would have to throw us out of his office after class because we were all there arguing with him. He just opened himself to us. He listened and challenged us to produce the research or find the research to support our arguments.”

Before Richard Reddick, Ed.M.’98, Ed.D.’08, enrolled at the Ed School, he recalled coming across Willie’s work and recognizing how their interests in racial equity, diversity, and school integration overlapped.

Once Reddick arrived at HGSE in the summer of 1997, Willie was one of the first faculty members he connected with after bumping into him at Gutman Library. They had plenty in common — both being from Texas and brothers of the same fraternity, Alpha Phi Alpha — which led to a year full of conversations, critiques of writing and scholarship, and what Reddick describes as an “affection in his direction to read a certain article, or make a point clearer.”

“What I didn’t anticipate was the love that Chuck and his wife, Mary Sue, had for his ‘scholars’ — you were never a student, but a ‘scholar.’ From dinners at their home in Concord, to Morehouse Glee Club concerts in Copley Square, to postcards over the years, to writing retreats in their study, to hosting a very fussy eight-month-old at their home during Commencement, the Willies made space for me, my wife, my parents, and eventually my oldest child in their family. And this was something that they did for so many of us over the years,” said Reddick, now the associate dean for equity, community engagement, and outreach at the University of Texas at Austin's College of Education.

Beyond the commitment Willie had to developing “scholars,” he published an astonishing amount of work — having authored and edited over 100 articles and 30 books, including Controlled Choice: A New Approach to Desegregated Education and School Improvement with Michael Alves, his co-author of the Controlled Choice plan, and A New Look at Black Families with Reddick.

Following his retirement in 1999, Willie continued to teach the course Community Power, Decision Making and Education, which covered grass-roots action to solve community problems (especially educational issues), for another 10 years.

Over the years, he received many honors, including the American Sociological Association's William Foote Whyte Distinguished Career Award and the W.E.B. Du Bois Career of Distinguished Scholarship Award, and earned 12 honorary degrees over his lifetime. One of those honorary degrees — given in 2013 by Wilson as president of Morgan State University  — represented a full circle moment, where they recognized the power of how his support did what it was “designed to do” and lift each other up. “We locked eyes and there was a tear lapping down his chin…. Chuck played a powerful role in molding me to become a president,” Wilson said.

In 2021, Dean Long formally recognized Willie’s work by renaming a Doctor of Education Leadership fellowship as the Dr. Charles Willie Fellowship. The fellowship provides an Ed.L.D. student with financial support during their three-year doctoral program.

It's another example of how, through Willie’s support and mentorship, his “favorite scholars” are well supported to continue the work that was so important to him throughout his long career. Willie's inspiration will continue, even as his passing signals a deep loss. As Mapp said, “We have lost yet another warrior for social justice, democracy, and equity for all.”