This past May, Zeke Phillips, Ed.M.'06 — a founding teacher at three Excel Academy schools in Massachusetts — was announced as a winner of the Fishman Prize for Superlative Classroom Teaching.
By Michelle Choate
October 5, 2015 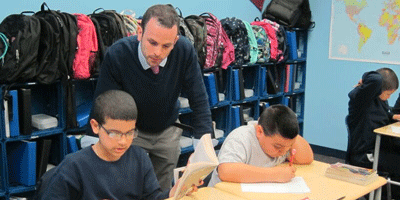 Zeke Phillips, Ed.M.'06, put in his application for TNTP’s Fishman Prize for Superlative Classroom Practice with no thoughts at all of winning. The Fishman, which is awarded annually to exceptionally effective teachers working in high-poverty public schools, has a long and rigorous application process that gradually winnows down hundreds of applicants to four winners. Phillips thought the process itself — which included a teaching video, classroom visit, and in-person interview — could mark his growth as a teacher and also serve as a tribute to his students.

"I love to teach and have had the good fortune of being surrounded by great people over the years who have helped me grow," says Phillips. “I believe that the extent to which I have been successful is really due to them."

This past May, to his great surprise, Phillips was announced as a winner of the Fishman Prize — which comes with $25,000 and an intensive summer residency with educators from across the nation — at a ceremony held in his classroom at Excel Academy–Chelsea in Chelsea, Massachusetts, one of three schools that he has helped found.

"There are so many great teachers out there, so many great teachers at my school specifically, that I never expected this to happen. And now that it's happened, there’s still a sense of disbelief," says Phillips. “At the moment I won, I felt a big sense of humility and gratitude, knowing that there are so many people that helped get me to this point.”

In his fifth-grade classroom at Excel Academy–Chelsea — a school that serves predominantly low-income Latino students — Phillips’ impact was profound. Last year his class began the year with a Development Reading Assessment Average of a grade 3.5 reading level. By the end of the academic year, those same students were reading at an average level of 5.1 years, meaning they had accomplished a year and a half’s worth of development in under a year.

Touted by his colleagues during the Fishman process as “a classroom craftsman,” Phillips also strives to be involved with his students beyond the classroom; he both ran the school newspaper and coached the cross-country team at Excel Academy–Chelsea. Extracurricular activities, he says, are opportunities for students — as well as their teacher — to learn about the world and themselves.

“They are additional platforms for students to grow and express themselves,” says Phillips. “But through extracurricular activities, I’ve also learned a great deal about teaching, particularly through the more informal moments. They are a lab for innovation and learning for a teacher.”

Phillips credits his time at HGSE in the Teacher Education Program as having helped him to gain the foundational tools and approaches that help establish and sustain a long teaching career.

“Harvard taught me what it takes to create a good school,” he says. “It also taught me a lot about relationship-building and thinking critically about issues surrounding race, class, and education. I feel indebted to Harvard for helping me establish the foundation I was looking for, and for the building blocks that I continue to reference to this day.”

This fall, Phillips made the transition to Excel Academy’s new high school, where he is a founding ninth-grade English teacher and instructional leader. When the opportunity came up to execute a shared vision for a robust high school educational experience, Phillips jumped at the chance.

“There’s nothing more exciting than having a blank slate and a group of committed people coming together to create something that’s never been done before, building on best practices and making them better,” he says. Answering the Need for Substitute Teachers Creating a Culture of Success — for All College Students