The Benefit of Interactive Learning

Watch a video of the Master Class with Eric Mazur. 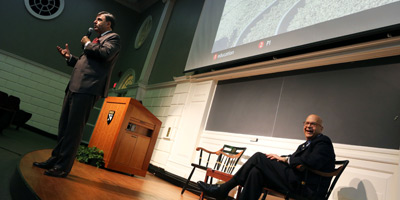 Eric Mazur, Balkanski Professor of Physics and Applied Physics at the Harvard School of Engineering and Applied Sciences, knows all too well that a lecture on physics could put most people in a classroom to sleep. It is something that he learned the hard way.

As part of Master Class, a series that began at the Ed School a year ago as an opportunity to celebrate and investigate great teaching happening throughout Harvard University,  Mazur's session, "Confessions of a Converted Lecturer," explored how he developed and practices peer instruction — a method for teaching large lecture classes interactively.

“Active learning, not passive [learning] makes it impossible to sleep through a class,” Mazur said.

Mazur — the son of two teachers — told that audience that he never planned on teaching. “I knew I was going to do something useful,” he quipped. But, when he arrived at Harvard University as a postdoctoral fellow, he began teaching physics. He noticed quickly that, despite giving him high ratings on course evaluations, students often wrote, “I hate physics” or “Physics sucks.”

Mazur shared a photograph of his early days teaching, in which he was shown hunched over a projector, disengaged from the students. The students looked equally unengaged with the lesson. Describing the scene as a “transfer of information,” he noted that there was a “lack of learning and retention” from his lectures.

By the seventh year of teaching, Mazur was forced to admit that his students weren’t grasping the concepts he was presenting to them. In a moment of despair, he told students to discuss a question he had posed with one another. Within two minutes, they had figured out the answer. That pivotal moment made him realize what needed to change was his teaching. From then on, he began experimenting with more active learning styles where students engaged with one another to help find the answers. His interactive teaching method has gone on to earn a large following internationally and nationally.

As a brief demonstration, Mazur posed a multiple choice question to the Master Class audience. Using a handheld polling mechanism, he asked the crowd to select an answer. Then, he encouraged the audience to talk with a neighbor who had selected a different response and attempt to persuade their classmate to change his or her answer. After several minutes of discussion, Mazur asked the audience to once again answer via the polling mechanism. By the time Mazur revealed the right answer to the question, he noted that he had the attention of everyone in the room.

The process, Mazur explains, sets up students to commit to an answer, then move to the reasoning behind it. From there, he said, through the discussion with their peers, the students often become emotionally invested in the learning.

“What I was able to show is that I doubled the learning gains. In fact, it tripled once I got better questions to ask in class and also much longer retention,” Mazur said. “I’ve never looked back.”

HGSE Professor Richard Light, discussant at the Master Class session, asked Mazur whether this type of teaching could translate into the K–12 classroom.

“If you walked into this classroom 10 minutes ago, while you were talking to each other and observed the chaos, it would not be that different than the chaos in a kindergarten classroom…,” said Mazur, who’s peer instruction network includes some K–12 schools. “I’m trying to turn my class into a kindergarten because small kids take ownership of their learning; they do that automatically. Then, somehow, as kids progress, by the time they are in middle school, they no longer take that ownership of learning. I’m trying to bring that back into the classroom.” The Harvard Medical School professor will deliver "Using the Flipped Classroom to Teach Thinking Skills: What You Should Know about Breathing for the 4th of July Barbeque" on Monday, April 11 at noon. On Tuesday, October 6, Professor Elisa New gave the first Master Class of the semester titled “The Lecture/Discussion as Teaching Genre: Looking (and Loafing) with Whitman.”