On September 19, the Harvard Graduate School of Education launched its $250 million fundraising campaign with the event “Critical Conversations and Bold Ideas,” which attracted 1,200 attendants.

Addressing the crowd, Dean James Ryan spoke about spending the past year, with the help of colleagues, thinking about the school’s mission and developing three strategies to improve education: cultivating leaders and innovators, collaborating on questions that matter, and communicating with the field, which he explained were also the school’s campaign priorities.

“Together, these three strategic priorities, our three Cs, are the way we hope to leverage what we do here on campus in order to make a genuine difference in the world,” he said. (For more information about the Campaign and its goals, please visit www.gse.harvard.edu/campaign.)

“This community believes that every child deserves a high-quality education and that this is a basic and universal human right,” Ryan said, describing how HGSE is the “right place, at the right time” to meet current challenges in education and change the world.

“HGSE is the right place because we have, over the course of nearly a century, prepared students for careers that have touched and transformed the lives of millions of children and young adults,” he said. “We have generated ideas and research that have altered the landscape of teaching and learning. And we have helped reform both practice and policy.”

“This community believes that every child deserves a high-quality education and that this is a basic and universal human right.” Dean James Ryan

Ryan observed that this is the right time because “we are witnessing a unique confluence of opportunity and interest. We have tools previously unavailable to any generation, whose potential has not yet been realized, or even fully understood …. [and] there is a groundswell of interest and a sense of urgency around the globe.”

This interest and urgency infused the daylong event, which featured a plethora of discussions, including five concurrent breakout panel sessions where faculty and alumni covered topics ranging from early learning and the brain to the need for leaders in education to global education in the 21st century. There were also many high-profile speakers, including U.S. Secretary of Education Arne Duncan; Harlem Children Zone CEO Geoffrey Canada, Ed.M’75; and Harvard University President Drew Faust, as well as musical performances by Yo-Yo Ma, students from Conservatory Lab Charter School, and Familiarevolution featuring Janelle Bechdol, Ed.M’14. (View a photo slideshow of the event.)

During the opening session, Duncan asked HGSE to think about the difference its work makes and will make in the future. He had three specific requests of HGSE: design a teacher prep program that considers rigor, outcomes, and diversity; make sure research is useful; and consider the needs of superintendents

Duncan spoke extensively about a need to close the “opportunity gap” in America and shared frustration with the nation’s inability to put politics aside when thinking about education. “We have to get past ourselves and do what’s right for kids,” he said.

Additionally, Duncan repeatedly called attention to the nation’s disinterest in funding education initiatives as opposed to financially supporting incarceration, which he noted was higher than any other country in the world. 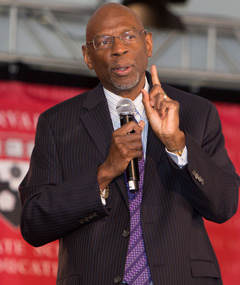 The latter issue resonated with Canada, who delivered the keynote address. He shared a similar disbelief in Americans continually questioning investments in children and education versus the juvenile justice system. “The only chance we have to make a good life is to get an education,” Canada said, noting that what is currently being done in education isn’t a reasonable enough solution.

During his talk, Canada shared his personal journey into the education field. Despite college professors advising him to become a doctor, Canada stayed with education and noted that HGSE changed his life and opened doors. However, Canada expressed exasperation at how the public has continued not to see education as the key to the future.

“It’s stunning that when I left here, we had answers but we still haven’t done it,” Canada said. “It is decades later and I’m still struck that people deny there is a science to what we do.” 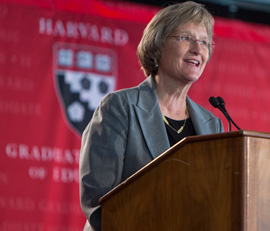 Later in the day, Faust reflected on the Ed School’s founding in 1920 and how the founders grappled with the school’s purpose as they constantly explored ways to find what works in education, how to improve the profession of teaching, and, ultimately how to change the world. Faust concluded that HGSE had successfully done all of these things.

“It is not the most well-resourced school, but we are here today to change that,” Faust said, noting that in her mind, the school may actually be the “grittiest place” at the university. “GSE has always found a way.”

Ryan’s speech echoed Faust’s words about the ability of school to effect great change. “If not us, who?” he asked. “If you believe education in this country and around the world needs improvement, perhaps dramatic improvement, who else is in a better position to make that happen? What other institution or organization has the range, the reach, the access to world-class talent, and the independence needed to make a real difference? Who else is located in the finest research university in the world, with leaders like President Drew Faust, Provost Alan Garber, and my fellow deans, all of whom are as passionate as we are about education?”

“We are at a turning point in the history of education, and our goal is to bend that history toward greater opportunities and outcomes for all,” Ryan said. “I am completely convinced … that we can become the very brightest beacon in the sometimes foggy world of education.”