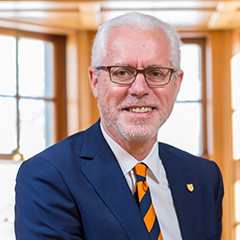 Brian Rosenberg, the current president-in-residence at the Harvard Graduate School of Education, is an American academic administrator and a scholar on Charles Dickens. Rosenberg received his B.A. from Cornell University and his M.A. and Ph.D. in English from Columbia University. He has published numerous articles on Dickens and other subjects as well as two books. Rosenberg began his academic career as an adjunct assistant professor of humanities at the Cooper Union in New York City in 1982. He worked at Allegheny College in Meadville, Pennsylvania, from 1983 to 1998 as an English professor and as chair of the English Department and participated in the development of the college’s strategic plan. From 1998 to 2003, Rosenberg was dean of the faculty and an English professor at Lawrence University in Appleton, Wisconsin. While in this position, he was responsible for all academic programs, athletics, the library, instructional technology, and the Lawrence University art gallery. He directed the design and passage of the university’s first new general education requirements in 15 years, created the college’s first mentoring program for new faculty, and wrote the long-range faculty staffing plan. Rosenberg became the 16th president of Macalester College in August 2003. He led a number of fundraising campaigns for the college, such as the Macalester Moment campaign, and oversaw the construction and renovation of several buildings on campus. Rosenberg is very interested in the politics of higher education and has written many articles on the subject.

News Stories
Marcy, Rosenberg to Serve as 2021-22 Presidents in Residence