Can a state’s takeover of an entire school district improve student achievement? Can that improvement be sustainable? And most important, can that takeover model be applied in other districts?

In 2012, after years of worsening test scores and abysmal graduation rates, the Lawrence Public Schools system was taken over by the state of Massachusetts — and the answer to all three of those questions later turned out to be “yes.”

“Lawrence is a rare example of a district-wide turnaround effort that has led to some positive results,” says Beth Schueler, a Harvard Graduate School of Education doctoral student who has analyzed the Lawrence takeover in detail. “I think it’s an exciting proof point, because the examples of positive turnaround efforts are so few and far between.”

Schueler and her coauthors, HGSE Associate Professor David Deming and Harvard Kennedy School Associate Professor Joshua Goodman, describe the success of the Lawrence project in a new working paper that may serve as a blueprint for other districts and states. In a conversation recorded for the Harvard EdCast, Schueler and Deming discussed the lessons of the Lawrence takeover.

By extending learning time, concentrating on school leadership, and giving many schools greater autonomy, the district made noticeable gains in reading scores and significant gains in math scores. By far, the most identifiably effective measure was the addition of “acceleration academies,” in which at-risk students were invited to spend a week during school vacation in an intensive math or reading seminar.

But the accomplishments of the Lawrence case go beyond increased test scores. Schueler and Deming note that certain aspects of the takeover suggest that its successes will continue after the state cedes control back to the town, making it a sustainable model.

For example, in many school takeovers, states begin their reform by replacing a huge proportion of the teachers. But in Lawrence, explains Schueler, the state “only actively replaced between 8 to 10 percent of teachers,” with about 20 percent more of the teaching population changing over due to resignations and retirements. The state instead “took a more aggressive approach to school leadership,” replacing about half of the district’s principals. 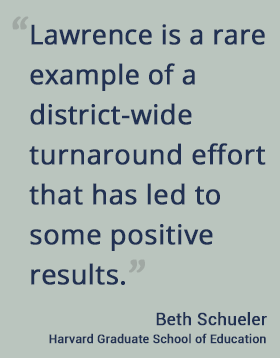 Also notable, Schueler says, is that Lawrence didn’t view the takeover as a sign of failure or a complete loss of control. “Local elected officials in Lawrence publicly welcomed the state takeover, and that’s different than other turnaround cases we can point to,” she says. This peaceful transition may indicate an easier shift in several years when the town regains autonomy over its schools.

Deming emphasizes that few district takeovers have happened the way Lawrence’s did, and the model it offers may prompt policy changes elsewhere.

“Most studies of district turnarounds are places like New Orleans, where the district or the schools were in this really extreme state, but this is the first recent example of a turnaround just coming out of policy,” says Deming. “We have policy enshrined in Massachusetts law that specifies that when a district repeatedly fails to meet benchmarks, it cedes more and more control to the state, culminating in level 5, which is the takeover. You can imagine other states following this model. And you could imagine turnaround as a policy, not just as an exceptional thing. I think that’s really the most important thing to focus on.”