Hand-wringing about young people’s participation in politics and civic life is common, particularly in an election season. But civics scholar Helen Haste, a visiting professor at the Harvard Graduate School of Education, isn’t seeing things quite so bleakly.

Usable Knowledge sat down with Haste to talk about new forms of civic participation, a new lens on democracy, and a new brand of civic education. What follows is an excerpt from that conversation.

How is the notion of civic participation changing?

We’re seeing an explosion of different ways of thinking about civic participation amongst everybody, but particularly amongst the young. And this is changing how we think about politics, it’s changing how we think about democracy. It’s certainly changing how we define participation in the civic domain. And it has enormous implications for education, because if we’re thinking differently about what a good citizen is, an effective citizen, then we obviously have to think differently about how we produce them. This is being called the "new civics."

This partly arose because of a sort of moral panic in the last few years in a number of countries that young people aren’t voting. Young people aren’t voting in the numbers we would like to vote, in national elections, in local elections, and a lot of people became worried that if people don’t vote, this undermines democracy. So the first question to that is, “How do we make young people vote?” And then a second question is, “If we look carefully about this, is it really the problem we think it is?”

So what have you concluded about how young people participate, civically and politically? 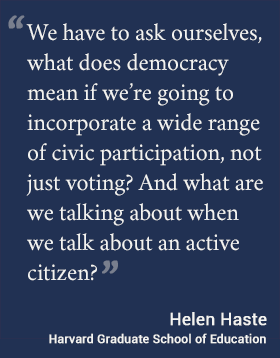 When you actually look at young people’s participation, you find that a very large number of them, probably around half, are involved in some kind of civic participation. Obvious things are volunteering to help the community, particularly the vulnerable, or working to protect the environment.

Young people also get involved in campaigning actively at the local level or for single, larger issues — activities which often have a strongly moral dimension, like protesting against acts of racial injustice.

What young people are not interested in is party politics.

If we ask young people whether they are interested in politics, about three percent say yes. And then we realize they’re talking about political parties. If we then ask about the other things I just listed, they say, “Yes of course I am supporting an environmental group, or yes of course I’m volunteering on Saturday.” And that’s when civic participation goes up from 3 percent to 50 percent. And so that whole picture changes.

So participation does not have to equal voting, at least as a metric.

We have to ask ourselves, what does democracy mean if we’re going to incorporate a wide range of civic participation, not just voting? And what are we talking about when we talk about an active citizen?

It’s going to first of all change how we think about the democratic process. If we define democracy purely in terms of representative government, people voting for it, and the development of laws within that system, then we have a very particular theory both of how a system works and how that system might change. If we define democracy in terms of a much wider range of activities and forms of participation, we’re asking a very different question about how social change happens and how a good citizen should be actively involved.

Two perspectives on civic education then come up. One is that citizenship education should be geared toward creating people who are actively involved in sustaining the existing system. The other theme is that, actually, a good citizen is critically concerned and will challenge the existing system. It’s not just about being critical inside the system, but also criticizing from outside the system and possibly even engaging in activities designed to question and possibly confront the system.

How does all this change the way we teach civics? How should it?

Let’s talk about the implications for civic education. What are the goals? How do we go about educating people to be more active citizens? One of the answers associated with the concern that young people were not voting was that they don’t know enough about the system to want to vote for it. So one way is to feed them more knowledge. If they knew more about our constitution, they’d be really enthusiastic and go out and vote.

Another part of civic education is the opportunity to acquire skills: of communication; for conflict resolution; organization; also skills around getting information and organizing it, managing it for the cause one is working for, and so on. We need to provide opportunities for people to learn those skills through actual experience, in school or out of school.

Also a sense of values matters; it matters to care about something enough to want to do something about it. So one should reflect upon values in the civic domain, to get people to feel they have a personal stake in those values. We find that underpinning young people’s civic participation is often a strong moral sense. They feel morally involved and engaged, and because they feel a moral commitment, they feel a personal commitment that they should do something.

Are there other ways that civic education can inspire or engage young people?

A key element is getting young people to feel they have the capacity, the agency, to do something. This is partly through giving them the skills I mentioned earlier and the opportunity to practice civic action so that they can see themselves doing something, and that something effective is happening. This is where social media comes in. With social media, at least you have the illusion that your voice is being heard. Somebody might cite you, quote you or refer to you. That’s an incredibly powerful experience and is very motivating.

And behind all this is the importance of our culture’s narratives, the stories that tell us one can be effective, one’s group can be effective in challenging other groups. There can be a movement which changes things, there can be a way to make something happen. So it also is useful to bear in mind the stories we tell young people. They hear a lot about Martin Luther King, they hear a lot less, for example, about the Black Panthers. The heroic stories where people succeed get talked about, but we don’t necessarily give young people the narratives of the less successful, who are equally important in understanding how civic processes work.

These are all important issues and questions to think about in creating effective civic education for all young people. Many people, in formal school contexts and in informal after-school or community contexts, are trying exciting ways of involving young people, giving them a sense of agency, helping them to gain a vibrant civic identity. And we are watching how young people themselves initiate action, and in particular, how they use social media as a tool of civic action. It’s an exciting time. Research Stories
Lessons from — and for — Black History Month
Renewing an annual tradition by recovering its emphasis on racial justice and empowerment
Leah Shafer
Civics and History, K-12, Learning and Teaching