What will the next generation of learning in the STEM fields look like? According to newly released K–12 science standards, it will involve a lot more practice, with lessons that are experiential and investigative. One model of that new kind of learning is already here: EcoMOBILE, a project that uses augmented reality — virtual elements intersecting with real-world experiences — to teach middle schoolers about ecosystem science and the complex factors that contribute to a natural habitat.

“We’re trying to push the boundaries on how students understand ecosystem science,” says Amy Kamarainen, a senior researcher at the Harvard Graduate School of Education, who was invited to speak about EcoMOBILE at a forum on the future of STEM learning sponsored by the National Science Foundation and the White House.

Think about the discrepancies in how students and ecosystem scientists work, Kamarainen says. Most middle school students learn science in 50-minute blocks inside a classroom, memorizing formulas and theories that describe ecosystems. Working scientists spend weeks or months studying a real outdoor environment, basing their work on observations and experiments in that field.

With these disparities, how can middle school students envision what it’s like to be an ecosystem scientist?

EcoMOBILE bridges that gap. Spearheaded by HGSE Professor Chris Dede and HGSE Associate Professor Tina Grotzer, EcoMOBILE grew out of EcoMUVE, a four-week curriculum that lets students explore virtual ecosystems on their computers. Whereas EcoMUVE teaches students in the classroom about how different elements of an ecosystem affect one another over time, EcoMOBILE guides them out in the field. It lets students measure the health of their local pond by using real tools, collecting real data, and then analyzing that data to draw conclusions. 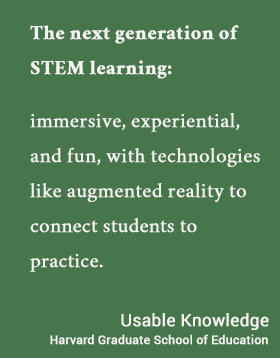 A group of 13-year-olds trek around a local pond on a science class field trip. When the students hold their phones up to their surroundings, one spots a glowing sphere in the distance. He and his peers follow the phone to the hotspot, where they find a toolbox containing dissolved oxygen sensors. They might use their phones to scan a QR code on the box, which triggers a “neighborhood guide” to pop-up and explain why these sensors are important.

The students then bring the sensors over to the water, where their phones show them a graphic of the bacterial decomposition happening at the bottom of the pond. “Does this affect the oxygen levels?” a new text box on their screen asks. They record predictions in their phones or tablets before plunging the sensors in to find out.

EcoMUVE and EcoMOBILE actively address the Next Generation Science Standards, which emphasize student engagement with scientific practices, as opposed to just skills. In a lecture, students may see the formula for photosynthesis. But with EcoMUVE, says Kamarainen, students are exposed to how to measure photosynthesis in an ecosystem. And with EcoMOBILE, they get to physically take those measurements using the same tools as real scientists.

On a “typical” fieldtrip, observations may be hard to record and remember. EcoMOBILE links the fieldtrip to classwork by providing a record of what students explored and the data they collected. Students can then take that data back to the classroom to discuss it, analyze it, and see photosynthesis happening.

Students who have used EcoMOBILE report that they notice intricacies in their own neighborhood ecosystems, such as pollution in a nearby stream, that they wouldn’t have noticed otherwise. And — perhaps unexpectedly — the project fosters collaboration. "What we found is, when you give the kids their own devices, but you give them a challenging activity to do, they end up working together," Kamarainen says. "They collaborate naturally. Kids are clustering up and going around the pond in teams and pairs, and it’s a productive collaboration too."

From Practicing to Accomplishing

In a new project from the EcoLEARN team, students will be able to get even closer to the work of ecosystem scientists.

With EcoXPT, inside a computer-accessible virtual environment, students will implement experiments to solve some of the problems they observed in EcoMUVE. They’ll integrate the practices they gained from EcoMOBILE to act as scientists do, making changes to strengthen the health of ecosystems. Research Stories
Ethics in the Classroom
A new way to find and explore the "right" responses to the toughest classroom dilemmas
Leah Shafer
K-12, Learning and Teaching, School Leadership