It was easy to assume that the projects — laid out on tables ringing the room, surrounding the educators who'd gathered for a summer workshop — had been commercially produced. The cookbooks, nature books, historical maps, illustrated posters, and other objects had all the originality, whimsy, and expertise you’d expect from professional artists and authors.

It was only when you looked more closely that you realized that these particular artists and authors were children, and that the works they had created were school projects, the results of long-term assignments that prized not a term paper or test score but the process of discovery itself.

The projects — models of high-quality student work in subjects across the disciplines, from classrooms across the country — were the focal point of a workshop for arts-inspired educators, part of a three-day professional development summit earlier this month called Arts and Passion-Driven Learning. The Harvard Graduate School of Education hosted the event with Silkroad, the cultural organization founded by cellist Yo-Yo Ma.

Descriptions and images of those featured projects and dozens of others are available at Models of Excellence: The Center for High-Quality Student Work, a newly launched, searchable repository of exemplary K–12 assignments that embed the visual arts with other disciplines. This archive, the largest collection of such work, is co-curated by HGSE and the Expeditionary Learning network of district and charter schools. 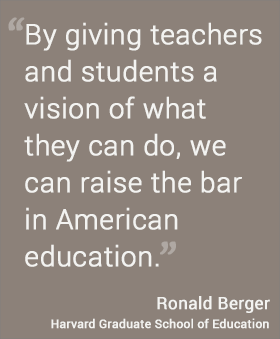 Teachers can use the Models of Excellence collection — which contains videos, writing samples, and other downloadable tools and prompts — as a foundation on which to create their own projects, raise questions, provoke thinking, and inspire excellence in their classrooms, says Ron Berger, Ed.M.’90, the chief academic officer for Expeditionary Learning.

Berger, an adjunct lecturer at HGSE, has worked for years with HGSE Senior Lecturer Steven Seidel, who directs HGSE’s Arts in Education Program, to curate the collection and launch the site. The goal, they say, is to set a high standard for student achievement and to help schools build a culture that values excellent work. When challenged and directed, students are capable of complex, deeply probing, and beautifully executed work, they say. But “kids need to see models of what’s possible,” Berger says. “By giving teachers and students a vision of what they can do, we can raise the bar in American education.”

The project aims to influence the national conversation about education reform by making the educational standards set by states more visible — explicitly connecting standards with student work that is characterized by depth, complexity, and imagination.

Workshop attendees got a behind-the-scenes look at one breathtaking project: an e-book called Slithering Snake Stories, created by second graders at the Conservatory Lab Charter School in Boston. Teacher Jenna Gampel described how she structured the project, which supported burgeoning skills in literacy, art, and science, and which stresses research, drafts, peer review, and perseverance.

Another project that drew attention was an exceptional set of notecards featuring drawings and descriptions of birds. They were created by kindergarteners at the Anser Charter School in Boise, Idaho, though they were so well produced that they wouldn’t have been out of place in a museum gift shop. In fact, the cards had been packaged in sets for sale to the public — even at rest stops on Idaho highways, among other settings.