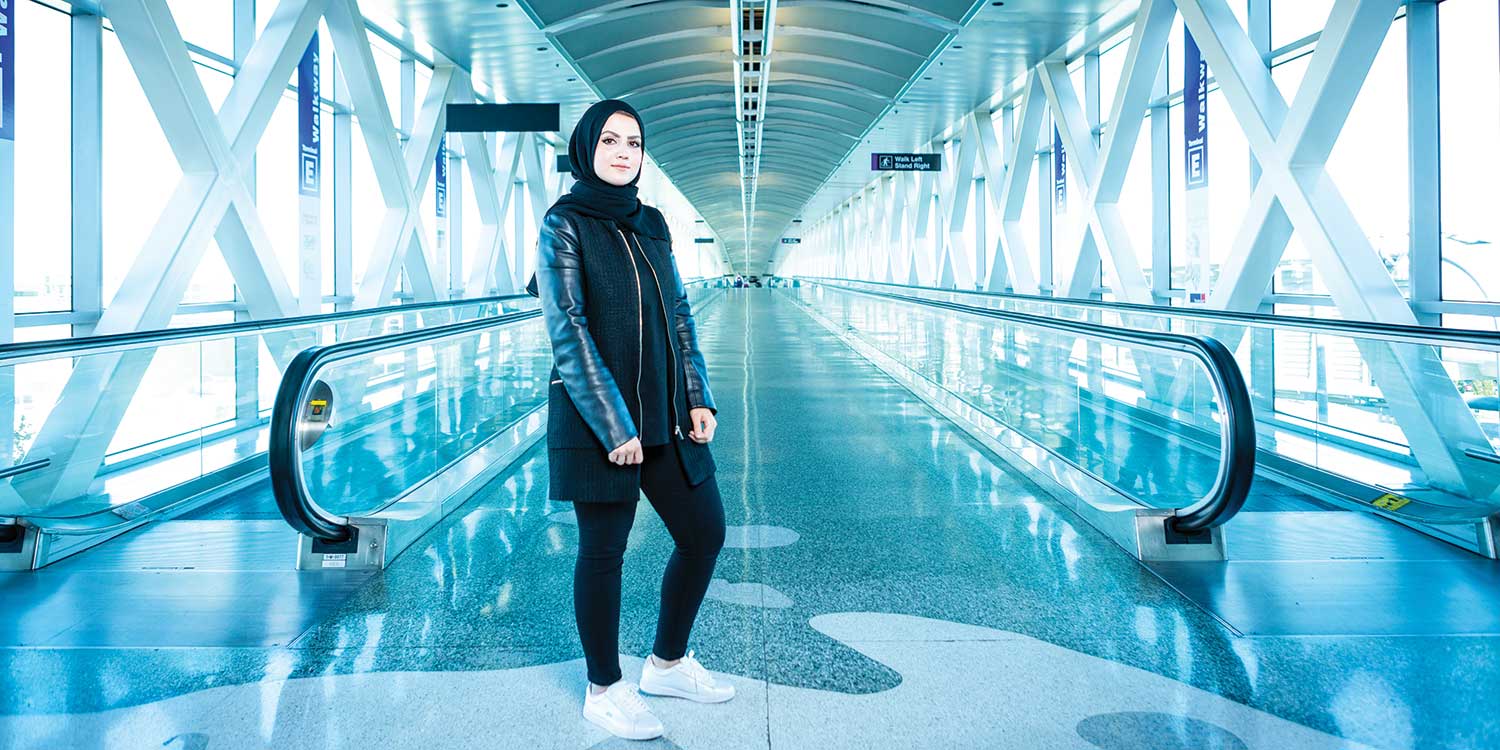 When a travel ban keeps you from going home.

Najwa Elyazgi, Ed.M.’19, arrived in Boston on August 22, after spending the summer, reluctantly, 450 miles away in Virginia. It had been three months since she had graduated from George Mason University. Her original plan had been to go home after graduation — to her parents’ home in Tripoli, the capital of Libya. She was beyond excited to attend a cousin’s elaborate six-day wedding and be there for her sister when she had her baby. She was going to go on hajj, a pilgrimage to Mecca.

“I was expecting a cheerful summer,” she says.

But none of that happened. In June, with her bags packed and awaiting one form from the Department of Homeland Security, Elyazgi learned that the United States Supreme Court upheld President Donald Trump’s right to ban people from certain countries from entering the United States. One of those countries was Libya. Elyazgi knew that if she flew home after graduation, she might not be allowed to come back to the United States to start her year at the Ed School as part of the Human Development and Psychology Program.

It wasn’t the first time her ability to pursue an education in the United States had been in jeopardy. In January 2017, while on a layover in Turkey on her way back to George Mason after the holiday break, Elyazgi was stranded at the airport.

“The same day, the travel ban was approved,” she says, referring to the first travel ban Trump imposed for citizens of Iran, Iraq, Somalia, Sudan, Syria, Yemen, and Libya. She was not allowed to board the plane to Dulles International.

When a federal judge temporarily blocked Trump’s ban a few days later, Elyazgi hastily booked another flight back to Virginia to finish her last few months as an undergraduate.

Now at the Ed School, she is again in limbo.

“I can stay in the United States legally; I just can’t leave,” she says. She also can’t have relatives or friends from Libya visit her — visitor visas for Libyans are not being granted to the United States. More than likely, when she graduates in May, she’ll have to repeat what she did at her George Mason graduation: During the ceremony, while in her cap and gown, she’ll have to FaceTime with family and friends in Tripoli.

“It’s a sacrifice,” she says, “but I’ve been waiting to be part of Harvard for a long time, so I couldn’t refuse the chance.”

One thing isn’t in limbo: She knows that after she graduates from the Ed School, she will — finally — head home. She already has a job lined up with the Ministry of Education, which offered her scholarships to attend George Mason and Harvard after she earned the highest grade point average among all Libyan students the year she graduated from high school.

“I will be working on designing a better education system,” she says. “Right now the system is very old-fashioned, based on memorizing information. Classrooms have boards and chairs only, and the curriculum is dense but dry and hard to grasp. I will be working with colleagues on designing a new education system for the long term and modifying the current one for im-mediate application.”

Until then, Elyazgi is happily settling in to her second semester after a warm welcome to campus.

“I was embraced with love and care even upon my arrival to Cambridge,” she says. “I have received emails full of support and help from all the faculty members at the Ed School, as well as many of my peers. Upon my arrival, everyone from the Office of Student Affairs to all my professors welcomed me and made me feel like I am home and not alone. I wish that every Libyan stu-dent receives the same greetings as I, and sees the true American manners. We come here to get an education.You can’t generalize on nationality. I’m not a threat.”