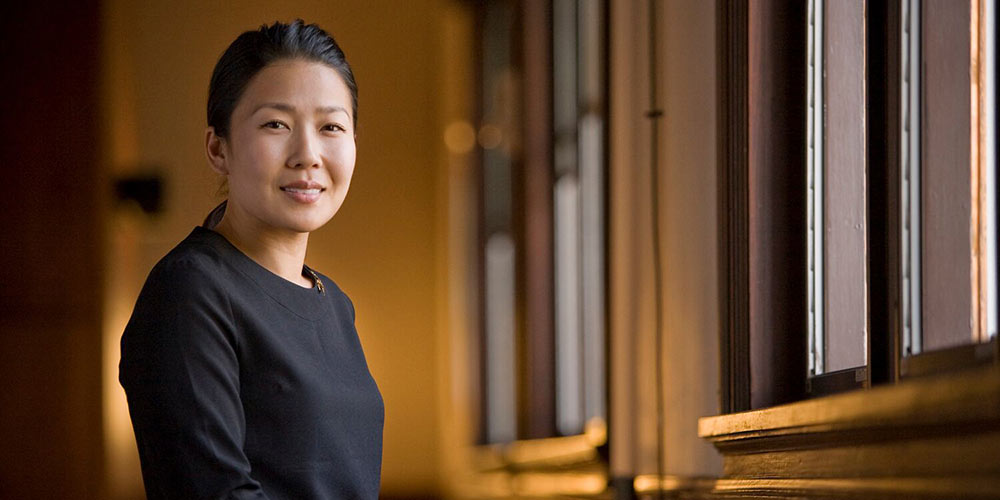 The Making of Lecturer Josephine Kim

When Lecturer Josephine Kim moved to the United States from Korea, first to Chicago and then to Virginia, she didn’t speak English. After getting all Fs on her first American report card, she questioned the fairness, knowing she never had the chance to learn the material. She was 8 years old. Now a licensed mental health counselor, Kim spoke to Ed. about growing up, a teacher who made a difference, and why she’s known as Dr. Self-Esteem back in Korea.

Hometown? The area of Seoul I was born and raised in until the age of 8 was characterized by dirt roads and lacking anything scenic like grass and trees. I distinctly remember a concrete roof tile factory that put gray dust in the air. The country was still in its recovery stages after being ravaged to shreds by war. Now, there are remnants of the occasional hole-in-the-wall corner grub, but contemporary architecture and green cafes sit between lined trees and flowers. The war-ridden, poverty-stricken nation has birthed the likes of Samsung, LG, Kia, and Hyundai. I’m very proud of my Korean heritage.

One thing about your childhood that had a lasting impact. My multiple immigration experiences, coming to the United States at the age of 8, being uprooted in my early teens to return to Korea, and then returning in my later teens back to the United States. Cultural brokering became a part of life, and I was constantly forced to reflect on my identity as a third-culture kid. Racial identity, cultural adjustment, and inclusion are what I live and breathe as a result.

Why did that first report card with all Fs affect you so much? Even as a young child, it didn’t feel equitable that I was evaluated on things I was never given the chance to learn. What they evaluated was my lack of access to education, and yet I knew their conclusions would be used to define their story of me as a student. Furthermore, I knew they would use my “failure” to define their story of all immigrant children. The sense of injustice I felt fuels the prevention work I do now.

Things turned around after a teacher tutored you during recess. Mrs. Janet Capps was the first person to grant me equal opportunity to learn in the United States, and, by doing so, she changed the trajectory of an immigrant child’s life. You said she saw you as a person, not just as a kid from Korea.She made me feel seen for the first time, and I’ve tried to see students for who they are, where they are, ever since. Many people can transfer knowledge from one brain to another, but not everyone can change a child’s life in the process. Even to this day, I strive to emulate my fourth-grade teacher.

What did you want to be when you “grew up”? I wanted to be the next Connie Chung, a news anchor who was the sole Asian American face I saw on primetime television. I even majored in broadcast journalism.

How did you end up becoming a counselor? It was fueled by realizing how much I could have benefited from having the guidance of a counselor during my adolescence when I was struggling to navigate between two nationalities and juggle multiple identities. I wanted to become that person for future generations.

You also started teaching. I grew up in a financially poor family, and the one thing I could do to earn money for tuition was teach English from a young age. I developed curriculum and thought about pedagogy long before I knew they were called that. While teaching was a means to survival at one point, I choose to teach now because I saw firsthand from Mrs. Capps what positive impact a teacher can have in a child’s life.

You also have an affiliation with the dental school? I direct the Office of Diversity and Inclusion at the Harvard School of KimDental Medicine and am an instructor in the Oral Health Policy and Epidemiology Program. Oral physicians are service providers, too, and their ability to connect with their patients determines whether that patient returns for more services. Unconscious bias and power differentials pervade all service fields, and policy and practice has much to do with granting or denying access to dental care. While it may not be so obvious, there are many parallels to the work I do at the Ed School.

In Korea, you have earned an interesting nickname. Ha! Yes, I’m known in Korea as Dr. Self-Esteem.

What do your parents think of this nickname? My parents are proud, sentimental, and apologetic. When I’m on TV or featured in the media, there is great pride but also a sense of deep regret for not being able to provide for more when I was younger. A lesson in life is that true blessings don’t come wrapped in money.

Are you surprised you positively developed your own self-esteem? Yes and no. Yes, because immigrant life can be turbulent, and it can strip one of dignity and opportunity. No, because I was privileged to have myriad protective factors in my life that buffered life’s challenges: parents who provided steady and consistent unconditional acceptance, a strong spiritual identity that allowed me to look beyond current circumstances, and teachers who practiced cultural sensitivity before such a thing knew to exist.

Finish this sentence: I love what I do because… each person matters, and you never know who is sitting in your classroom. It could be a future Dr. Self-Esteem.