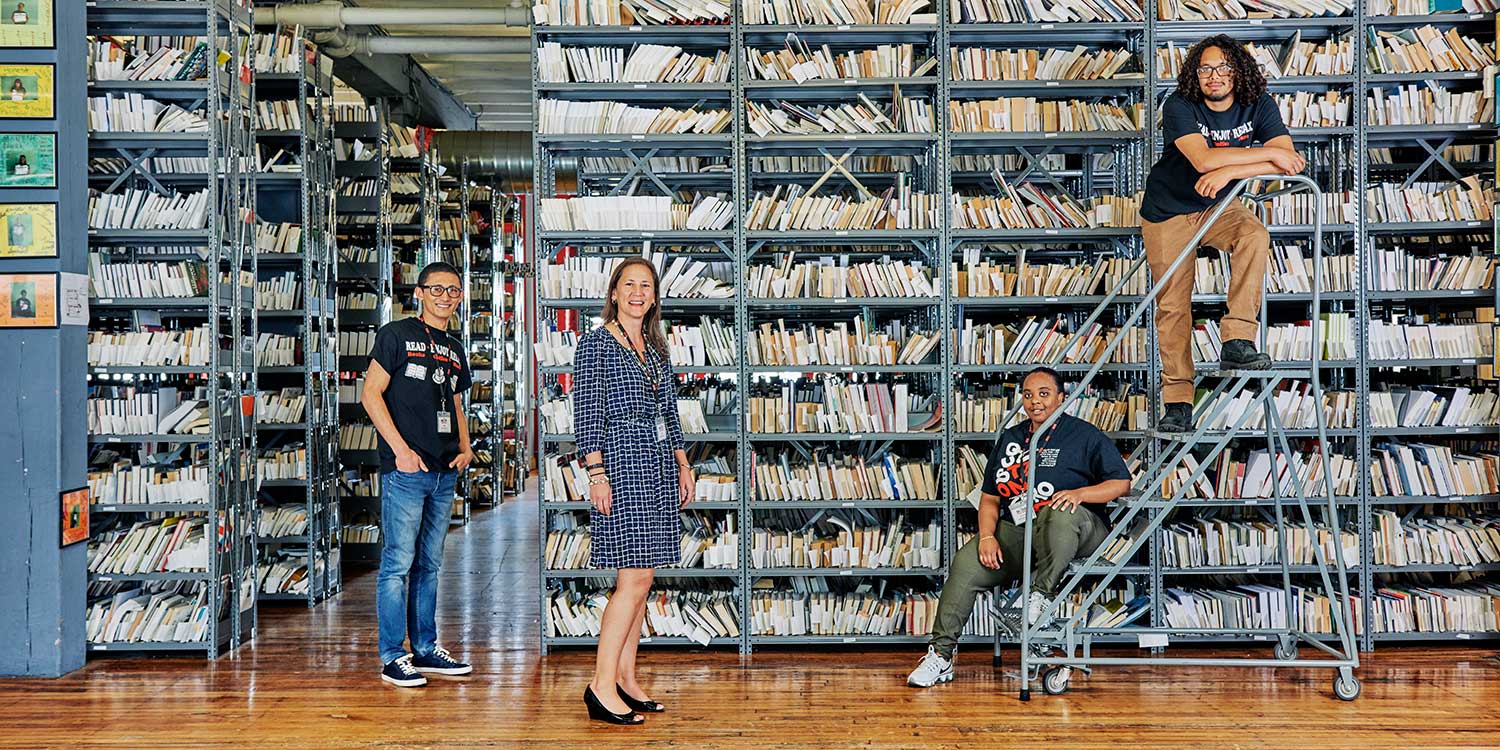 “These young men didn’t like books or technology or me telling them to pull up their pants,” she says, describing the first few weeks. But what they did come to like — what has helped the nonprofit generate more than $1 million in revenue annually — was power. Putting books into the system and seeing them sell made the teens feel something they hadn’t before: that they could make something positive happen.

At the time, Rosenbaum wasn’t exactly looking to start a bookstore, or any kind of business. But after teaching and working for years in the child welfare and juvenile court systems, she knew something was missing.

“I wanted to find a more measurable way to help young people move to better outcomes, not punishment,” says Rosenbaum. She saw that too many kids who are in foster care or are court involved fall through the cracks despite good intentions by others.

Then one day, a friend found a pile of books on the sidewalk and sold them for extra cash. Rosenbaum realized this was something young people could do. She reached out to a group home for teen boys and recruited her first employees — the four young men who liked baggy pants but not reading. They started collecting used books and in a tiny office learned how to read ISBN codes and enter books into a database. They learned about successful bookselling sites like Amazon and Alibris and how to track orders. They learned the importance of showing up on time and being accountable. The young men (and eventually young women) also learned critical life skills, what More Than Words calls the “you job.” How to open a savings account and set personal goals. How to advocate for yourself if, say, you’re unhappy in your current foster care situation. How to work toward either a GED, a college degree, or a trade. Only 20 percent of the young people start working there with a high school diploma; within two years post participation, the number jumps to 80 percent.

Rosenbaum stresses that the “you job” is the most important piece of the work they do.

“We want to help them persist and keep this job while also working on goals to eventually transition out of here,” she says. On average, workers stay for four months to a year. “It’s a balance of enough time to practice getting up every day and be accountable for 20 hours of work and going to school. Building that muscle takes time. But we say the real work starts when they leave here.” More Than Words continues to support each young person for two years after they leave through its graduate program, including ongoing training and mentoring.

Now 12 years later, with spaces in Waltham and Boston, More Than Words has become a serious enterprise. In its Boston loft space in the trendy Ink Block neighborhood, charts and white boards show daily and monthly goals and projections for the business and for each worker, using business terms that would rival those used at top MBA programs — something Rosenbaum says is intentional.

For 17-year-old Jahni Bell-Warren, it has meant a boost in confidence. During a tour of the space, his first as the tour leader, he talks about wanting to get promoted and being challenged.

“Me leading the tour today is new,” he says. “It makes you want to try harder. I also don’t wait anymore to be told what needs to be done. I know what I need to do, and I do it.” Eventually, he says he wants to start his own business.

Confidence and success also spill over to the business. More Than Words is growing, with pop-up book tables at farmers markets, festivals, and in corporate lobbies, allowing more interaction with the community. At any given time, there are 70 to 75 young people working. Last fall, the nonprofit broke ground on the construction of 10,000-square-feet of new space on the street level of its Boston location on East Berkeley Street, allowing it to add a cafe, a flexible performance room, and a retail space for books and local crafts.

Before More Than Words started planning for the new space, Rosenbaum asked her young people what they wanted to see. One of the answers was perhaps at first surprising: big windows.

But then Rosenbaum realized it made sense.