HGSE students come together and take action in the wake of the school shooting in Uvalde, Texas
By Lory Hough
June 9, 2022

Graduates hold black cards with messages about gun violence during Commencement ceremonies in Harvard Yard on May 26, 2022 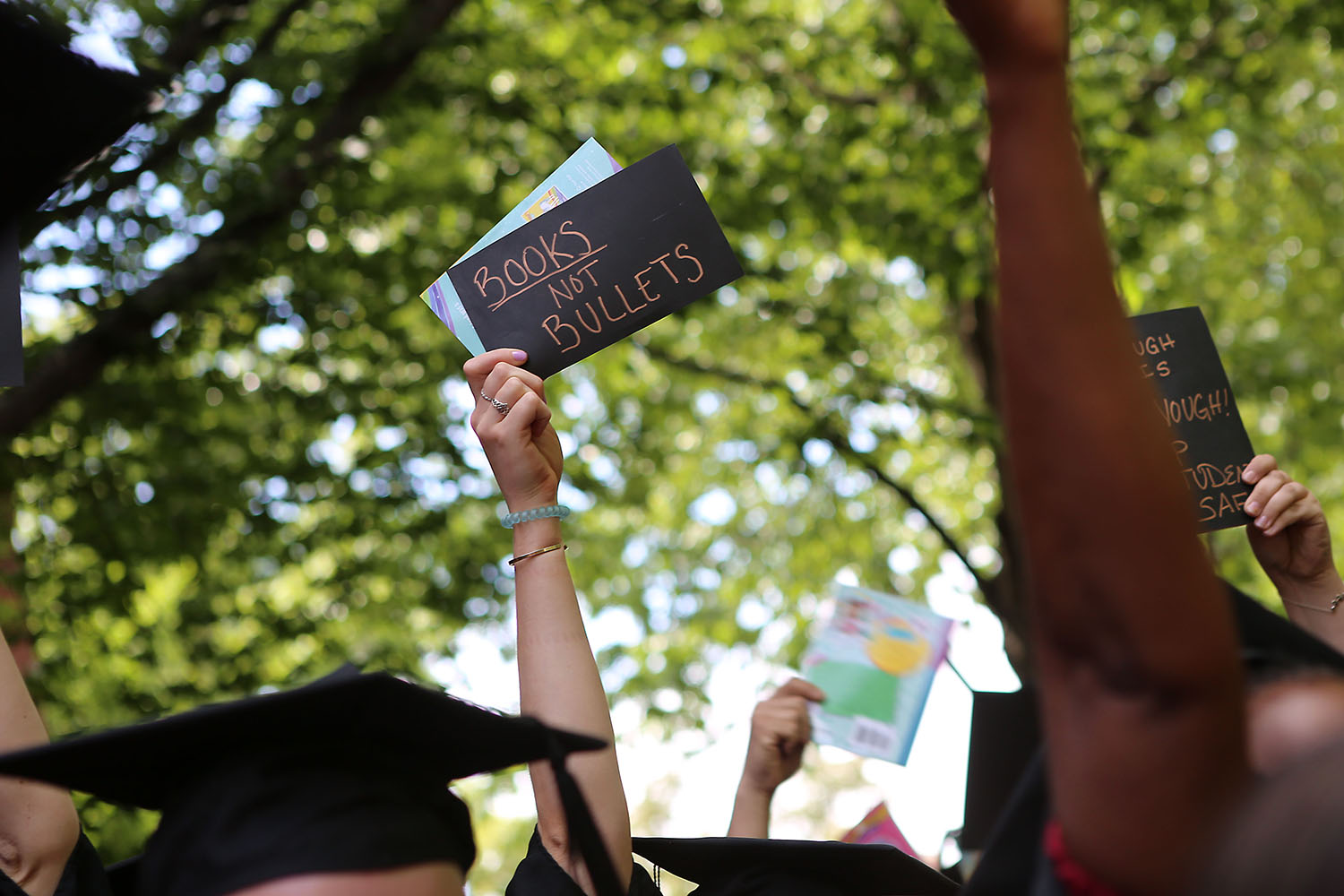 Graduates hold black cards with messages about gun violence during Commencement ceremonies in Harvard Yard on May 26, 2022

The morning after the shooting in Uvalde that left 19 students and two teachers dead, Peter Swing, Ed.M.’22, was wide awake, sitting at his computer in a hotel room. It was 2 a.m., and he couldn’t sleep. The tragic events that had just unfolded at the Texas elementary school had unearthed a lot of feelings. He thought about Sandy Hook, the 2012 school shooting where 26 students and teachers died — and the reason he and his family moved from the United States to Costa Rica. He thought about the friends he had lost over the years to gun violence, first growing up in a rough neighborhood in East L.A., and then later as a U.S. Marine.

“This really hit me,” he says. With his wife and children sleeping nearby, Swing logged on to the HGSE Commencement ’22 WhatsApp chat and started writing. He wondered how he and his classmates could honor those killed in Uvalde and how they could come together, as educators, to stop gun violence in schools. “I don’t usually take a front stance,” he says. “I’m one of those folks usually on the sidelines, but I really felt compelled to take action. I felt as educators that we had to do something.”

"It’s not someone needs to do something — it’s you need to do something, do it now, and find other people who want to do it, too." – Tanya Wright, Ed.M.'22

Classmate Tanya Wright, Ed.M.’22, was having similar feelings. She saw Swing’s post and started an off-shoot chat to brainstorm ideas. By 1 p.m. that Wednesday, a group had gathered on campus. Despite the hectic day they knew they were all facing — Convocation, a block party on Appian Way, other pre-Commencement activities — they started coming up with a plan to advocate for safer gun laws and better protection for students and educators in schools.

“We all knew that everyone who went to that meeting was invested in some way, shape, or form about the tragedy,” Swing says.

Patricia Vazquez, Ed.M.’22, suggested having students hold black cards with messages about gun violence in front of the children’s books that Ed School students traditionally hold at Commencement in Harvard Yard. Wright went out and got supplies while Katherine Montero, Ed.M.’22, and other students began making orange ribbons for the community to wear that week. The group worked with Commencement organizers to add in a 21-second moment of silence during the HGSE diploma ceremony — one second for every life lost in Uvalde. Catherine Pitcher, Ed.M.’21, and Haley Magwood, Ed.M.’22, started drafting letters on the group’s behalf to Massachusetts Congressional members, urging them to fulfill the demands of the Sandy Hook Promise and support legislation that flags violent material on social media. Another letter geared toward recent alumni includes templates so recipeints can write their own advocacy letters to lawmakers. 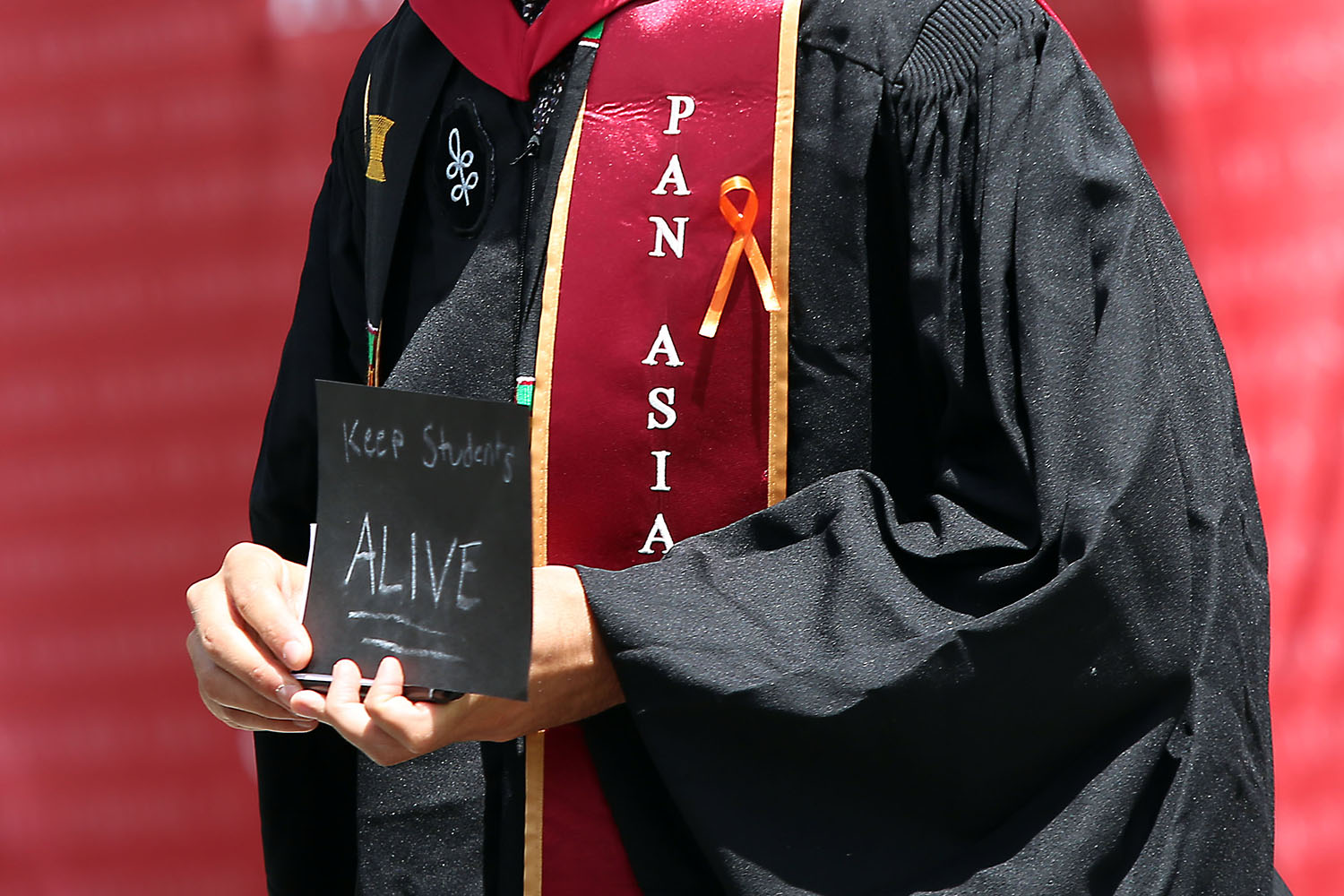 Magwood says her hope in reaching out to Senators Elizabeth Warren and Ed Markey and Representative Katherine Clark is, in part, to remind them that gun violence and mass shootings, like the one that happened recently in Buffalo, have occurred in minority populations for years without the same attention or care, and that time for making change is of the essence.

“Congress, on both sides of the aisle, must muster up the political will to make smart and safe legislation that center’s a child’s interests,” she says. “If Congress truly had a child’s best interest at heart, gun regulation would not be what it is today.”

Wright says she was pleased with how quickly the Ed School community responded to their ideas. “I was so heartened by the number of people who, just in the time we were outside at the block party that Wednesday, said, ‘Yes, give me a ribbon. Give me a black card. I’m down for this.’ Educators can’t be divorced from this, unfortunately.”

"Before HGSE, I was always looking for leaders to follow. HGSE taught me that we are the leaders, and we must make a statement." – Peter Swing, Ed.M.'22

“Sadly, the most recent school I worked at in Los Angeles before coming to the Ed School faced a number of violent threats,” she says. Although most of the threats ended up being non-credible, the school had an advanced evacuation plan that had to be carried out each time. “I’ve seen the real, palpable fear in those few minutes when we didn’t know if our building was going to be attacked or not. It was terrifying. When I first started teaching, we didn’t have active shooter drills, so I’ve seen the transition from not having drills to having them. The drills themselves can be traumatizing.”

For Wright, her “why” for taking action so quickly after Uvalde is also personal.

“My brother was slain by gun violence,” she says. “It was something that radically changed my life 15 years ago, in every way. I have a visceral reaction whenever these things happen because I know what happens to families when the news cameras are gone. I know the reverberating devastation that happens years after the offense. It is very real.”

Wright says that when she first heard about the shooting in Uvalde, her initial thought was that someone needs to do something. “And then I thought, why not me? It’s not someone needs to do something — it’s you need to do something, do it now, and find other people who want to do it, too. I have my time and peers at Harvard to thank for that." Although Wright has worked for years as an actor, she says, "I’m also not inherently a person who wants to get out front on conversations that are difficult or uncomfortable. But this was something I had to do and do in the moment, and I was ready. My time being here helped me to get there.”

Swing says he, too, was ready. As a father, as an educator, and as a U.S. Marine veteran, he was ready to use his voice to say that something needs to be done to stop the killings in schools like Uvalde, Parkland, and Sandy Hook.

“Before HGSE, I was always looking for leaders to follow,” he says. “HGSE taught me that we are the leaders, and we must make a statement.”